Home > Magazine > Features > Americana: From Lewis and Clark to Patel and Reddy

Americana: From Lewis and Clark to Patel and Reddy 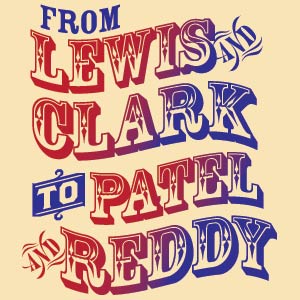 “There are two mistakes one can make along the road to truth...
not going all the way, and not starting.”
—Buddha

I am thinking of Lewis and Clark because as surely as they felt overwhelmed at the prospect of exploring the unchartered territory that would eventually constitute today’s America, I, too, am feeling overwhelmed. See, I have been invited to write this monthly column, “Americana,” with a mind to explaining this confounding and confusing land to this Indian-American audience. As honored as Lewis and Clark must have felt to receive “the call,” so I felt when I received my call. As fearful as Lewis and Clark must have felt as they considered the vastness of their subject, so I feel when I survey the vastness of mine.

It was Thomas Jefferson, our third United States president (1801-1809), who commissioned Meriwether Lewis and William Clark to explore the American West. At the time, America consisted of 17 states running from Maine to Georgia. With blank checks from the president in hand, Lewis and Clark began their epic journey near St. Louis, Missouri. Jefferson, wishing to establish transportation routes across the country, had asked Lewis and Clark to travel by water when possible, and they complied, traversing most of the country via the Missouri and Columbia Rivers. Three years later they reappeared with detailed maps, stories of a young Indian woman, Sacajawea, who saved the expedition (and by doing so made her way into American folklore), and thrilling stories of the rich and bountiful land beyond the Mississippi River.


Late one afternoon, Dave had a flat tire and was unable to perform the repair. I left Dave and pedaled the lonely road toward Harlem in search of help. When I arrived in the rundown town, I parked my bike and walked into Harlem’s only municipal building. It was there I met Liz Parenteau.

“No, I’m sorry, our town no longer has a hotel or campground,” Liz said, in response to my question. “Both closed a few years ago. Tell you what though, we’ll figure a way to get your friend back here and get his bike repaired. My home isn’t fancy, but you and your friend are welcome to stay with me. I’ll even fix you a home-cooked dinner.”

In the length of time it had taken me to pedal to Harlem and talk with Liz, another kind person had found and fetched Dave. My friend frowned when I gave him the news about the hotel and campground, but like me, was delighted in Liz’s offer.

“Why?” I asked Liz at the end of our evening. She understood my full question: Why did you, an educated woman in your early seventies, leave the material comforts of Seattle, Washington, to move to this desolate, shrinking, god-forsaken town that borders a struggling Indian Reservation? Indian Reservations are usually located on miserable and desolate lands that were provided to the tribes by the United States Government. Nearly one-third of Montana consists of such land.

“I came back to Harlem to make a difference,” Liz replied. “This is where I grew up and I don’t want the town to die. I’m even considering running for mayor next year. For us to grow, we have to reach out. By taking you two boys in, I wanted to show the people in our town that we all need to make the extra effort. We’re a small town so everyone already knows that you are staying with me tonight! Some will think that I will be beaten and robbed!”

I nodded politely, admired Liz’s courage and heart, but didn’t say what I felt—Liz, it’s hopeless. Because of farm automation, fewer workers are required. Fewer workers mean people leave. And how do small, isolated towns compete with the larger cities that offer job opportunities…and excitement?

Some historians prefer the “great man” perspective, believing that history is best analyzed by focusing on epic leaders such as Lewis and Clark, George Washington, Martin Luther King, Akbar, Chattrapathi Shivaji, and Mahatma Gandhi. There is wisdom in such an approach, and we will use the great-man approach in “Americana,” but we will also cover history and culture through the lives of otherwise “ordinary people,” such as Sacajawea and Liz Parenteau.

Dave and I continued our journey in the northern High Plains, with many of our miles taking us along the same general route traveled by Lewis and Clark. Their discoveries and maps were instrumental in paving the way for the immigrants who were to follow. By following their trail, we observed the outcomes of their efforts, our senses sharpened by our chats with Liz Parenteau.

The railroad tracks that had been our constant companion since Washington State became more than just a modern rail hauling goods and people across the country. These were the tracks that were laid in the 1860s by Irish immigrants from the east and Chinese immigrants from the west, tracks that allowed millions of immigrants from European countries to travel deep into this new land of opportunity. The Railroad Act of 1862 facilitated the building of the American West. The Homestead Act of the same year, by all but giving 160 acres of the undeveloped land to citizens and non-citizens, encouraged immigration. Both laws were signed by President Abraham Lincoln during the Civil War (1861-1865), or, as we call it in the South, The Recent Unpleasantness. As Dave and I meandered our way across the country, we felt the cultural heritage of these early immigrants in our chance encounters.

Arly became more than just a Minnesota welder who repaired Dave’s bike frame. With his gentle manner and Swedish accent, he became a fine ambassador for the nearly one million Swedes who immigrated to America from 1870-1900. Many of the Swedish immigrants settled in cold weather states, such as Minnesota and Wisconsin.

The five Meister boys (and six Meister sisters!)we met in Illinois became more than just boys handing out popsicles to weary cyclists. Many Germans, eager to leverage their farming skills, migrated to the bountiful Midwest.

In eastern Kentucky we tasted the darker side of America and of our own selfish desires. Not happy that people didn’t say “hello,” we condemned all in the region. It was easy. After the journey, when I had read the full story of Appalachia, including the exploitation of the early immigrants and the history of the coal mines, I was embarrassed for my lack of knowledge and compassion.

Our democracy, as too many can attest, has never been perfect.

On July 4th, 1993, Dave and I finished our journey in New Bern, North Carolina. As our last miles passed, I could hear the refrains of a song written by the great American composer Woodie Guthrie:


This land is your land, this land is my land
From California to the New York island;
From the redwood forest to the Gulf Stream waters


This land was made for you and me.

This land, in all its confusing twists and turns, history and diversity, is indeed our land. I am honored to have been asked to share its mysteries with the Indian-American community.

[For an editorial introduction of this new column and the columnist, please see page 8.]