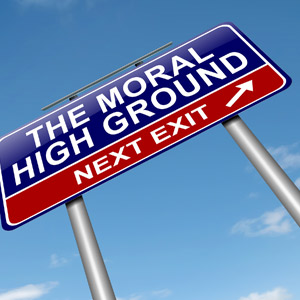 Do-gooder political correctness versus the genuine article, the conscientious individual.

Several years ago, I received a call from an IBM account team, asking if our company might be interested in performing some technical services on their behalf. Sure, I said, send me your proposed agreement. I was halfway into their legal masterpiece when I came across a requirement so odd that I grabbed the phone and called my dad, knowing that he, given his 35 years of working for the conservative, straight-laced company, would be eager to weigh in with an opinion. After explaining the basics, I got to the point.

“Dad, on page 106 it says that if we elect to subcontract portions of the job, we will use reasonable efforts to hire gay-, lesbian- and transgender-owned companies to perform the work.”

I paused. Stifling a laugh, I asked, “What kind of company did you work for, anyway?”

I am of Irish-American parents. Our gift to the melting pot is wit and perspective, the ability to laugh at all misfortunes, including our own. If you wish to engineer a rocket ship that lands in the right place, find a German. If you wish to deal with the stresses of American life, without the benefit of a shot or two of whiskey, find a Buddhist, Hindu, or Jain. We Irish have something to say about everything, except, evidently, about the sentence, “You will use reasonable efforts to hire gay-, lesbian-, and transgender-owned companies to perform the work.”

Did I lose my cell phone connection or did Dad just suffer a massive stroke?

“Billy,” Dad finally mumbled, “that’s not the IBM I remember. Why is such language even in an IBM business contract?”

To me, social responsibility is the work that God would have us do, but which more often than not, fumbles when awkwardly thrust down our throats by church, government, or business.

Take the church, for example. America’s earliest and most influential settlers were the religiously conservative, God-fearing Puritans. It is tempting to think that the combination of their homogenous culture and avowed commitment to the teachings of Jesus Christ would yield an idyllic, Garden of Eden society, but it did not.

Nathaniel Hawthorne set his classic 1850 American novel, The Scarlet Letter, in the Puritanical era. It is there that we meet one of America’s most iconic female figures, Hester Prynne, walking stoically in the woods, holding her daughter’s hand. We know from the large red “A” that is embroidered on Hester’s dress that she is an adulteress, and that her child, Pearl, is a bastard. For her one mistake, Hester is damned to the fringes of society. The Scarlet Letter takes dead aim at religious hypocrisy, and reminds us that the << We Irish have something to say about everything, except, evidently, about the sentence, “You will use reasonable efforts to hire gay-, lesbian-, and transgender-owned companies to perform the work.” << religious institutions are imperfect arbiters of social responsibilities, particularly in a pluralistic democracy.

Contrived goodness fares no different in commerce. Adam Smith, the father of modern economics, in his still-influential 1776 book, An Inquiry into the Nature and Causes of the Wealth of Nations, writes:

Every individual generally neither intends to promote the public interest, nor knows how much he is promoting it ... He intends only his own gain, and he is in this, as in many other cases, led by an invisible hand to promote an end which was no part of his intention. Nor is it always the worse for society that it was no part of his intention. By pursuing his own interest he frequently promotes that of the society more effectually than when he really intends to promote it. I have never known much good done by those who affected to trade for the public good.

A friend of mine, Mike Bressler, teaches political science at Furman University. Several years ago, we attended the same church. One Sunday morning, after a week of depressing national headlines, I asked Mike if we were “headed the right way,” if the trajectory of the human condition was improving. Mike thought for a moment, and said we were. After the lousy week of news, I needed to hear those words. Later that morning, as I exited the church, I took special note of a small rectangular sign on the edge of the church grounds: “You are now entering the mission field.” The battle between our social responsibilities, as taught by Jesus (and the world’s other great religious teachers), and our earthly desires, is a daily struggle. In truth, however, the stakes for most of us are not nearly as high as they were for many in an earlier period of American history.

I have friends who believe that the Civil War was about “state’s rights” and not slavery. I disagree. One hundred and fifty years before the Civil War, most of our area’s priests, ministers, and rabbis were vocal in their opposition to slavery. Predictably, the rich and powerful pressured the ministers, so much so that most of the religions, except one—the Quakers—quit their public denunciations of slavery and tried to work “within the system.” The Civil War was about the rich and powerful remaining so.

A much stronger federal government and a horrific Civil War would eventually correct America’s greatest social injustice. But government is imperfect, too. It would “only” take another 100 years for the federal courts to decide that “separate but equal” schools for blacks, were not equal.

We take our leave of our imperfect institutions to recognize our country’s greatest strength—the individual who sees the work that God would have us do, and takes action. Individual inspiration—not social dictate or political correctness—is the moral engine of this country. There is the story of Rosa Parks, a not-|so-ordinary black woman who, in 1955, refused to relinquish her bus seat to a white person. Wealthy, turn-of-the-last-century industrialists—men like Andrew Carnegie, John Paul Getty, and Julius Rosenwald—defined philanthropy. Throughout American history, millions of volunteers of all faiths, colors, and religions, deliver meals to the infirm, pick up highway trash, build houses for the poor. According to most studies, we are the most generous people on the earth with our time and money, and are the most likely to lend a stranger a helping hand.

Today, the “Millennials,” my daughter’s generation, consider “corporate social responsibility” as one serious matter, even a determining factor in where they work and shop. To my dad’s generation, and to mine, the purpose of business is to make money.

“Did you ever say anything to the IBM team about that strange language?” Dad later asked me, a few months before his 2007 death.

“I did.  I told them in order to fully comply with all terms and conditions, including the stuff on page 106, I would ask any prospective sub-contractors if they were gay, lesbian, or transgender. The IBM rep screamed no, you can’t do that!  Hold on, I said, how will I know their orientation if I don’t ask? It got quiet. I thought I had lost my cell phone connection or that he had suffered a stroke. Then, finally: ‘Bill, just sign the damn agreement!’”

My dad, who taught me the most American of lessons—to not care if someone was gay, lesbian, or transgender as long as they could do the job, because it was simply the right thing to do—laughed.