Americana: HER Journey through American History 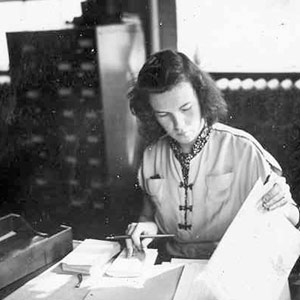 A look at the women’s suffrage movement and the struggle for equality.

Photo: The author’s mother, Doris Fitzpatrick, worked as a clerical assistant in a factory, in 1942. Today, at age 93, she has sharp recollections of times women had limited career options.

It is humbling to reckon that I have a living link to an era in American history when women could not vote. The year my mother was born was just a year shy of the passage of the 19th amendment which finally awarded women the legal right to vote.

Women of my mother’s generation, therefore, grew up where the right to vote was fought for and earned by the previous generation. But the battle for “equality” had yet to be fought. Due to seminal events such as the Great Depression and World War II, that issue would lie dormant for many decades.

My mom, who is now 93 years old, has sharp recollections of her early adult life. “In my day, women had very limited career options. Even though I was class valedictorian of Torrington High School in 1938, it was expected that after I graduated, I would get married and raise a family. It wasn’t fair. Your father, as an example, was an average student at best. Yet, he was the one who had the career.”

“I begged with my parents after I graduated in 1937. ‘Please let me go to Washington and get a job,’ I asked, but they said, ‘No, it isn’t proper for an unmarried girl to live in a big city.’ My life might have turned out much differently if I had just been allowed the opportunity to work.”

In May, we celebrated Memorial Day and by doing so honored those courageous men and women who gave their lives in defense of liberty and freedom. Less celebrated and often forgotten are other men and women who also risked much, not in physical combat in distant lands, but in social revolutions for black equality, gay rights and women’s liberation. Their battlegrounds were the streets of our cities and the courts of our land. Given the ongoing stories about women’s rights both here and abroad, now is a fine time to take a quick journey into the history of the women’s movement in America.

Today, it is hard to imagine that less than a hundred years ago women were not allowed to vote. Susan B. Anthony, born in Massachusetts in 1820, became an outspoken, tireless and persevering advocate for women’s right to vote. In doing so, she became known as America’s leading “suffragette,” a word derived from suffrage, meaning “right to vote.”

Elizabeth Cady Stanton, born in New York in 1815, is also a noted activist for women’s suffrage. She joined forces with Anthony, and the two of them devoted their long lives to righting this injustice. Sadly, both Anthony and Stanton died in the in the early 1900s, well before the passage of the 19th Amendment in 1920, which prohibits denying any United States citizen the right to vote based on sex. 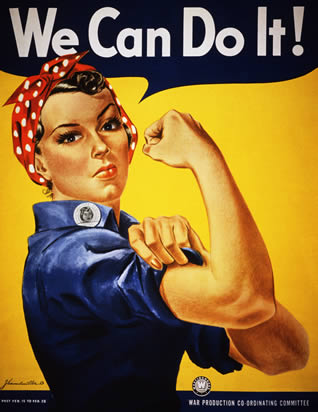 Like many other young men and women of the day, Mom and Dad married just before Dad left to fight in World War II. With the outbreak of World War II, Mom, along with millions of other women, shed her traditional female role and went to work in a factory that produced wartime goods. For most women, it was their first taste of life outside the kitchen, and they liked it. However, when the men came back from the war, women were expected to leave their satisfying jobs and fledgling careers, forget this world of new possibilities, and return home to make dinner and babies.

On one level, 1950s America appeared placid and calm during that era, as men and women lived in their traditional roles, just as their parents and grandparents had. Yet, beneath this veneer of pleasant suburban living many women were very angry, as Betty Friedan, a famous figure in the women’s movement found out.

In 1957, Friedan, then a housewife, conducted a survey for an upcoming college reunion of her graduating class at Smith College. The purpose of the survey was to refute the then-current thinking that a college degree kept women from adapting to their traditional role of wife and mother. Instead, she found that most of her fellow graduates expressed a gnawing dissatisfaction with their traditional roles. Ms. Friedan then famously called it “the problem that has no name.” Her book, The Feminine Mystique, is considered one of the most influential books of the last century.

These resentments, no doubt, impacted the way mothers raised their daughters and sons. In our household, I often heard Mom, and Dad for that matter, tell my three sisters that, “they could be anything they wanted to be.” There was no less expectation for them than there was for me. To my parents’ great credit, we were all treated equally.

In the mid 1960s, women entered the workforce and demanded “equal pay for equal work.” They wanted to be more than just secretaries, too. Unlike their moms, they weren’t going to swallow their ambitions. “Women’s Liberation,” or “Women’s Lib” for short, became one of the seminal social revolutions of the 1960s. Toss in the invention of the birth control pill in the early 1960s, and voila, we have a sexual revolution to boot!

In the late 1960s and through the 1970s, television and movies began to portray women in a different light. The stay-at-home moms featured on the television shows of the 1950s and early 1960s were gone, replaced by outspoken and independent women, capable of managing just fine without a man. The iconic television show, Mary Tyler Moore, offered a first in the form of strong-willed, professional women in starring and co-starring roles.

But as a reminder that the women’s movement is hardly limited to this county, in advance of a trip to India, I watched and enjoyed the film Mahanagar (The Big City). It is a well-told and affirming story of a woman having to leave home and earn money to support the family, and the impact the event has within the household. The movie was released in 1964, about the year that women’s rights was becoming a national discussion in our country.

One of the most famous Supreme Court cases, Roe vs. Wade, occurred in 1973. Essentially, it provided women much greater rights in regards to abortion.

By the time I began my business career with AT&T in 1978, the federal government had passed many laws against discrimination on the basis of sex or race. As a result, progressive corporations implemented Affirmative Action programs, meaning that minorities such as women and blacks were given priority when hiring or promoting. As a white male, I was impacted and in truth felt angry at times, for reverse discrimination was now taking place. Promotions that I had clearly earned went to less qualified minority candidates. I understood that a necessary social correction was taking place, but I didn’t want it to be at my expense.

The gains the women’s movement made in the 1960s and 1970s were absorbed and consolidated in the 1980s and 1990s. Career-oriented women, for example, had to deal with both these new pressures of work, and their often guilty feelings about not being traditional homemakers, like their moms. In short, my American sisters had to learn they didn’t have to be “superwomen.” My American brothers, on the other hand, had to learn how to help at home by cooking dinner, washing the dishes and putting the children to bed. My dad and I shared a laugh when my daughter was a baby and he watched me change her diaper. A bit embarrassed, he said, “I never had to do that!”

Much has been gained since the days of Susan B. Anthony, but much work is ahead.

Other countries, as an example, have had elected women as their heads of state. India can point to Indira  Gandhi, the British to Margaret Thatcher, and the Germans to Angela Merkel. Some American businesses and industries remain remarkably white and male at the top of their organizations. This hopefully is rapidly becoming a dated phenomenon. The CEOs of IBM, HP, and PepsiCo, as an example, are women. That trend bodes well for the future.