Home > Magazine > Features > Among the last Jews of Kolkata

Among the last Jews of Kolkata 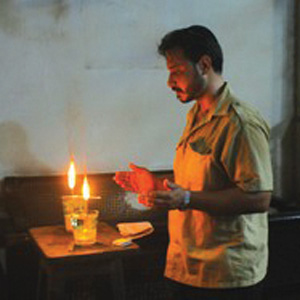 (on this page) Shalom Israel lights
candles every Friday in the
city’s three synagogues.

I enter the Jewish community of Kolkata, or what’s left of it, through Nahum’s Bakery, famous for its plum cakes. It’s a small shop inside a labyrinth of equally small shops known as New Market, near the British-era government houses of Dalhousie. The experience is a little like going through Customs. Mr. Hulda is the business associate of David Nahum, the bakery’s owner and leader of the community, who is past 90 now and in seclusion.

Hulda asks me who I am, why I have come, what I wish to see of Kolkata Jewry. “Almost all the Jews that remain are very old,” Hulda cautions.

There are fewer than 40 Jews out of a community that numbered 5000 at the end of the Second World War. The creation of the State of Israel, the Hindu-Muslim bloodbath accompanying Partition, and Jewish insecurity about what lay in store for them in post-colonial India—all contributed to the mass exodus of Jews from Kolkata.

Hulda writes down for me the phone number of Ian Zachariah. “You can talk to him,” he says, implying there are those I can’t talk to. David Nahum, for instance. I call Zachariah. He sighs. “Another journalist,” he says. I laugh. “How many can there be? Hardly anyone is aware of Kolkata’s Jewish community.”Zachariah tells me to meet him at the Haldiram Mall in Bollygunge in South Kolkata. I wait for him in the bright, squeaky clean Food Court, the clone of a St. Paul mall (back in the States) but for the pyramids of crusty, ghee-infused ladoos.

When he arrives at our tiny metal table, Zachariah, a burly, gregarious 64-year-old, gets right to the point: “We have 10, maybe 15 years left as a community. That’s all.” The retired ad man for J Walter Thompson/Kolkata does what he can. He is on the Burial Society Committee, the School Board (the Jewish community runs the Elias Meyer Free School for boys and the Jewish Girls School, neither of which have a single Jewish student), and the Charity Committee.

“Given how old almost everyone is (its three young youngest members are in their 30s, two brothers and a sister; most are in their late 70s and 80s), many are alone and ill. They need money and personal care to help them get by.” I feel with Zachariah that I am in the presence of a decent man who knows all there is to know about limits. In Jamshedpur, the steel town in the state of Jharkand where Zachariah grew up, his was the only Jewish family. His father sent him to a Catholic school. He still recalls the running joke between the priest and his father: “When are you becoming a Catholic?” the priest would ask. “On your wedding day, Father,” his father would answer.

His story reminds me of my youth in the Bronx listening to Jewish stories about navigating the tricky waters of the Christian world. Like the time my clueless Aunt Ellen wiped the charred mess off a co-worker’s forehead on Ash Wednesday. But India is not a country with an anti-Semitic history. (Even Bal Thackeray, Mumbai’s Hitler-enamored leader of Shiv Sena, ﬁnds no traction among Indians with his views.) Thesedays, in fact, many  Hindus, in appreciation of Israel’s “hit back hard” policy against Muslim terrorists, are rather well-disposed towards the Jewish State.

“Myself, I feel strongly Indian as well as Jewish. India is democratic and tolerant. Sure, it’s chaotic, but it’s my country,” says Zachariah.

I ask Zachariah how safe Kolkata’s Jews feel in the post-Mumbai Massacre era, with its slaughter of Jews by Muslim militants at Nariman House, which houses the Jewish Center in Mumbai.

“Right after the massacre, I got a call from one of the journalists here who wanted to know what the Jewish community was doing about security. I told him there were few Israelis here and no Jewish center. There was no need for extra security.” Zachariah smiles ruefully. I understand its meaning. How can you take away the future from those who have none? Just as Hulda gave me his name, he gives me the name of Flower Silliman. “She is the only Jew I know who left Kolkata and came back. Her daughter lives here.”

Flower Silliman, 80 and sturdy, and like Zachariah a member of the school board, meets me on Mother Teresa Sarani, outside the Jewish Girls School of Kolkata, which she attended as a young girl when her mother was principal. The school, despite its exclusively Hindu and Muslim student body (Muslims being the majority), is closed on the Jewish Sabbath (Saturday) and on Jewish holidays. But no Jewish subjects are taught, and the standard Indian curriculum is upheld.

“Muslim families choose our school, even though it means their girls can’t wear the hijab, and there are no Muslim studies,” Silliman informs me, “because they know that the Jewish Girls School is a top-rated school. Jews and Muslims in Kolkata have always gotten along."

I watch Silliman chat up the girls in their white-and-burgundy uniforms, like a good Jewish memsahib. She is a Kolkata-born daughter of Jewish traders from Iraq. Her husband, David Silliman, was a direct descendant of Shalom Cohen, Kolkata’s ﬁrst Jew, who came to India from Aleppo, Syria in 1784, to be the court jeweler of the Nawab of Oudh. Kolkata’s Jews were originally all from the Middle-East. She recalls from her youth a Ms. Kreiger from Palestine, as Israel was then called. “She came to teach us Hebrew. It was hard when all the Jews began leaving, but by then we had Indian friends. We adjusted.”

Silliman points with pride to the signs the students made for a Kolkata school contest on the treatment of Indian girls. One sign decried the triple-pronged problem of child labor, lack of education and domestic violence. Another dramatically opposed female infanticide, showing a man with a cruel, Hitler-like mustache tossing a little girl into a dustbin. I wonder about the mustache, and think of asking Silliman about the aspect of demonic resemblance, but I decide not to. The Jewish Girls School was the contest winner.

“Kolkata has given us so much,” Silliman reﬂects. “In this way, through education (the school is very well endowed by the Jewish community), we are able to give something back to Kolkata. This school will be here long after we are all gone.” Kolkata’s three synagogues, Beth El, Neve Shalom and Magen David, stand empty, except on Friday afternoons, when 37-year-old Shalom Israel lights a candle in each. Israel stands in for his fellow Jews for whom observance is conﬁned to their homes now. The caretakers of the synagogues are Muslims, and the sites themselves are under the protection of the Indian government via the Archeological Survey of India.

Israel also visits the sick, washes the bodies of the male dead, tends to the thicket of graves in the walled-in Jewish Cemetery of Kolkata, not far from the Hyatt Regency in the northeast of the city. I ask Israel what everyone else asks him.

“Why do you stay?” He smiles at me with the weary elasticity of an old man. A work-related acquisition, I suspect. I notice he also walks with a slight stoop. “It’s not easy to just go,” he adds. “Sure I could go to Israel. Probably I could ﬁnd a job there, maybe on a kibbutz. But why should I go? What could I contribute there? Here the community needs me. And the community is what’s most important.”

I think of the immobility of this community tucked inside the wildness of India, always on the move. I think of India, and its genius for absorption as it moves, an immense and generous river.
[New York-based Robert Hirschﬁeld has written for Outlook, India Abroad, Sojourners, and Matador, among other publications.]