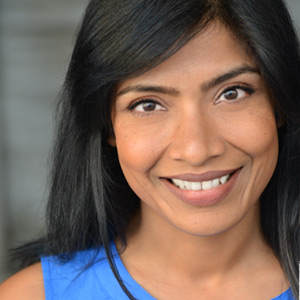 (Left) Deepti Gupta is amongst those artists who have pursued genuine self-expression over chasing fame.

The passions and pitfalls encountered by brown artists—transiting between clichéd roles and mainstream ones, and their need to carve out their own paths.

Pursuing a career in acting and theater is hard enough even in the mainstream. For South Asians it is much more so, considering the lack of support, let alone enthusiasm, for such pursuits from parents and the community. Then there is the dire lack of desirable roles for brown-skinned actors.

When the brave few break through these barriers, it is often a good indicator of their passion for self-expression.

“In a culture where fame is sought, and professions that are looked up to are those that have some level of fame attached to them—when there isn’t any [fame], what are people doing for self-expression?” asks Deepti Gupta, who has acted in Pakistani serials such as Neeyat, Malaal, and Pehchaan, earning her a following not only in that country but also in India, thanks to Zee Zindagi. As an actor in these serials, she has had shoots in the Maldives, Australia, and Cape Town.

Gupta’s current project is a lot less glamorous. But no less satisfying. Now based in Los Angeles, California, she began working on a podcast series earlier this year. Tentatively titled An Immigrant’s Living Room, the podcast will eventually culminate in a live performance onstage. Gupta is capitalizing on her background in theater and her experience providing voiceovers for an eclectic collection of audio books.

“The premise for the podcast is to share immigrant stories, but from the angle of the five senses and not necessarily in chronological order,” she shares. “Each episode of the podcast will feature an interview with immigrants from different parts of the world who have established a life in the U.S., zoning in on stories that are not about the why and how of the immigration but the relationships, how things are different ‘here’ in the U.S. and ‘there’ where they come from, and how this one person holds the two worlds together in their body.”

Praised by The New York Times for her performance in the feature film Walkaway, Deepti’s acting and voiceover career spans India, Singapore, Pakistan and the United States. No stranger to solo pursuits, Gupta previously conceptualized and performed a semiautobiographical show called Bodylogue, addressing skin color, beauty, and being a woman, and how these factors impacted her experience in the three different countries. 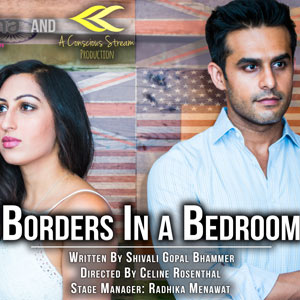 “I ended up falling into playwriting and production out of the frustration that there really were no roles that I felt I could play that were available,” says Shivali Bhammer, talking about the motivation behind Borders in a Bedroom.

Discovering her own solo journey is Shivali Bhammer, a playwright and actor in Borders in a Bedroom, a play performed at last year’s Tamasha NYC Festival of South Asian Performing Arts, earning awards for best playwright, best production, and best actor for her male co-star Shezi Sardar, a former Atlantan. They will perform next at the London Camden Fringe Festival in August.

Bhammer, a British Indian, had quit a lucrative career in investment banking to pursue her love of the performing arts. Even while she was employed in the banking sector in the U.K., she had already been singing devotional songs and fusing it with Western music for it to be more accessible to the younger generations. She drew the attention of Sony Music in India who signed her as a recording artist. So at 22, she was digitally releasing urban contemporary bhajan albums and performing at concerts in the U.K. and in India.

In Borders in a Bedroom, she plays the female lead role of a British Indian Hindu girl in a relationship with a Pakistani American Muslim. They fundamentally recognize themselves as British and American respectively, yet simultaneously Indian and Pakistani. The play is about how they debate all the ways in which they love each other, and how they react to everything going on around them through their unique identities.

“I ended up falling into playwriting and production out of the frustration that there really were no roles that I felt I could play that were available,” admits Bhammer, who moved to New York about three years ago. She found the culture in the performing arts sector quite different from that in the U.K.—she was surprised to be labeled a person of color or South Asian—something she did not experience in Britain. “I am British Indian, and I was shocked I was given all these names that I had never considered before.” She was mainly taken aback by differences in treatment of racial groups, in opportunities available to an artist of color to one that’s not, especially for the South Asian diaspora who are typecast in comedic roles. “In the U.K., there are soap operas with Indian families but no stereotyping of Indian characters, no breaking out into Bollywood song.”

Keeping the lives of the characters in her play relatable garnered Bhammer excellent audience feedback. “We had members of the audience saying that they discuss the exact same issues.” She credits her success to not succumbing to stereotypical roles and characters, and for having taken the initiative to create the roles and characters that were largely absent in the mainstream for South Asians. “I shouldn’t be unable to express myself as an actor simply because nobody has written a role like that!” 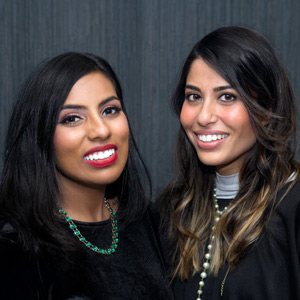 (Left) Yumna Khan and Nida Chowdhry, co-producers of the show Unfair and Ugly.

A similar train of thought motivated friends and co-producers Yumna Khan and Nida Chowdhry of Stranger Magic Productions. They wanted to establish their own company to create a digital show titled Unfair & Ugly—about a South Asian Muslim family in Orange County trying to keep it together.

Growing up in the same community in California, Khan and Chowdhry enjoyed previous opportunities working together before each going off in their own direction for a few years, exploring the media industry. Then, catching up last year about their experiences on set, particularly being a woman of color on set, and how they are treated differently in the industry, they found a common cause and platform that initiated their collaboration. Despite being on opposite coasts, they forged ahead and are seeing their efforts bear fruit.

“Unfair & Ugly was a seed planted in Nida’s brain from when she watched Arrested Development and wanted to see a South Asian version of it,” shares Khan. “It started as a dark comedy but eventually turned into a dramedy once we started developing the story in December 2016.” 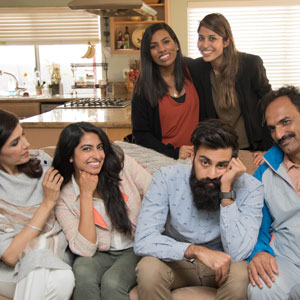 (Left) Yumna Khan and Nida Chowdhry stand behind the cast of Unfair and Ugly.

The concept trailer for the show was released in February this year and an Indiegogo crowdfunding campaign was established to raise money for production, to spread awareness, and to get the marketing and outreach mobilized. With $30,000 from those efforts, Khan and Chowdhry embarked on preproduction in June. They began shooting Season One in July, around the Orange County area, and are releasing independently on YouTube in the fall.

Their hard work is paying off with mentions on NBC News and Huffington Post even as they were fundraising for production. Sabir Pirzada of Person of Interest and an ABC 2017 Writers Fellow, and Zarqa Nawaz, creator of Little Mosque on the Prairie, shared praise on the concept. Meanwhile, the show is garnering fans along the way.

“The aim is to tell diverse stories that reflect the world as we’ve lived it, and capture the magic of everyday people around us,” says Khan. “We need more representation in the media, to shape our own narratives. Nobody else is going to tell our stories—we have to tell them ourselves.”