The poetry of Purvi Shah, Usha Akella, and Jay Deshpande is nuanced and informed by their transcultural moorings, offering a rainbow of insights into life.

I walk softly upon the earth
because your footprints could be on it,
because I could be walking spaces you have tread.

How many bodies have you dwelt in to catch my eye?
the peanut seller,
the Metro North conductor,
the cobbler on the sidewalk in James Street,
the woman who said she saw God in my face.
Each time I connect with someone is it you?

Each time I behold beauty is it you?
Have you chosen to haunt me by haunting the universe?
—“Because your footprints” from Usha Akella’s A Face that Does Not Bear the Footprints of the World, Monsoon Editions. 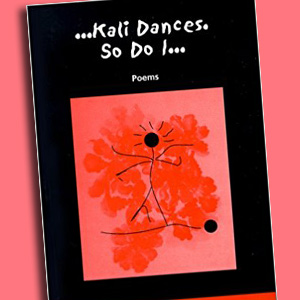 (Left) Usha Akella's book, Kali Dances, So Do I.

Usha Akella is an Indian-American poet living in Austin, Texas, who comes directly out of the sleeve of Rumi. Hyderabad-born Akella maintains that her work is the inspiration of two archetypes, the Persian Rumi and the Goddess Kali, “born,” she says, “out of a rage for justice.” Her poetic voice, modulated by all the highs and lows on the spiritual register, is as different from the voices of two other Indian-American poets, Purvi Shah and Jay Deshpande, as theirs are from each other.

Shah, though she spent only the first two years of her life in Ahmedabad before her family migrated to America, brings to her poetry a strong immigrant sensibility packaged with an equally strong feminist anchoring of her leftoriented politics. For fourteen years she was involved with the South Asian anti-domestic violence group, Sakhi, first as a volunteer, later as executive director. “My grandparents educated all four of their daughters when that was uncommon in India,” she says. “My social consciousness comes from them, my family, who came into their own during the time of colonialism, an important marker in terms of personal and global history.”

Shah writes in her “anti-exotification,” anti-colonialist poem, “The Enemy Within,” from her 2006 volume, Terrain Tracks (New Rivers Press), about being treated for insect bites by a medic, a “Georgia boy,” who says with ingratiating intent, “Asian women smell sweeter.” While it is his aim to “institute a science/out of the history of invasion,” the corporeal “landscape” she lays claim to contains “the scars of An Khe, Amritsar, or Nagasaki.” 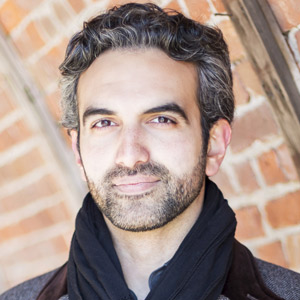 Jay Deshpande (left) is the lone American-born poet of the three. Akella’s Austin was his birthplace, but he grew up in New Hampshire. Though he regularly visited his father’s family in Bombay as a child, and ate Indian food at home, and went to see the occasional Bollywood film, he did not bond with Indian culture, and his father’s great love of Tagore did not rub off on him.

He raises the subject of his name, and what people expect from a poet with the name Deshpande. He maintains that what a reader brings in the way of generalizations about a particular ethnicity will often determine how he or she will react to a poem. In his own case that would prove tricky.

“I come from a strong Anglo-influenced family, where there was always a strong transcultural view. My father had a Western education in Bombay. He went to the Cathedral School, an English school. He was very interested in the English poetic tradition (he was especially fond of Kipling). My relationship with India has always been this third culture experience (behind American and mixed-culture experiences). I don’t think there are any hidden gems of Indian identity in my work. But maybe there would be for someone whose understanding of Indian identity is broader than mine.” 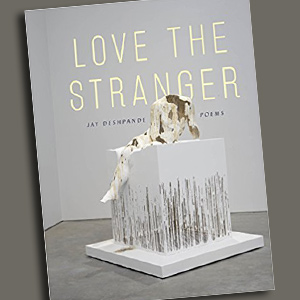 From his poem “Keeping Up,” emerges subject matter that is definitely transcultural:

On the face of each Kardashian
there is something horribly pushed around.
Each Kardashian knows that when she is alone with herself
the world is more quiet than God.
—from Deshpande’s Love the Stranger, YesYes Books

Among the many things reflected in the works of these poets is the permeable nature of the Indian experience in the world. Akella, for example, whose poetic voice descends on us from one of the oldest branches on the Indian tree, and whose natural state is contemplation, has lived an almost exhaustingly worldly life. She’s attended poetry festivals in Macedonia, Turkey, Nicaragua, visited countries as far flung as Denmark and New Zealand, married, founded Matwaala to bring together the South Asian poets in the diaspora, and founded The Poetry Caravan, which brings poetry into prisons, nursing homes, and hospitals—founded it twice actually, the first time in 2003 in White Plains, New York, then again in Austin in 2015.

“I felt it was not enough for me, as a poet, to be recognized, to get my work out there in an individual way. I realized that the role of poetry and the poet in our very consumerist, materialistic world, was to serve the people who have been forgotten by this culture, mistreated by it.”

Caravan is an apt name for almost any project undertaken by Akella. In her introduction to The Rosary of Latitudes (Transcendent Zero Press), one of her four published books, she writes:

“A place is the expanding latitude of the heart. A place is movement, evolution, and growth. A place is suspension; those mid-air transits to and fro across the Atlantic. A place is home, identity, homelessness, the journey toward the self; outer to inner; inner to outer.”

Purvi Shah (above) and her book Terrain Tracks.

Shah, who is comfortable defining herself more in universal than in Indian-American terms (“How does one know oneself? How is one known by others?”), writes love poems that bear a striking resemblance to traditional Indian love poems in their fierce and delicate mixture of nature and desire.

I wonder: what costs more, love or its expression?
Of so much I am unsure: can you sing
at night’s edge and lift a stranger’s heart?
Can you peer through thunder without drawing
the gaze of light? When you walk through mist,
can you climb over trees and see the stretch of bliss?
—“Songburst” from Terrain Tracks, New Rivers Press

Deshpande, quite unexpectedly it turned out, found that his journey to poetry writing began at the shores of Hinduism through the back door of T.S. Eliot at Harvard.

“Part of the appeal of Eliot was being able to reference so many familiar things: ‘The still point in the turning world.’ ‘Shanti, shanti.’ The Bhagavad Gita. In Four Quartets in particular I was interested in his movements towards wisdom.”

Deshpande’s poems may not include memories of eating Parle-G biscuits in Bombay as a boy, or shopping for chappals, but when he reflects on his childhood India as “a set of compartmentalized rooms and moments,” he brings to mind the strangely compartmentalized work lives of Indian-American writers like himself. Poet and novelist Amit Majmudar works as a radiologist by day. Akhil Sharma, author of the internationally acclaimed novel Family Life, worked in finance. Deshpande wrote for the magazine Watch Time specializing in luxury wristwatches. It’s hard to imagine the man who wrote the line “Laughter whinges in the saplings” writing an article titled “Gucci Takes the Plunge into High Horology with New Gucci Dive Watch.”

All three poets share the anarchic gift of reinvention that America offers its artists, whether they are rooted in traditional cultures like India or transplanted Western cultures. Akella, who was already 26 when she came with her husband to live in America, has seen her existential moorings shape-shift since her physical departure from India. In her introduction to Latitudes, she writes, “The reality of my generation has been immigration, displacement, and the growing arc of comfort with it.”

In her case that meant grappling with eternal truths among the unreliable, beautiful, yet ever more contentious topography of the turning world. She writes of her “existential angst” when a man in the Lakeline Mall in Austin once picked a fight with her and told her to go back to her country.

Her subversive, alliterative, accumulative rendering of American consumerism is tonally more compatible with Beat poet Allen Ginsberg than with Rumi:

Deshpande for his part has made of his attenuated Indianness an innovative, uniquely American literary vessel whose verbal floorboards are often fragmented, emotionally-stranded, and multidirectional. “Having a mixed identity means there are parts of my identity I am not fully in touch with. I think there is a real need to study the self, to look at the self for what might be inside that’s not fully understood.”

He writes in “Dream of Disconsolate Strangers” (from Love the Stranger)​,

In the dream you were etching something and it was
to be, later, me. And so we go on.
Water, moving, makes its own hollow.

Purvi Shah, like many socially conscious, welleducated Indian women, could easily have wound up working with victims of domestic violence back home had her parents not emigrated. But then she would not have been reborn in the intoxicating waters of American multiculturalism.

In 2015, Shah partnered with libraries in three Iowa towns—Grinnell, Marshalltown, and Cedar Falls—to have her poems, created out of what she heard and observed in Iowa, placed on vinyl on library windows. Akella was similarly compelled to find an American idiom for the American phenomena she sets down with such delicious ambivalence. Deshpande selects as his American icon of choice, Jack Palance, because, in part, “his name is such a great cowboy name.”

After all these years in America, how wonderful it seems to be able to approach America with the creative innocence of a newcomer.

Robert Hirschfield’s poems have appeared in Salamander, Pamplemousse, Offcourse, and Tablet, among other publications, and his reviews of poetry collections were published in Sojourners and The Jerusalem Report.