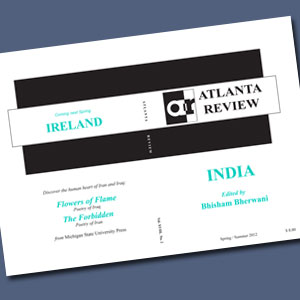 In the Atlanta Review’s Spring 2012 issue anthologizing contemporary Indian poetry in English and in English translation, we find an ironic wisdom poem by A. K. Ramanujan that may or may not reflect his many years of U.S. residency.

Titled “Love 4: what he said to his daughter,” it begins like this:


I love him, she said
at eighteen.
But he’s seventy,
I said, forgetting
At sixty three
that all the women
I’ve ever loved
have stayed eighteen

The twenty-one Indian poets were assembled for the Review by Bhisham Bherwani, a New York poet from Mumbai. The selection highlights some of the most prominent fi gures of English language poetry in India, which came into its own in the fifties: Ramanujan, Nissim Ezekiel, Dom Moraes, Adil Jussawalla. It also includes younger poets like Goan Jerry Pinto and the Indian-Tibetan and Tibetan activist, Tenzin Tsundue.

The anthology quietly points to the diversity of Indian poetry. Pinto is a Catholic, Tsundue a Buddhist, Ezekiel was a Jew, and the elderly Gieve Patel, a Parsi. The Patel poem, “The Ambiguous Fate of Gieve Patel, He Being neither Muslim nor Hindu in India,” declares: “To be no part of this hate is deprivation.”

In his introduction to the anthology, Bherwani concedes that “its attempt to distill several decades of poetry and embrace a variety of voices is, needless to say, by no stretch of the imagination comprehensive.” Being an English language anthology, it of course sidelines poetry in Gujarati, Hindi, Marathi, and all the other Indian languages save for what translations accomplish.

The inclusion of a translated poem by the great Kabir is an arrow that shoots back to the ancient spiritual vein in Indian poetry, to an India that resonated with the sixties culture in America, and their romanticized notions of Indian holiness.


While you are busy perfuming
Your body with sandal oil,
Someone else is chopping


The wood for your funeral.

We find echoes of Kabir’s instructional verse on Maya in the poem “Approaching Fifty,” by the acclaimed Lahore-born poet, Arvind Krishna Mehrotra.


Sometimes,
In unwiped bathroom mirrors,
He sees all three faces
Looking at him.
His own,
The gray-haired man’s
Whose life policy has matured,
And the mocking youth’s


Who paid the first premium.

Like Mehrotra, the Marathi poet Arun Kolatkar is spiritually raw, down to earth. In his poem, “Heart of Ruin,” from his acclaimed volume Jejuri, he describes a Hanuman temple as a wreck with a collapsed roof, a broken collection box, the domicile of a mongrel and her puppies, and a dung beetle. Still, he concludes, the place is nothing less than a house of God.

But predominantly, the poets anthologized here, like modern poets almost anywhere, are concerned with mortality, sexuality, politics, and the conspiracies of internal displacements that define a human life.

Eunice de Souza contemplates abandoning her mother in her old age, and finding herself in old age, abandoned. Nissim Ezekiel remembers his season of persecution as a Jewish student in a Catholic school. Keki N. Daruwalla extends solidarity to a Palestinian poet, and ends with a call for peace:


I pray that they never drive your children into the desert


and may your children never drive them into the sea.

The poems range in structure from the free verse of Daruwalla to the metrically formed works of Ezekiel and Moraes. The first four lines of Moraes’s “Kanheri Caves” feature rhymes and half rhymes at line endings and in mid-line.


Over these blunted, these tormented hills,
Hawks hail and wheel, glissading down the sky:
It seems this green ambiguous landscape tilts


And teeters the perspective of the eye.

Bherwani’s anthology is another reminder of how Indian writers have broadened the landscape of English literature just as they have been influenced by it. (Reading Jussawalla’s “Land End,” it is impossible not to think of America’s great confessional poet Robert Lowell.) One wishes the Indian poets the same embrace American readers have lavished on India’s English language novelists.