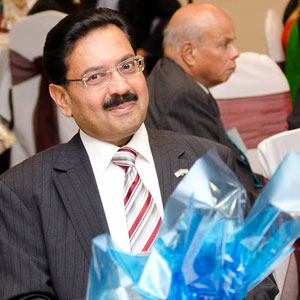 The Honorable Ajit Kumar spoke to Khabar about the launch of the Atlanta consulate, his perspectives from a long and distinguished diplomatic career, and about reversing the bad vibes associated with the consulate office previously servicing the region.


“Gracious,” “friendly,” and “accessible” are a few descriptions that many in the Atlanta Indian community have used for the newly appointed Consul General Ajit Kumar. Community watchers have been impressed with his engagement, evident in the fact that he has been present in most recent community events, interacting extensively with officials and the guests alike.

Atlanta Indians have been giddy at the prospect of having their own consulate office—ever since it was first pledged in September 2008 by the Indian government. From that perspective, the consul general comes into a community that is shouting “Hurray” and welcoming him enthusiastically with open arms.

But what also makes his job formidable is the fact that many of his constituents have been “burnt,” so to speak, by their interactions with the Indian consulate that previously held jurisdiction in this region. In much of 2009 and 2010 Khabar and other Indian media as well as community leaders and immigration attorneys were approached by numerous applicants complaining about the extreme delays, lack of communication, and frustrating inaccessibility at the Consulate General of India in Houston, Texas.

Will Kumar be able to restore our faith in the Indian consulate? First impressions, along with his distinguished record as a diplomat of considerable experience (please see “Career Highlights”) give ample reason for  optimism. Dr. Jagdish Sheth of Emory University, who is well known in the community and an internationally acclaimed marketing guru and futurist, probably speaks for many when he says, “I am very impressed with Ajit Kumar. He is very personable and easy to approach. I think he will do his best to assist both the Indian and non-Indian communities. I am glad we have a consulate in Atlanta and a very good first consul general.”

What are your objectives and goals in your role as consul general in Atlanta?


As the first Consul General of India in Atlanta, it is my aim to improve the bilateral relations in all its aspects, especially with the eight states of USA that would be under our jurisdiction. We will also be safeguarding the interests of Indian citizens as well as engaging with the Indian-American community for their consular needs like issuing visas, passports, OCI, PIO cards and other services. Honorable Prime Minister of India in his address to Indian Diaspora in 2008 had also mentioned that the security and welfare of Indian residents living abroad is a top priority of India’s diplomatic missions. We will sincerely follow this directive.

Through serving Indian constituents in various parts of the world, what have you learnt about the defining characteristics of Indians? Are Indian diasporic communities vastly different in character or are they fundamentally similar?


The Indian diaspora is fundamentally similar in that they are intelligent and hardworking and are well respected. But they differ, too, because the countries they live in are different in terms of history and culture and they have to adapt to that. Hats off to them for adjusting in regions as diverse as the [Persian] Gulf and Germany.

How might the Indian community in America differ from the one in South Africa, for example?


There is a difference in the historical context. Many Indian South Africans like Monty Naicker and Yusuf Dadoo were key players in the movement against Apartheid and helped Nelson Mandela and the African National Congress. Here it’s different. In the 21st century the Indian-American community has come of age. There are professionals, entrepreneurs, and people working so hard to make a difference… they’re trying to integrate with the local society. Wherever they are, the Indian diaspora is excelling. It’s a matter of pride. They’ve made it easier for us, helping us to influence congressmen and senators in the U.S. In that respect, the Indian-Americans have been pioneers and instrumental in forging closer links between India and the U.S. It’s true of the Indian diaspora in general everywhere, but the Indian-American community stands out as an example.

How will you improve Indo-US engagements specifically for Atlanta/Georgia?
Since India’s bilateral engagement with USA has significantly strengthened and expanded, there is a large number of mechanisms for engagement that cover virtually every field of human endeavor. In this respect, I
would like more people from Georgia and other states to visit India and to improve economic, commercial, scientific, educational and cultural relations between Georgia and India. There is potential for expansion


of bilateral relations in the above-mentioned areas. For example, there was a 40-percent increase in India’s trade of over $1 billion to Georgia in 2010. Similarly, Georgia’s exports to India were worth over $562 million, which was a 35-percent increase over 2009. I would like to see more Georgian companies operating in India and more Indian companies operating in Georgia. There are already 40 Indian companies operating in Georgia. We would support trade and investment by interacting with Chambers of Commerce. We will organize business meets regularly to engage with the business community. There is already an “India’s  Supply Chain: Markets and Opportunities” conference scheduled on January 23, 2012, being organized with the Georgia Department of Economic Development. The U.S.-India Summit has been planned for June this year. Last year, this summit was inaugurated by Governor Nathan Deal. In my call on the governor, I have requested him to inaugurate this year’s summit also, subject to his convenience. We will be also encouraging a regular exchange of business delegations between Georgia and India. Similarly, in the academic field, we would like to encourage more student exchanges between universities and schools. Over 100,000 students study in the USA. Several U.S.and Indian universities are also working on collaborations. Emory University in Atlanta is again hosting “India Summit” in March 2012. We encourage the participation in such positive initiatives to bring India and US universities closer.

How will you ensure the Atlanta Consulate will not have problems similar to those the Houston Consulate faced? Do you have the support and resources from the Ministry of External Affairs to avoid such a sad state of affairs?
Our effort would be to engage and serve the community to the best of our ability. In Frankfurt we issued about 55,000 visas, most of them in a day [turnaround]. Here the pressure of numbers would be much more. But we will systematize our work and resolve the problems that the community has faced. We have the full support of our headquarters. The Minister of External Affairs, Shri S. M. Krishna, took a meeting of the Ambassador and all Indian consul generals in USA on September 24, 2011, in New York and directed us to serve the community better and closely engage with them. Our Ambassador, Her Excellency Mrs. Nirupama Rao, has also directed all consul generals to closely engage with the Indian-American community and offer better consular services. I will do my best to serve the community within the resources provided by our Ministry.

What is the relationship of your office with the Honorary Consul office of Mr. Kenneth Cutshaw? Are you aware that his website (www.indiaconsul.com) is the first one that comes up in a Google search for “Atlanta Indian Consulate”?

We would like to thank Mr. Kenneth Cutshaw, the former Honorary Consul in Atlanta, for his services. With the opening of the Indian Consulate in Atlanta, Mr. Cutshaw is no longer the Honorary Consul of India. We are in the process of establishing an official website of the Consulate General of India in Atlanta. I will request him to close his website.

Many feel that the proposed Overseas Indian card—to replace the OCI (Overseas Citizen of India) card—adds another layer of confusion in an already muddled set of shifting options for NRIs.


You must understand that these are policy frameworks made by the Government of India. It is an evolutionary process. The PIO (Person of Indian Origin) card was first introduced so people don’t have to go through the visa process [frequently]. Then came the OCI card, which gave you a lifetime visa-free entry to India unlike the PIO card that gave you 15 years of visa-free entry. You could also open a bank account and invest and do other business transactions except for buying agricultural land. The idea is to make life easier for the Indian diaspora. So at the Pravasi Bharatiya Divas that was held in early January in Jaipur, the Prime Minister proposed a merger of the PIO and OCI cards so that we have one card. We have to streamline that. The idea is not to cause confusion. We wish we could have explained it better, but the idea is to facilitate  Indians in entering the country and in their cultural and investment engagements. That’s why we hold the Pravasi Bharatiya Divas every year from January 9 to 11 to commemorate the time Mahatma Gandhi  returned to India from South Africa in 1915.

Your personality defies the stereotype people hold of diplomats as personable but evasive and perfunctory. You seem warm and accessible. How do you think this has helped or hurt your professional performance as a diplomat where you are often required to work amongst mutually competitive parties?

Thank you for your kind words. I am a professional diplomat and try my best to do my job. I think it is necessary to interact with all people as then only you can learn about them and learn from them in order to perform better in the duties assigned to us. As individuals, diplomats may have different styles but all of us have the same goals. In the last few months that I’ve been here I’ve tried to meet with every organization, attend functions, meet and understand people. I must say the people have been very positive and helpful, coming forward to assist and guide me in many ways. I’m very grateful. I look forward to working here and offering better service when we open in a few months.

• Obtained a master’s in history from St. Stephen’s College, Delhi University.
• Joined the Indian Foreign Service in 1979.
• Has served in Indian embassies in Syria and Mexico.
• Held a post with the Indian High Commission in Islamabad, Pakistan.
• Served as deputy leader of the Indian delegation to the Conference on Disarmament (CD) in Geneva (1993 to 1996).
Participated in the multilateral negotiations on the Comprehensive Nuclear Test Ban Treaty (CTBT).
Served as Coordinator of the Group of 21 NAM (Non Aligned Movement) countries in the CD
during the CTBT negotiations
• Served as Director and Joint Secretary in Disarmament and International Security Affairs (DISA) Division in the Ministry of External Affairs, New Delhi (1996 to 2000).
• Presented papers in several national and international seminars and conferences, and contributed articles on disarmament and international security issues.
• Consul General of India in Durban, South Africa (2000 to 2003).
• Ambassador of India to the Republic of Zimbabwe (2004 to 2007).
• Consul General of India in Frankfurt, Germany (2007 to 2011).

When will the CGI-Atlanta office be ready to do business in terms of processing consular applications?
When it moves into a permanent office later in the year. Till then applications must continue to be sent to
the Houston Consulate.

Besides Georgia, which states will CGI-Atlanta serve?
At present, CGI-Atlanta is only accredited to Georgia. After formal opening of the Consulate, it would be
accredited to seven other U.S. states and territories: Alabama, Florida, South Carolina, Tennessee, Mississippi, Puerto Rico and the Virgin Islands.

As with other CGI offices in the U.S., will applications be outsourced to a professional agency?
Some consular services such as visa and passport will be outsourced.