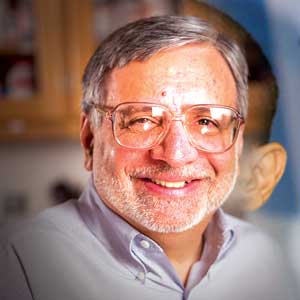 In 1995, when Emory University leaders made a recruitment call to Los Angeles, they probably didn’t realize they were making one of their smartest decisions. Looking for a person to kick-start their Vaccine Center, they called upon Dr. Rafi Ahmed, a sharp and promising researcher from UCLA (the University of California, Los Angeles). Dr. Ahmed not only launched the Emory Vaccine Center (EVC) but has nurtured it into a research giant that has received over 250 million dollars in research funding during the past 15 years.

C. Michael Cassidy, President of the Georgia Research Alliance, which played a large part in the recruitment of Dr. Ahmed says, “He is a pre-eminent scientist whose work has shaped the thinking about immune memory. He is a visionary who has created and built one of the world’s leading academic vaccine research centers. And a humanitarian, constantly seeking to turn research into applications to prevent and cure both infectious and non-infectious diseases. Georgia is truly fortunate that he chose to come here.”

From Osmania University, Hyderabad to Pocatello, Idaho (Idaho State University)—then, from Harvard to Los Angeles to Atlanta, Dr. Ahmed’s journey has been stellar statement about pursuing one’s work with the kind of passion that takes you all the way.

As he points out to Khabar, his arrival at Emory was a major turning point. “It was risky but I went with my intuition,” says Dr. Ahmed. “And it proved to be a great decision. I guess I was also lucky.”

Luck is something Emory might also cite, but not without highlighting the fact that in 1994, while still at UCLA, Dr. Ahmed had published a landmark paper in Nature that changed the existing outlook on immunological memory. Before that paper got published, people hardly knew who I was,” notes Dr. Ahmed. “From a virologist, it transformed me into an immunologist.”

The paper not only changed Dr. Ahmed’s life, it altered the thought processes of key researchers who began to understand our immune system better, and worked towards better vaccine strategies. Then, further seminal papers were published, more discoveries made, and in the years that followed, Dr. Ahmed and the Emory Vaccine Center took enormous steps in the right direction.

As a prestigious member of India’s SAC-O (Standing Advisory Committee – Overseas), which advises the Department of Biotechnology Secretary who then reports to the Minister of Science, Dr. Ahmed had begun to interact with the Government of India. “In the past decade, the Indian government has been very supportive of local research,” says Dr. Ahmed. For an enthusiastic student of science who came to the U.S. in the seventies but always wanted to do something for his country, one good relationship led to another. Then came a long awaited opportunity, something he gladly embraced.

It came in the form of a partnership with India-based International Centre for Genetic Engineering and Biotechnology (ICGEB). The mission of the center fit well with what Dr. Ahmed and EVC had planned for: to provide a scientific and educational environment of the highest standard and conduct innovative research in life sciences for the benefit of developing countries. The key was that CGEB had a center in Delhi, which made it an ideal candidate for EVC to initiate an alliance. ICGEB was excited about the prospect of working with a respected organization led by an eminent researcher who had inseparable ties to India, especially with looming questions to address in areas like HIV and malaria. Meanwhile, this allowed EVC to establish a global presence, something important to Emory and the National Institutes of Health, which provide substantial financial support.

In January of 2008, the ICGEB-EVC alliance became official, with blessings from Emory Global Health Institute and Shri Kapil Sibal (former Minister of Science and Technology in the Manmohan Singh Cabinet). This initiative was admirable in many respects. For example, it encouraged quality research in India that would be aided by U.S. grants applied for jointly by researchers from both Emory and Delhi. “It moves away from the traditional idea of getting patient samples shipped from developing countries to do research here,” says Dr. Ahmed. “Now, we bring quality minds and bolster projects in India.”

When asked about reaching a pinnacle in this partnership, Dr. Ahmed modestly shakes his head. “Right now, these are early steps. We want to publish path-breaking science from Indian labs,” he says, “which might not happen next year, might not happen in five years, but we’ve planted the seeds.”

Planting the seeds of success is what Dr. Ahmed has always been doing. In fact, the sense of pride is palpable in his voice when he talks about the twenty-odd postdoctoral students he has mentored, almost all of whom have grown into established scientists making names for themselves. “When you hear about top papers coming out of their labs, I feel elated,” says Dr. Ahmed, “as if I wrote them.”

Dr. Ahmed, who lives in Atlanta with his wife Lala, son Hasan, and daughter Fatima, was honored in 2009 by being elected to the prestigious National Academy of Sciences. This is one of the premier recognitions in science, conferred in acknowledgment of distinguished and continuing achievements in original research. In response to this honor for Dr. Ahmed, Thomas J. Lawley, Dean of Emory’s School of Medicine said, “We are enormously proud of Dr. Ahmed. His work has provided crucial information for the development of vaccines for HIV and other infectious agents, and he has been a key force in increasing Emory’s national leadership in biomedical research.”

Dr. Lawley was referring, in addition to scores of groundbreaking discoveries, to Dr. Ahmed’s therapeutic finding in 2006 – that our fatigued and flagging immune system can be rejuvenated in the face of relentless
attacks from infectious agents. While combating an infection, our body’s defenses become drained and exhausted. Dr. Ahmed has shown that by blocking a protein called PD-1 (Programmed Death-1), such exhaustion can be reversed. Thanks to his findings, there are many therapeutic products in clinical trials, including antibodies that are being developed against PD1. The hope is that by nullifying the negative effects of PD1, we might be able to enhance our battles against invading pathogens.

In addition to being focused and industrious, Dr. Ahmed says he has remained flexible to new ideas and situations, an attribute that has allowed him to reach enviable levels in his field. In his speech, there is confidence but no arrogance. In his demeanor, there is fulfillment but also a blazing passion to achieve the next level, to uncover the unexpected.

Dr. Ahmed used to send home newspaper cuttings and photographs to his proud parents, personal souvenirs that informed them of their son’s success. In the years to come, as the impact of Dr. Ahmed’s work grows and becomes recorded in the annals of science, I will revisit my interview with this scientist. It will be my cherished souvenir.