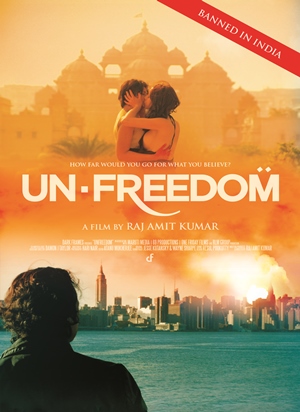 Banned in India, the controversial new motion picture ​Un-freedom was released in the United States on Friday, May 29, 2015 in theaters in New York and Los Angeles as well as on nationwide digital platforms such as iTunes.

Un-freedom is an urgent contemporary thriller about a society torn apart by political, religious, and sexual turmoil. Shifting between New York and New Delhi, the film juxtaposes two powerful and unflinching stories about religious fundamentalism and intolerance, one of which follows a Muslim terrorist attempting to silence a liberal Muslim scholar, while the other is about a young woman who defies her devout father and escapes an arranged marriage because she is secretly embroiled in a taboo lesbian romance. In this searing portrait of the polarized world we live in, all four characters go to their absolute limit—and beyond—in their struggle to defend their deeply-held and conflicting viewpoints on freedom, faith, family and love. Set in the most archetypal cities of economic and patriarchal control, strong-willed characters come face to face with horrific acts of violence in a battle of identities against “unfreedom”. The choices that these characters make when they are most cornered in life expose the complex realities of modern society.

The director makes one think. Whether one accepts or rejects part or everything in Un-Freedom, questions will continue to linger. The film’s fabric covers two “heavy” subjects: Islam in New York and intolerance toward LGBT in New Delhi. Bordering on the risqué and racy, nudity of two grown women is blatant but done with taste.

Raj Amit Kumar, a debut director, has not prescribed any solutions. His feature talks of two existing scenarios – rise of alleged Islamists in New York City with people ready to kill for a cause, and lucid articulation by the LGBT community in New Delhi with open parades, demands by the community for its rights and identity as a respected, distinct group.

One aspect of the narrative follows a terrorist, Husain (Bhanu Uday – Return to Rajapur) with Islamic leanings who attempts to silence a liberal Muslim scholar, Fareed, played by Victor Banerjee (A Passage to India), and the second story portrays Leela, played by Preeti Gupta (Mere Haule Dost) who is secretly involved in a taboo lesbian romance with Bhavani Lee (Sakenara), while her strict Indian father, a police officer, Devraj played by Adil Hussain (Life of Pi) is trying to arrange Leela’s marriage.

Gupta says of her role, “The moment I read the script it was almost as if Leela screamed out to me—she could be the girl I was passing on the road, brushing past in a movie theater, or standing next to her buying groceries … I felt her story had to be told, and I had to be part of it.” 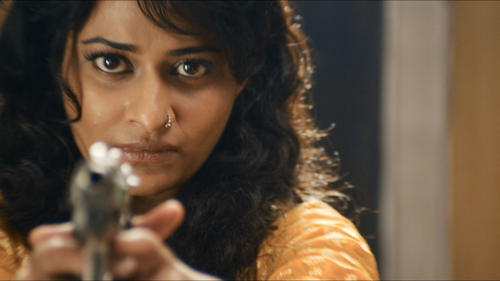 Sex and violence are vital parts of the screenplay, and it is not surprising that the Central Board of Film Certification (CBFC) in India has banned its screening in India. Chronicling of this documentary is somewhat confusing: editing requires some refining in places.

If the director has set out to document homosexual identity in India as a force and the rise of “Islamophobia” in the West, he has succeeded. He has also managed to tweak more than a passing interest in the LGBT phenomenon. He has created an awareness—a small dent if you please—in the fight for LGBT rights.

It is debatable as to which scene is more gruesome or bizarre: two women lovers being raped in a New Delhi cell under the watchful gaze of Leela’s father or the literal nailing of a young man on his palms. While a diluted, censored version of Un-Freedom will perhaps sell in India if director Kumar’s appeal to the High Court is successful, some in the West, too, could have strong objections to some of the symbolic but macabre scenes. Too much ruthless violence: an eye being mangled, fingers being chopped. 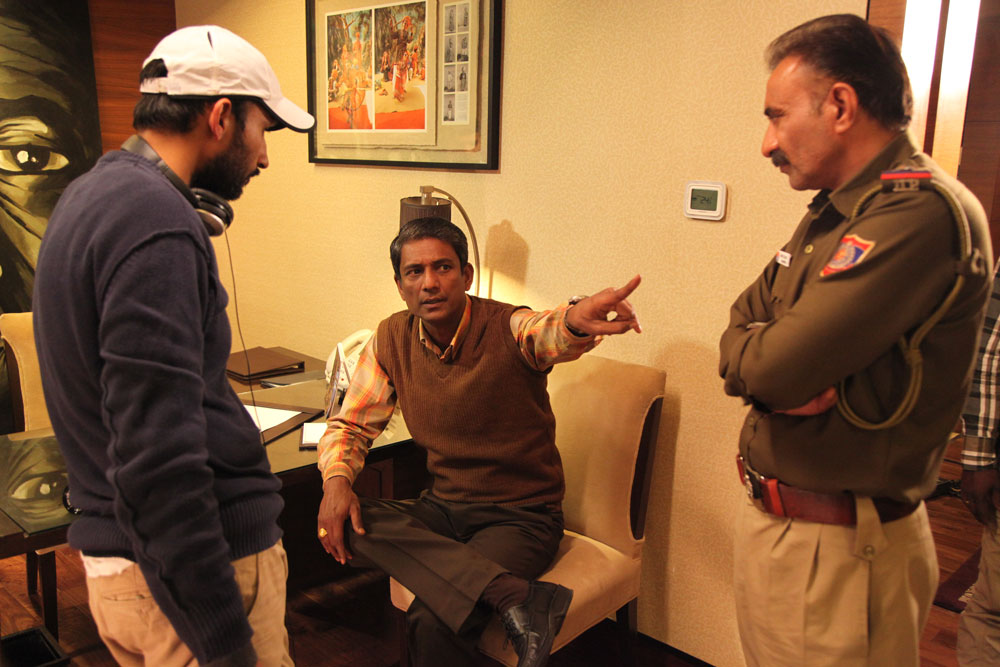 Viewers in India and in the West will have their own interpretations on the rape scene, depending on individual perspective, just as two women lolling and sprawled completely nude and performing the sexual act openly will be a literal revelation.

Over the past two decades, starting with the World Trade Center bombing in 1993 we have had The Reluctant Fundamentalist and New York—to name a couple, both from Bollywood—painting the same mosaic with New York as the central theme and Muslim clerics instigating civil disturbances. Formerly, it used to be blind sheikhs, but here, the director has made Husain harm the preacher in his left eye.

Revenge seems to be Husain’s motivation and it is never explained why he hated preachers (mullahs). He sees his father Anees (Samrat Chakrabarti – Law & Order: Criminal Intent) being brutally killed by “terrorists.”

The usual intellectual conflict continues with creative producers, film directors, camera-people, writers and academia pushing the liberal envelope as it were, on one side, and hard-headed practicality by authorities such as the CBFC in India on the other pushing back, presumably in the interest of the larger public who are not readily open to new ideas.

Too many clichés in the script: “War between the powerful and powerless,” “Gay parade and guardians of God,” “we need to get authorities out of our bedrooms,” et al. 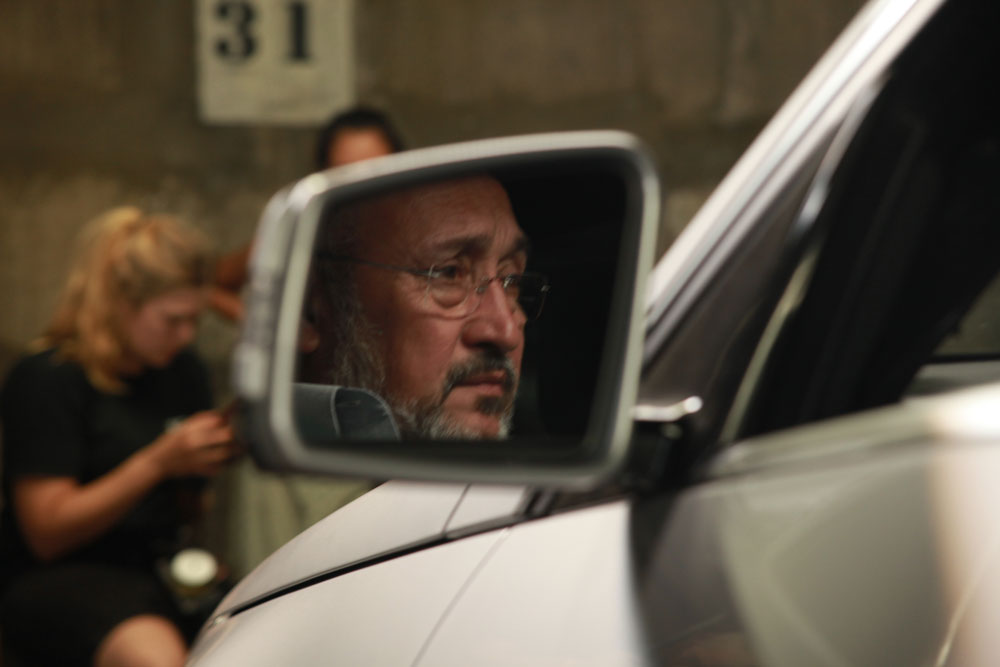 Mitch (Andrew Platner, known for Marked Man) continues to hear and follow instructions on his cell phone from Malik (Danny Boushebel, known for Homeland) and constantly follows Husain around in a sedan in New York. Looks like Mitch’s mission is merely to follow Husain all the way. He never confronts anyone.

Director Kumar says, “the nude scenes were shot from sixty miles outside of New Delhi in a rural area. The team had to transport crew, equipment, and cast in rowboats up the Ganges river to a remote sandy bank area. Security was also a problem, and the winter wind made for tough night shoots with sand everywhere.”

At some points in the film, one wonders who is the believer and who is not, and who exactly is a “sleeper cell.” Think about it.

Award-winning actor Victor Banerjee stars in this bold new film and sat down for a candid talk about his role as Fareed, a liberal Muslim scholar who actively speaks out against terrorists who use the Muslim faith as a cover for their immoral actions.

How were you first approached for this project and what made you want to take on this role?
An Assamese Director, Bidyut Kataki, whose feature film As the River Flows I had worked in, was a friend of Aftab’s, I think, and sent him my contact details. Raj then had the guts to send me his gut-wrenching script. It was the sort of script that only a fool would turn down and, as stupid as I sometimes may seem, I’m not an “unthinking” imbecile.

What was it like working with a first-time director and what did you think of the script when you first read it?
Raj hardly qualifies as a first-time director. He may be one technically, but he knew the craft well and had done his thinking and homework with amazing thoroughness and utmost sincerity. The script, in my opinion, was a masterpiece. I wasn’t the least bit surprised to learn afterwards that it had already received the most prestigious University of Film and Video Association, Faculty Screenwriting Award.

How do you feel about the film being banned in India and the censorship issues it has faced?
I’m not the least bit surprised. It’s a shocking script and I am sure the film will make sensitive stomachs turn and moralizing brains fry in their own fat. Portraying sex and violence without self-censorship is an act of courage that very few artists or writers or directors really have the forthrightness to present unashamedly. We all stand pompously on high moral ground and vociferously condemn the curbing of our freedoms of expression but very few of us ever cross the imaginary line of what will pass and what won’t, with the haughty abandonment characteristic of works like Unfreedom. Banning something is an act of cowardice perpetrated by judgmental personalities unsure of their own rights in our petty human existence. Even God banished Lucifer, but didn’t “ban” him: in our own Divine Opera, Durga and Kali subdue evil, never obliterate it. Ha! The absence of darkness makes light meaningless. Tamasoma Jyotirgamaya is our legacy of enlightenment, not moral or intellectual subjugation.

What challenges did shooting this film present that made it different from shooting your many past films?
What was painfully different was watching a director driving his producer alter ego crazy. It’s difficult wearing both hats at the same time. Poor Raj. Raj was a stubborn and exacting director and up against wacky trade unionism that I believe didn’t apply to independent film makers in America, that the producer in him was finding impossible to tackle and tolerate. But through it all, Raj kept his cool, always smiled his wry smile with charm, and gracefully extracted work from us actors and his very hard-working crew. Hari and Damon were tireless slaves who never gave up and fought for quality, and poor dear Roli whom Raj treated mercilessly so she could look after every possible and implausible and irrational need or whim of mine, are people whose morality and dedication remain permanently etched in my memory. They all stood shoulder to shoulder with Raj, through thick and thin, all the way through to the bitter and traumatic end.

What projects do you have coming up?
I just finished a short English feature made by a family of zany mathematicians who found as much money as they have brains to make a thriller noir film in 15 nights, in Faridabad, called This Will End in Murder. Tushar Raheja, a Wodehousian director, and his college roommate Mukund Sanghi, from a line of film makers and multiplex owners in Udaipur, all studying for their doctorates in mathematics, with wives and sisters teaching the subject in schools and colleges, debunked Bayes’ laws of (un)conditional probability. In the same realm of improbabilities, I’ve just last week finished working in the eminent Serbian director Goran Paskaljevic’s Hindi feature film, Dev Bhoomi, shot in the Kedar Valley of the Garhwal Himalaya.  2015 is looking like a year when theories of improbabilities will short circuit and sparkle into very "different" cinematic realities for me. Amen. So be it.