Home > Magazine > Features > Beyond News: The Delhi Gang Rape Case, Not Unique to India, and Yet an Indian Problem Indeed

Beyond News: The Delhi Gang Rape Case, Not Unique to India, and Yet an Indian Problem Indeed 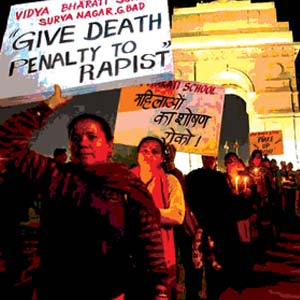 Indians may have a legitimate peeve about how some commentators around the world are portraying India as a uniquely backward country for women. But in the same breath, we are also responsible for the deplorable conditions for women in many quarters of the society.

We are sorry, but the Best Exotic Marigold Hotel is now closed indefinitely.

If there is one thing the Delhi gang rape has done it has apparently shattered the West’s Bollywood fantasies about India. “Good. About time too,” writes Libby Purves in The Times. “We in the West enjoy an image of India: industrious ambition, rising economy, color, and vigor. We romanticize it, cooing at garlands and tuk-tuks in films such as The Best Exotic Marigold Hotel.”

Wow! In the world according to Purves, the great silver lining of this appalling tragedy is that Brits can get over their Raj nostalgia because guess what, your Passage to India now comes with a travel advisory.

Purves is not alone in looking eastward in disgust. Though they come minus her crumpets-andtea- shock, The New York Times editorial is blunt: “The brutal gang rape of a young woman in New Delhi this month has cast a cold light on how badly India treats its women.”

The young woman who died could have been an exemplar of India Aspiring success story, writes Basharat Peer in The New Yorker — the village girl striving to get out of the confines of the one-bedroom flat on the back of her education, the father who sold ancestral land to finance that dream. “India prides itself on its democratic polity, on greater social mobility and freedoms than most countries in the neighborhood,” writes Peer. Instead it now has to deal with the humiliation of exposure before the world for what Reuters dubs its “rape culture.”

The gang rape in Delhi has reverberated all across the world. In trying to somehow find an explanation for both the brutality of the assault, and the explosive protest movement that came in its wake, it’s easy to somehow make this a story about some peculiar form of Indian perversity, the dark, dark truth that roils underneath those glossy Incredible India posters.

But the West should look in its own backyard before pointing fingers at India, writes Elmer O’Toole in The Guardian. If the conviction rates are appalling in India, they are just as bad in the U.S. Actually they are worse, writes O’Toole.

“In the U.S. only 24% of alleged rapes even result in an arrest, never mind a conviction.” If you are shocked by the statistic that a woman is raped in Delhi every 14 hours, “in England and Wales, which has a population about 3.5 times that of Delhi, we find a figure for recorded rapes of women that is proportionately four times larger.”

And as for all that finger-wagging about victimshaming and the stigma of rape, guess what? There’s nothing terribly Indian about that either. Owen Jones writes in The Independent about an Amnesty poll from a few years ago: The Amnesty poll found that a third of Britons believed a woman acting flirtatiously was partly or completely to blame for being raped, while over a quarter found women who were wearing revealing clothes or were drunk shared responsibility.

Even leering men are not an Indian subspecies of the sub-human. Jones points out: In a poll by End Violence Against Women this year, 41 per cent of women aged between 18 and 34 had experienced unwanted sexual attention in London. As for cops who don’t care, Faiza Khan tweets, “Reminder to Libby Purves, the 1st victim of Brit Rochdale sex trafficking ring who went to police was ignored due to her sexual history.”

But Indians who care excessively about what the West thinks of them could easily draw the wrong lesson from these comparisons: that it’s a global problem, therefore it’s not our problem—we are off the hook.

I can easily imagine that being the reaction of politicos like the Congress’ Rashid Alvi and the BJP’s Mukhtar Abbas Naqvi who found themselves unified in umbrage when the Brits issued a travel advisory after the anti-rape protests spiraled. “The whole country including Delhi, is safe,” fumed Alvi. “If one incident has happened there is no need to panic like this.” “I don’t think such advisories should be issued,” said the BJP’s Mukhtar Abbas Naqvi. “We have our own country and our own arrangements.”

Indeed. We have our own country and we had better make our own arrangements.

Not because the Best Exotic Marigold Hotel needs to reopen for business or the West needs to look at us with renewed admiration, but because as Sonia Faleiro points out in The New York Times, the unspeakable truth about what happened in Delhi is not really what happened to the young woman on December 16th. It was what happened afterwards. “She was among the very few to receive anything close to justice. She was hospitalized, her statement was recorded and within days all six of the suspected rapists were caught and, now, charged with murder. Such efficiency is unheard-of in India.”

Irrespective of what editorials in the Western newspapers think, or what their own conviction rates are, this remains our shame. Period. As Ruchir Joshi sums it up, beyond 2G-gate, Scamgate, and Coalgate, this is the deepest and most shameful scandal of them all. The failure and refusal to treat half our population as truly equal is an ongoing, murderous process in which everyone is implicated. It is called Indiagate.

When the police finally filed a charge sheet against the five adults accused in the gang rape case, according to media reports, some women lawyers shouted in the courtroom that there was no need for a trial because it was an “open and shut case” and the accused should be “handed over to the public.” They were shushed by colleagues quickly but it’s still disquieting. It’s one thing for the public to be baying for blood. It’s another matter entirely when lawyers want to do away with the legal process altogether.

Yes, temperatures are white hot. Yes, this crime was particularly brutal. Yes, there is a need for some cases to become exemplary cases.

But the answer to gang rape cannot be gang justice.

It’s not unexpected that the great festering anger over a complete lack of governance that turns something as basic as boarding a bus into a game of Russian roulette will not stay contained in candlelight vigils and silent marches. It can easily take an ugly turn. And it already has in more than one instance.

On December 22, five alleged eve teasers were beaten to death by villagers in Jharkhand’s Khuti district. “We were fed up with their misbehavior with women of the villages,” a villager told a news channel.

On January 3, a 25-year-old stalker tried to drag a 16-year-old girl towards some abandoned jute mills near Howrah in West Bengal. Alerted by her cries, some commuters came to her rescue. They thrashed the man who would have been lynched had the police not been able to somehow extricate him. By then the man was bleeding profusely from head injuries. A local resident told the TOI, “Such people should be dealt with by the public. It is no use handing them over to the police.”

On January 3, Assam Congressman Bikram Singh Brahma was thrashed and stripped by angry men and women after he was accused of raping a woman in a village in Chirang district. The villagers refused to hand him over to the police and demanded the officers record him confessing to the rape first.

And it’s not just men at the receiving end of mob justice.

On December 28, a woman was lynched by locals in Kolkata’s Topsia area. Locals suspected she was a trafficker after several young women went missing in the area. The woman was hit on the head with blunt objects and died in the hospital. “She broke down and confessed to have trafficked girls,” a local told the media.

All of this is worrying not just because mob justice is always worrying. It’s worrying also because it clearly shows people have absolutely no faith in the system of governance to deliver justice. As is clear in the Brahma case, villagers were convinced that a man with connections to the ruling party would never have to really face the consequences of his action if he was just handed over to the police. The residents in Howrah thought it no use handing the molestation suspect over to the cops.

What’s on trial in the Delhi gang rape case isn’t just the men accused of committing the crime. The government itself is on trial in how transparently and efficiently it handles the case. But as it wades through 60,000 suggestions for how to tackle violence against women, one of its biggest challenges will be restoring the citizens’ faith in the system itself.

It’s hard to find much room in one’s heart for any sympathy for rapists. But those who think a little mob justice is not so bad if it strikes fear in the heart of would-be rapists, consider what happened in Topsia not so long ago.

A few days after the woman was lynched in Topsia on suspicion of being a trafficker, another woman was walking in that area with her toddler. The toddler threw a tantrum and would not stop crying. Locals immediately surrounded the woman and started slapping her and accusing her of having stolen the child, which caused the toddler to cry even louder, feeding the mob’s frenzy even more.

This young mother was lucky. The police managed to get there in time to rescue her.

Sandip Roy is a Culture Editor for Firstpost.com, where a version of this article first appeared. Reprinted with permission.