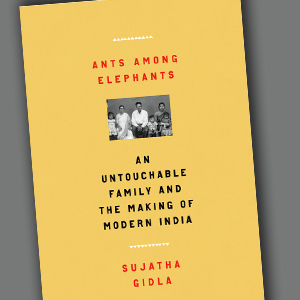 Author and engineer Sujatha Gidla, who currently works as a conductor in the New York subway, belongs to a family of Dalits from Telangana, India. In her hard-hitting and critically praised book, Gidla explores her family’s trials and tribulations in navigating postcolonial India’s turbulent landscape of caste, modernization, and class struggles.

Paki, my friends and I would call each other. “Paki! You did that?” Or, “Paki, that’s not how it’s done!” In reading Sujatha Gidla’s Ants Among Elephants: An Untouchable Family and the Making of Modern India (Farrar, Straus and Giroux), I learned that the word, with its history deeply enmeshed in caste culture—and often used as a jokey epithet by educated young people in middle-class, urban India—was the name of a community of ‘night soil workers,’ a euphemism for the lowliest of caste workers who picked up human fecal deposits from village homes and disposed them of far away. They were the Pakis. They were the “untouchables,” the Dalits.

Gidla’s family belonged to the Mala subcaste of the Dalits. Gidla’s ancestors were part of a nomadic clan of people in erstwhile Andhra Pradesh state, thriving on foraged foods, and worshiping tribal deities. When the British Raj cleared forests for tea plantations, the nomadic clan was driven to the plains and took up farming, only to be exploited by the rich landlords who taxed the families to a point where they ended up as landless laborers tilling the lands for the rich. But unlike most other Dalit families, Gidla’s family escaped the worst of their community’s fate thanks to Canadian missionaries who supported their education, and religion conversion. Her family converted to Christianity, and her parents eventually landed jobs as college lecturers.

The narrative thrust of the book revolves around her uncle and mother’s saga of navigating their respective cultural landscapes—her uncle’s passion for the working class and landless laborers of rural India, and her mother’s struggles against patriarchy. Gidla’s uncle was the famous K. G. Satyamurthy or Satyam, an activist, poet, and cofounder of the Maoist guerrilla People’s War Group. Satyam, a charismatic man spurned in his youth by a higher-caste young woman, went on to mastermind and lead several movements organizing marginalized workers, culminating in the founding of the guerrilla group. Gidla’s mother, a college educated woman with a full-time job, raised her family of three children, often living apart from her husband. Even with a middle-class job as a lecturer, Gidla’s mother struggled, moving from rental home to rental home, living in relative squalor, often involuntarily abandoning her children without adult supervision to work extra hours at the college, bravely facing the wrath of upper-caste supervisors.

Toggling between the personal histories of her family and the stories of a changing cast of characters who enter and exit her family’s lives, the book provides an up close view of Dalit life in postcolonial India. At the core of Gidla’s story is a desire to tell the story of the subaltern and the forgotten—and the convoluted class and caste structures in a country where caste meant belonging but also meant distancing, identity but also deprivation, bonding but also separation.

The stories in the book come from years of recording interviews with her uncle, her mother, and others from the villages where her extended family lived. “Compiling the material for this book has been a race against death,” Gidla writes. The narratives flowed from the memories of her mother’s aging friends and relatives, many of whom were in poor health and impoverished at the time of recording their oral histories.

“My stories, my family’s stories, were not stories in India. They were just life,” Gidla writes. Only after leaving India for the United States did Gidla realize that her family’s history and her family stories were unique in Indian history and worth telling.

Today, Gidla is the first woman conductor of Indian origin in the New York subway system. Growing up, and deeply influenced by her uncle, Gidla participated in the campus revolutionary movement, often arrested and jailed for her activities. Gidla’s narrative style is stark, at times dry, but perhaps rendered more immediate and visceral by the very nature of her unsentimental prose. The richness in the details of her uncle’s Maoist struggles may evade readers not already exposed to Indian history, and the prose can at times be dense. However, the sheer gravitas of the stories she tells carries the book through the denseness of the prose. By juxtaposing her family’s history with a young nation’s changing sociocultural and political landscape, Gidla pulls off a remarkable feat and has contributed to the literature and social history of a community whose stories do not often find a voice in mainstream discourse.

The book is a must-read for several reasons. Caste and casteist struggles have continued to shape India and academic and popular thinking about India. Even as 21st century India attempts to embrace a future that is technology-driven, urban-centered, and unfettered by caste or questions of caste, we risk walking away from opportunities to understand why we are what we are and how we got to where we are. Ants Among Elephants gives us that very opportunity.