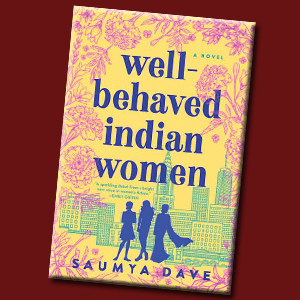 Women are often each other’s deepest and yet uneasy custodians. From being inside a cocoon to being inside walls is a short distance; shorter still if the women are intimately related to each other. Saumya Dave’s book Well-Behaved Indian Women (Berkley) draws its tension from this tightrope walk that three generations of women make—grandmother, mother, and daughter of an immigrant Gujrati family in New Jersey. Even as they look out for each other and struggle for their own identity, they also unwittingly reinforce the status quo of the past generation.

Simran, the daughter is poised for new beginnings in her life—her debut book has been launched, she is engaged to her childhood sweetheart and getting ready to marry in a year, she is also finishing grad school in psychology. However, a chance meeting with a journalist she has long admired makes her question her choices. Her mother, Nandini, has a secret of her own which she struggles with even as she continues to balance a traditional life at home with that of being an immigrant doctor where she faces racism as well as pressure from the community. Mimi, the grandmother ensconced in Gujarat and its structured even paced life has another secret of her own, as well as aspirations beyond her age and traditional set up that she lives in.

The book opens to thirty years ago where Nandini is being readied by Mimi, her mother, to meet with a prospective groom for marriage. ‘Mimi fastened a row of safety pins into Nandini’s sari. Even one slip of fabric could mean disaster’. If there was a metaphor for Dave’s book, it would be this second line. For it is in these always-on-the-horizon disasters of nonconformity to tradition and culture that life shapes up for the three generations of women in the book. The challenges are continually averted by prompt safety tucks, except that they keep coming back threatening to unravel the fabric of the known and the safe.

As the book progresses, growth happens in the realization that the known is no longer safe; in fact, is no longer known in shifting time and space. And so what started as culture and tradition that one followed out of conviction, has become subverted to a point where it is only a shell of learnt outer behavior while the core of belief and aspirations has moved ahead in pace with time. ‘Well-behaved’ in the title places the tension of outer behavior versus inner aspirations and lived experiences at the center of the book. A book that explores the process of revisiting these aspirations, following one’s heart and finding where one belongs, it also inverts the traditional wheel of knowledge flowing from older to younger generation as Simran helps Mimi find her path.

In that sense, it is both a universal theme and one that is specific to the Indian immigrant society that Dave sets her story in. A Gujarati brought up in Atlanta and now based in New York, Dave does not stray far from this known territory and her book is richer for it. Just like Dave herself, Simran is studying to be a therapist and is interested in writing. But that’s where life and fiction part ways—Dave went on to complete her studies coming back to pursue her love of writing, while Simran drops out in the last semester going on to switch to journalism.

Simran’s story is where one finds many archetypes of Indian culture, beginning with her book launch party. The nosey aunties, the parents who only care about her academics but not her book, the incessant talk about wedding, the Indian adolescence where you can’t shave legs and date boys, the hard-to-pronounce names which Dave takes a dig at as she writes, “. . . this guy’s parents have given him a name that automatically pardoned him from the cringe-worthy discomfort many kids experienced whenever a teacher called roll’. It is also where one can’t choose not to marry after engagement or drop out in grad school as Simran proceeds to do.

Dave says she wrote the book in phases, and it shows. For it is in telling the story of the mother, Nandini, that Dave’s book comes into its own: tracing the whole arc of her life through her escape from domestic abuse to a second marriage, and her roles as an immigrant wife, a doctor, a mother, and also a daughter. Dave’s exploration of small moments of revelation within her journey form the core of the book. “That was one of the many things nobody had ever told her about an arranged marriage. There was no expectation to communicate, to expose one’s emotional exoskeleton for the sake of connection.”

Neil Desai, the journalist who upended Simran’s safe world, is also one who makes writing become lyrical. For instance, “Guilt isn’t always in the form of an upset stomach or elevated pulse. Sometimes it’s the smooth texture of a truffle or as light as a drained bottle of cereal milk.”

The chemistry between Simran and Neil crackles, but that is all we come to know of Neil Desai. He appears without the cultural baggage and family background which so assails the other characters. Neil is a great foil for the traditional immigrant culture in the book but is left unexplored. Just as we hear very little of Simran’s ‘perfect’ brother. Dave gives the impression that his perfection has less to do with his abilities and more to do with being the son of the family, and it would have been interesting to see that play out in a book that explores the issues of identity within the patriarchal culture.

Warm and insightful, the strength of Dave’s book lies in the pauses that allow her characters to grow. As Simran says in the book, “I have tried. A lot. No, more than a lot. More than you realize. And I’m done.” And then elsewhere, “Some things could only come to her after she let go of her old life and embraced uncertainty, who is more like a handsome stranger she’d like to know better.”

Pooja Garg is Founder Chief Editor for The Woman Inc. (www.thewomaninc.com), an advocacy and literary magazine. She also works with Khabar magazine and Raksha, a nonprofit working for survivors of violence.