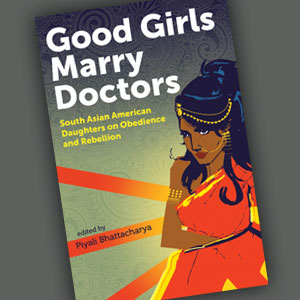 ANJALI ENJETI reviews an anthology of essays that, by including voices across cultural, ethnic, regional, and religious spectrums—Hindu, Muslim, Sikh, Parsi, Indian, Pakistani, Bangladeshi—provides us with a comprehensive understanding of the myriad pressures these talented South Asian American writers must navigate.

Good Girls Marry Doctors: South Asian American Daughters on Obedience and Rebellion (Aunt Lute Books), features 26 essays that challenge what it means to grow into successful, acceptable, rules-abiding women. It’s a topic editor Piyali Bhattacharya introduces with a rigorous critique: “No matter how much access we were given, or what our socio-economic backgrounds were, what we were often not given was the benefit of choice. We were raised to aspire to this dream, whether it fit our personal life-plan or not.”

What follows is a nuanced examination of the “dream,” and the familial tensions that arise when one generation comes of age in South Asia, and the next primarily in the United States. In Good Girls, parental expectations of marriage, procreation, devotion to religion, and the pursuit of science collide with the quest for autonomy and unconditional acceptance.

Love, and honesty about the form love takes, is a beautifully rendered theme. In the striking “Amma,” Hema Surang-Sieminski writes with aching honesty about her parents’ rejection of her for coming out as queer: “I have had to learn that I will never have the mom I want. I will never have an “Amma.”… I forget these lessons sometimes when watching other parents with their children or on Mother’s Day, or those mornings when you wake up cold or sick or overtired. Those days, I long for an Amma more than God herself.” Fawzia Mirza, also disowned for being gay in “The Day I Found Out I was a Witch,” finds a sense of freedom in leading an authentic, unapologetic life. “I am powerful in sharing my truths. I am powerful in being me.”

Several essays deconstruct gender roles in partnership and parenting. In the emotive “Becoming a Reluctant Breadwinner,” Swati Khurana struggles with missing key developmental milestones in her infant daughter’s life because, unlike her own mother, she works full time outside of the home. “The pain of not having the option to be the kind of mother I had always wanted to be (devoted, attentive, ever-present) was heartbreaking.” In “Affording the Perfect Family,” government attorney Leila Khan confesses agony over the fact that, despite possessing all the outside markers of success (marriage, motherhood, a respectable career), she longs for the financial security a doctor-spouse might have provided her as she faces staggering student loans, mortgage payments, and the cost of childcare: “The promise of that life taunts me these days, as I feel my own position in the middle class slipping.”

The rebellion depicted in Good Girls goes beyond South Asian daughter-writers—there is plenty of scandalous behavior from the more seasoned generations. In “Subterfuge: On How to Be Obedient by Rebelling,” Tara Dorabji recalls her grandmother’s scandalous divorce (which the author suspects was due to her extramarital affair), Dorabji’s parents’ divorce, and her own fractured relationship with her children’s father. “I see a pattern across our generations,” she muses, “how in our separation or divorce from the men who fathered our children—we find our voice.” In the poignant “The Photograph of My Parents,” one of the strongest essays in the collection, Neelanjana Banerjee must make peace with her philandering father who breaks up their family. “It is easy to rebel against your parents, for an ingrained generation gap and their irrational fears and strictness. But what about when your father looks you in the face over crab legs and admits to being human?” In the hilarious “My Mother, the Rebel,” Jabeen Akhtar describes her outspoken, animal rights activist mother: “When it comes to being a rebel, with my mother around, I never stood a chance. She was the rabble rouser.”

As the narratives unspool, the contributors come to realize they have always been good girls, good daughters, good mothers, good sisters, that goodness itself is in the eye of the beholder, and that a culturally derived goodness should never override one’s sense of self-worth or self-determination. Surya Kundu’s “Modern Mythologies” mirrors these sentiments most eloquently: “I choose to be independent and strong, and I choose to be my own goddess who I can worship and respect and love. Most of all, I choose my culture, not out of obligation or fear, but as it can be redefined by me.”

Anjali Enjeti is an Atlanta-based essayist, book critic, and novelist.