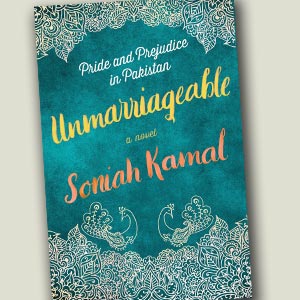 Few novels in the English language have provided more inspiration to contemporary storytellers than Jane Austen’s beloved Pride and Prejudice. It certainly inspired Atlantan Soniah Kamal. Her Unmarriageable, set in present-day Pakistan, is a delightful, searching novel with a postmodern and postcolonial sensibility.


“It is a truth universally acknowledged, that a single man in possession of a good fortune must be in want of a wife.” This famous opening line of Jane Austen’s classic, Pride and Prejudice, gets an updated spin in Soniah Kamal’s Unmarriageable (Ballantine Books), a retelling of the beloved novel in a contemporary Pakistani setting. 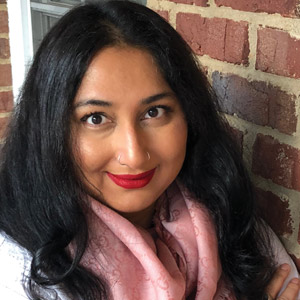 As the novel opens, Alysba Binat (sounds quite similar to Elizabeth Bennett, doesn’t it?) is trying her best to struggle against societal norms which dictate that young girls should marry a good catch as early as they can or risk being social outcasts. Alys invites her high school charges to complete the classic opening sentence of Austen’s novel, but the decidedly mixed reactions to the exercise show that Alys has her work cut out for her.

It’s not just school that is a struggle for the 33-year-old Alys. At home, she is the oldest of five sisters (in yet another nod to P and P), trying to avoid endless nagging from Mom about marriage, while keeping the family afloat on meager earnings from herself and her sister, Jena. Dad, “Bark” Binat, is little more than moral support, ducking into the garden to avoid the slightest hint of confrontation between the women in the house.

Eons ago, the Binats were society royalty, but a family feud has pushed them several rungs down the ladder. In addition, rumors about less than stellar character abound about Pinkie Binat, the mother of the five Binat girls, which doesn’t help matters, either. Despite such turns of fate—or perhaps because of them—the matriarch is especially keen on getting her daughters married to a “rich roti,” a meal ticket who can deliver a better quality of life. When an invitation to a high-society wedding presents itself, the Binats launch into overdrive to snag a suitable man, any suitable man. The stage is set for Alysba to meet her Mr. Darcy, or in this case, a handsome suitor named Valentine Darsee. Austenites (or even those who have not read Pride and Prejudice) will understand that the angry sparks that initially fly between Alys and Val are nothing but mere fodder for a more slow-burning romance.

Alys squarely bears the burden of challenging the hypocrisy of traditional Cinderella-like stories, no matter where they are set and how they play out. In the end, the man is always the gold standard and the woman must submit to him, she points out. All the while, Alys also questions the role of empire: “Can any amount of good ever merit the interference of empire? Do we never speak English again? Not read the literature? Erasing history is not the answer, so how does a country put the lasting effects of empire in proper context?” Alys asks. All good questions, the answers for which might be beyond the scope of a lighthearted novel such as this one.

At times many of the characters, especially the mother, Pinkie, and the younger sisters, Mari, Qitty, and Lady, are at risk of becoming one-dimensional caricatures, so razor-sharp is their focus on finding a suitable husband. Kamal rescues them from falling over the edge with a good dose of hilarity and plenty of good-natured, Bollywood-style drama.

Through Alys, Kamal takes a stab at questioning societal norms, but the institution of marriage itself remains secure as it did in Austen’s time. Pride and Prejudice fans will find much to love in Unmarriageable, a faithful nod to the original. There is enough color and spice in this new version, however, to make the adaptation Kamal’s own.

Unmarriageable is a fun peek at high society in Pakistan—into the social classes that divide us all and the ways in which we manage to navigate such divides. Add in a hefty dose of romance, plenty of delicious food, over-the-top parties, and a fair number of theatrical hijinks, and you’ve got the perfect recipe for an engaging Valentine’s Day read.