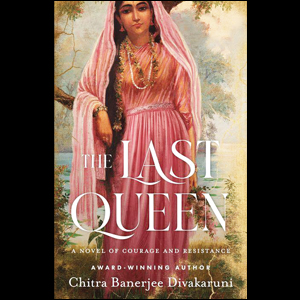 She was the Sikh empire’s last queen, reigning as regent before her son could ascend the throne. Despite interferences from a jealous queen, meddlesome advisors, a treacherous love interest and bungling relatives, she weaves her way up to the state’s premier position, ruling as one of the kingdom’s most trusted leaders. By today’s standards, Rani Jindan Kaur’s self-sufficiency, decisiveness and tact in handling conflict would inspire those who strive to navigate and balance workplace politics and domestic affairs with the same efficacy and poise.

Her courageous tale is brought to life in Chitra Banerjee Divakaruni’s The Last Queen (HarperCollins), a fictional retelling of the life of Jind Kaur (“Jindan”), youngest and last queen to Maharaja Ranjit Singh of Punjab. From her beginnings as a starving beggar in Gujranwala to her final days as a guest of Queen Victoria in England, Jindan’s unrelenting loyalty to her family, country and faith are what give her the confidence to pursue an unwritten destiny.

The story starts with the demise of the Maharaja, jogging Jindan’s memory of her youth, before she met the king. Jindan’s childhood is replete with images of deprivation: she and her brother steal from neighbors since Jindan’s careless father sends only a pittance back home from his post in Lahore; she thirsts for knowledge after dropping out of school at age 15 because of bullying.

Her father finally takes her to Lahore, hoping to entice the Maharaja to keep her as a concubine. But Jindan’s ambitions are set higher: after going horseback riding with the king and hearing tales of his adventures, she falls in love, and brazenly professes her love to him before she can be married off to a less promising suitor. This is hardly the only time we see her in her element when taking the reins.

Given the haste, we wonder if she has truly fallen for the king or is merely drawn to his glamorous lifestyle. As Divakaruni notes, that the Maharaja is not particularly handsome, but a man “whose attraction lies in the power he carries so naturally.” It’s clear that her starved youth has primed her for seizing opportunities that she feels she is owed in adulthood. Her boldness is rewarded—the King promises to marry her when she comes of age.

Once Jindan becomes queen, she gives birth to a son, Dalip. Though he’s still several degrees away from ascending the throne, he is prophesied to lose all that is dear to him, including his family and spiritual direction. Fearing for her son, Jindan spends the rest of her years taking any steps necessary to secure his future. The empire encounters a series of takeovers, each leading to violent bloodshed while removing obstacles in Dalip’s path to the throne. To win the hearts of her people, Jindan leverages a network of confidants and her image as a loyal widow: “I wear my usual white . . . I’ve created a persona. In the bazaars people whisper in awe about the young queen in white, faithful, beautiful, and tragic.”

Divakaruni’s story tracks closely to real-life events and personalities. She moves swiftly through the years to keep us turning the pages. Where readers savor in her storytelling is in following its main character’s arc: the very queen who at first shudders at the thought of brushing hands with a murderous wazir is the same one who, as an act of revenge, insolently drives the Khalsa army to take on a suicide mission against British forces later. We also witness the resourcefulness and persistence of a mother who is separated from her son, eager to reconnect with him and return him to his rightful place.

Divakaruni reveals that imposter syndrome has no place along the path to fulfilling one’s birthright. Not once do we see the young queen question her skill or right to have a seat at the royal table Instead, we see how our potential can be reached when we are vocal and take charge. The Last Queen is a testament to the heights that a woman can reach if only she’s brave enough to take reins to chase and defend what she feels she is naturally due.


Amritha Alladi Joseph, a former reporter for Gannett newspapers, The Hindu, The Gainesville Sun, Gainesville Magazine and CNN-IBN, is now a consulting manager at EY and lives in Sandy Springs, Georgia, with her husband and two children.