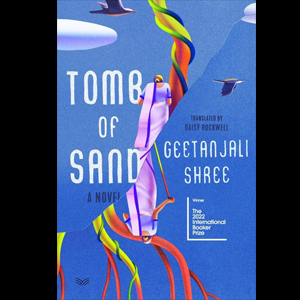 Geetanjali Shree’s pathbreaking novel, Tomb of Sand, translated from Hindi into English by Daisy Rockwell, won the 2022 International Booker Prize. While the U.S. edition is not out yet, the novel has already received wide attention and praise. DR. RACHNA SINGH reviews it.

A novel that ebbs and flows like waves lapping a sandy beach. The story of an 80-year-old woman, who has lost her husband and has taken to bed in a state of depressive stupor, eddies around the reader’s consciousness without intruding. The reader feels its desultory movement, its wetness, but is not drawn into it at the beginning. The author’s omniscient statements—“once you have got women and a border, a story can write itself” or “women are stories in themselves” or “the tale has no need for a single stream”— and a soliloquy about seasonal fruits, like jamuns in saawan bhaddo or mangoes in grisham, create a sense of detachment, a sense that the reader is a spectator watching the action unfurl on a distant stage.

But slowly and steadily, Dadi, aided by a colorful cane which she calls her “wishing tree,” her kalpataru, transitions from a squirming heap under the bed-clothes to a woman who transcends all borders, physically and metaphorically. This transition of the main protagonist triggers a change in the perspective of the reader who transitions from being a distant viewer to a participant as the tale unravels, one seam at a time.

The story is structured around two women—Dadi or Ma, the octogenarian matriarch, and Beti, her progressive daughter. Other female characters like the transgender Rosie Bua or Bahu come and go as do the male characters Bade or Sid or KK. But more than a story about these characters, it is the story of borders that takes center stage. A border is not just symbolic of human boundaries but seems almost animate and human, like the door of Dadi’s house or the window she often “leaped through.” It’s the window of laughter and unfettered freedom. In the initial pages of the novel, the writer expounds upon the nature of the border, which “opens out” and “does not enclose” or “tear apart,” or is the horizon where two worlds meet and embrace. The entire story is then woven to prove this postulate, as it were.

So, Dadi begins to “dream new dreams,” transcends the borders of depression and old age, swaps roles and becomes a “beti” to her Beti. “Am I me or have I become Ma?” wonders the Beti in confusion. Crossing over the geographical border of Wagah without a visa is another facet of the “border” character, fleshed out with great care by the writer. Dadi tells Ali Anwar, “I never left here.” And finally, when a deadly bullet finds her, Dadi does not grovel in the dead earth but lies elegantly on her back, her face turned upwards to the coverlet of a blue sky, watching a horizon where two universes meet across a divide.

One thing that really stands out in this book is the lyrical quality of the language. The language has a poetic quality and a musical ambience. Bits of poems and songs—“kahe karat ho maan” or “ja ja Kaaga”—add to the poetic cadence. Irreverent references like “is your coughing deep-mandra” or “slow and drawn-out vilambit” add to the unstructured framework of the language, raising the book above the stultifying and fettering framework of a traditional novel. Hats off to Daisy Rockwell’s translation, which maintains the essence of the language of the original. Not once does the reader feel that it is a translation. In fact, the language of the book reflects the language of contemporary Indian-English interspersed with Hindi.

Some critics claim that the book is “politically correct” (whatever that means). Perhaps it is their skimming-the-surface response to the homily about how borders don’t tear apart. But the book is much more than a story about physical borders. It is a saga of the divide between tradition and modernity, between the ever-changing roles of human beings, between madness and ingenuity, between genders, between hard core feminism and progressiveness. The book gently laps at the consciousness of readers and then obstinately draws them into the deep end, finally leaving them adrift, yet buoyed by the unusual images of borders and divides. As the novel ends, the border becomes an archetype for forces that are divisive but also embracing and unifying, forces that are mainly exemplified in the figures of Dadi and Beti.

Reprinted with the permission of Dr. Rachna Singh, editor of The Wise Owl, a literary e-magazine where this review originally appeared.