Books: No Country for Single Men 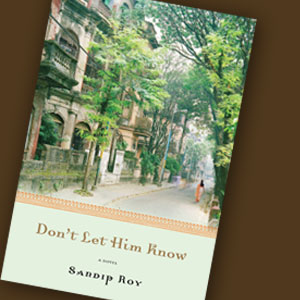 Sandip Roy’s debut novel, Don’t Let Him Know, published by Bloomsbury, is a winning meditation on identity, class, and finding grace in every day’s lived moments. Roy talks to POORNIMA APTE about his early experiences in the US, his move back to India, his untypical career choices, and attitudinal changes in India towards homosexuality, among other topics.

Most Indians will be familiar with the very specific usage of the term “adjust” in the subcontinent. This is exactly what Avinash and Romola Mitra have learned to do—they bury past relationships and their true identities (Avinash is gay) and adjust, settling into a stable marriage that is comfortable despite its lack of fireworks. Their only son, Amit Mitra, is a computer engineer in San Francisco, with a family and life of his own.

Through a series of vignettes that move back and forth in time, journalist and debut novelist Sandip Roy brilliantly captures the Mitras’ suppressed desires and their everyday anxieties. Don’t Let Him Know is proof that one doesn’t need pyrotechnics to shine light on the human condition; it is often what is left unsaid that speaks volumes. It is difficult to be heartwarming without being melodramatic, but Roy succeeds in walking that fine line time and time again — whether it’s through descriptions of a new immigrant’s angst in America or a young man’s realization of class divides in India.

At one point in the novel, Romola finds a fall leaf she saved, preserved within the pages of a book—“still whole, but brittle, like memory.” Roy’s wise debut delivers that same rush of tenderness and nostalgia.

When did you move to India and what was the primary motivation?
I moved in 2011. I didn’t know for how long. I intended it to be a year but I sort of fell into a job with a new digital startup there called Firstpost which grew into one of India’s biggest digital news portals, and now that year has become three. When anyone asks me, “Are you in India for good?” I just say, “For now,” which is about as much commitment as I can manage. I moved there partly because I wanted to take some time to work on stories in India, do radio from there, and also because I wanted to be closer to family. My mother was growing older and not really up for making transatlantic journeys.

[Sandip Roy went to graduate school with the interviewer Poornima Apte at Southern Illinois University in Carbondale, Illinois, and shared meals with her in Apte’s small studio apartment.]

What memories do you have of Carbondale? Have you visited again? What did you get from that glimpse of small-town America that you might not have seen if you had been only in San Francisco?
My memories of Carbondale are sitting in your apartment and eating aloo sabzi and listening to k. d. lang. Carbondale was a huge culture shock for me coming from Calcutta. I’d never lived in a place so small, so quiet, so green—or landed in an airport that tiny. One of my suitcases did not arrive with me, adding to that feeling of dislocation. At that time without email or WhatsApp, India felt very far away and I was homesick and jetlagged. But Carbondale was also my first experience of living entirely on my own, being accountable only to myself, and understanding what it meant to live within a budget. So in a sense it was a critical part of growing up and adulthood that might never have happened had I not left Calcutta. And no, I’ve never been back.

Pure speculation...but do you think Avinash would have had the space to come out in today’s Calcutta? How would his situation have been different (if at all) from the Calcutta he grew up in?
I think Avinash would have had more resources available to him had he chosen to come out in today’s Calcutta. There would be the World Wide Web and chat rooms to connect to others like him. There would be parties should he choose to attend. Calcutta was the first city in India to host an LGBT Pride March and it still happens every year. And it would be a much more accepting environment on college campuses, etc. I think Avinash grew up in a more homo- ignorant time. Now it’s much more homo-aware. But having said that, even with all the resources available there are plenty of gay people who still get married because they don’t know how to tell their families or cope with it. And plenty of people in Avinash’s time chose to not live a lie. But I have to say that in India I always feel coming out is not as binary as in the West. It’s much more of a spectrum. 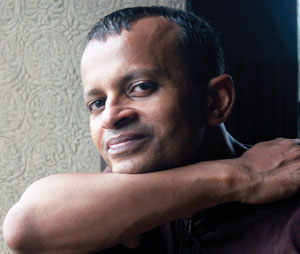 As a gay man yourself, how have you seen India change since when you came of age in the ’70s? With PM Narendra Modi befriending the likes of Baba Ramdev, who says he can “cure” homosexuality, what does that say about the future of gay rights in India?
I think gay rights in India are out of the closet no matter what Baba Ramdev or the Supreme Court might say. Even the recent unfortunate ruling by the Court overturning the Delhi High Court ruling on LGBT rights did not send everyone scurrying back into the closet. It actually added a certain fire to the Queer Pride marches. The marches now counted for something—a statement rather than just a parade down Main Street as they are in so many American cities. Like toothpaste, I don’t think LGBT Indians can be squeezed back into the bottle, and though two judges on the Supreme Court disagreed, even a cursory glance at media will show how far we’ve come in terms of coverage of these issues. So it’s a far cry from my early years when we barely knew any gay people in India other than the hairdresser Sylvie and the activist Ashok Row Kavi.

Like Amit, you too chose to try other careers. You studied computer science and transitioned to journalism. What propelled the move for you?
I had quit an MBA in India to come to do an MS in America. I had tried my hand at writing on the side for a few local publications like India Currents and through them come in contact with a nonprofit called New America Media. New America Media and its executive director Sandy Close took a chance on me and offered me a job. They were starting a radio show on local public radio and I tried out for it and it clicked. I did it for the next 10 years and it was a wonderful experience. So while the decision to quit and take a pay cut was nerve-wracking and hard, I was incredibly lucky in how it panned out and the people who took a chance on me. I hope Amit was as lucky.

The sadness of living as a new immigrant is perfectly captured by the mail that Romola gets, addressed to “Current Resident.” Can you describe how your new immigrant experience paralleled hers? What sense of discovery did you have and what was the sadness?
Perhaps that’s not so true anymore. Now the new immigrant might be in touch with home all the time via phone/email/social media and not even be expecting that airmail letter the way I did. But India at that time seemed so far away. Calls were so rationed my mother would, over the course of the week, write down all the things she needed to tell me so she didn’t miss anything. There was a great sense of discovery, too. I discovered what it meant to stand on my own feet. Indian men, or perhaps it’s Bengali men, are notoriously prone to being pampered and waited upon. America was in that sense a discovery of self, a snapping of an umbilical cord. But there was sadness, too. Every time I came to India everything seemed grayer and more frail.

I thought you touched on class in many beautiful ways. Can you talk about these subtle manifestations of class in India and maybe share a personal example of how you have seen it play out.
Class was probably the hardest thing to write about and something I became far more conscious about after I lived in America. In India we are used to hearing about caste but in the sort of urban middle-class milieu I occupied class was the real great divider. It was only after going to America and coming back that I became really conscious about the fact that my relation- ship with, say, a plumber or a carpenter in India would be very different from that same relationship in America. Most of us all grew up with servants’ child- ren as early childhood friends. But the great lie was usually that we treat the servants as “family.” And I wanted to show that it was never really family across that class divide when push came to shove.

Do you remember a funny re-assimilation incident after your move to India?
I was getting the kitchen designed in my flat and went to the modular kitchen store in the local mall. After I had looked at all the designs, approved the cabinets and their finish, the guy asked when I wanted to come back with “madam” to give the final approval. When I said there was no need for that and I would just do it myself he looked terribly dubious. Finally I had to persuade him that there was no madam and I, despite being a man, would actually design and approve my own kitchen. And I realized India, in some ways, was no country for a single man.