COVID-19  In-depth info for Indians in Atlanta/Georgia. Click here
Home > Magazine > Features > Books: The World According to Koshy/ Stories Imbued with the Music of Poetry

Books: The World According to Koshy/ Stories Imbued with the Music of Poetry 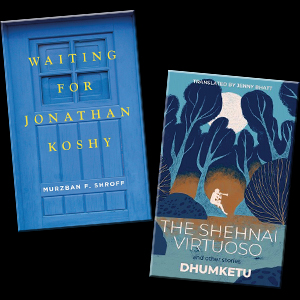 We’ve all known a Jonathan Koshy—that often larger-than-life friend or acquaintance whose charms, disarming wit, and stories of past achievements and heroism almost allow us to ignore the glaring inconsistencies and contrasts between their narrated life and lived one. He is that friend who has answers to your problems and cannot question his own. In Koshy, Shroff has at once drawn up a portrait of Every man and Singular man.

The stories in Waiting for Jonathan Koshy (Astrophil Press) are narrated by Koshy’s friends as they await his return to the suburbs of Mumbai from his native state of Kerala. They’re united by their love of marijuana and Pali Hill. Each chapter in this quick read of twelve chapters finds Jonathan Koshy involved in some trickery or buffoonery—some frivolous, and some, like the time when he befriended and impregnated a young woman that he once met at a party using the fictitious persona of Prem Kotiyal, mildly troubling.

Each of Koshy’s four friends, the narrator collective, takes turns sharing Koshy’s exploits: fooling a debt recovery agent in one episode, saving a family from the clutches of an angry mob in another, playing a clever prank on eve-teasers in one, or escaping a drug-fueled late-night rave in another.

True to form, in one of the stories, Koshy falls for the leader of a non-governmental organization working with sex workers—a relationship that was mostly one-sided, passionate, and fizzled out even before it began, in the aftermath of a dramatic encounter of an anti-AIDS campaign gone wrong. At this point, Jonathan Koshy exclaims, “And know what, guys? I don’t feel too bad walking away. If nothing else, I knew I might have cured her. I might have exorcised some of that hatred…. I also figured out that India is a woman, a puzzling, enigmatic woman. Try as you might, you can never figure her out. You can love her, yes, or feel frustrated by her, but you can never fully understand her.”

Shroff’s writing comes alive in the descriptions of Pali Hill, its idyllic neighborhoods, and its affluence—“out here, there was old money, new money, big money, brisk money.” Various historical vignettes about Mumbai are woven through the episodic story collection, signaling to the reader the writer’s great love for his city. Shroff, whose other books include Breathless in Bombay and Third Eye Rising, has mentioned that he conducted extensive interviews with residents of Pali Hill and Bandra to construct an authentic portrayal of the neighborhoods. And it was in 104 Pali Hill, one of the friends’ bungalows, that Jonathan Koshy’s exploits would be shared over libations.

Waiting for Jonathan Koshy is a meditation on the twists and turns, the trials and the tribulations that one faces in life and the indomitable human spirit that shines through every twist and turn. “Life was his parent and Pain his teacher,” the author notes, about Jonathan Koshy—a fitting tribute that may well go on his tombstone one day.

In Koshy, Shroff has presented us with a character who is deeply relatable for an Indian audience—a man whose exploits are cinematic, at times melodramatic, and never lacking for action. Koshy is the guy that we all sometimes wished we were—the man who is not afraid to pick a fight at a movie theater only because the person in front is a few inches taller than him, or the good samaritan who stops a raging mob from setting his friend’s house on fire.

The narration, by friends Anwar, Prashant, Dhruv and Gussy, can at times feel flat, and the inability of the narrators to call out character flaws in Koshy lends the stories an air of inauthenticity. But perhaps what may come across as inauthenticity is the juxtaposition of vulnerability and daring that we see in every turn in Jonathan Koshy’s stories.

In the end, though, the reader is left with a greater sense of humility, acceptance, and gratitude for those people in our lives who are inexplicably heroic and mundane, generous and peevish, high-minded and crass—a bundle of contradictions, much like Jonathan Koshy.

Girija Sankar, a freelance writer based in the Atlanta metro area, works in Global Health.

Stories Imbued with the Music of Poetry

A collection of Dhumketu’s resonant short stories in Gujarati, nimbly translated into English by the writer Jenny Bhatt, was published earlier in India. Called The Shehnai Virtuoso, it has now been released by Deep Vellum, the largest American publisher of literature in translation. Bhatt is the founder and editor-in-chief of Desi Books.

The Gujarati fiction writer Dhumketu was born Gaurishankar Govardhanram Joshi in 1892, eighteen years after the birth of American poet Robert Frost. Dhumketu died in 1965, two years after Frost. I conflate the lives of these two men not because they were contemporaries, which they were, but rather to suggest that short stories and poems are siblings that cross literary borders.

In his Guide to the Craft of Fiction, Stephen Koch writes, “A short story, like a lyric poem, … may use its narrative as much to establish and fortify an image as to follow the tale to its dramatic outcome.” Koch proceeds to use Frost’s “Stopping by Woods on a Snowy Evening” to make his case. He insists that “the poem could be a short story”—there’s a setting (“Between the woods and frozen lake”); a moment in time (“The darkest evening of the year”); characters (the narrator, his horse, and the man “Whose woods these are”); and there’s conflict of whether to stay or go (“The woods are lovely, dark and deep, but I have promises to keep, and miles to go before I sleep”).

In the same way that Koch says that Frost’s “poem has all the elements of a story collapsed within a single murmuring image,” I believe that Dhumketu’s short stories have all the elements of poetry built on the foundation of memorable imagery. And Jenny Bhatt’s translation of Dhumketu’s Gujarati makes the imagery vivid for Anglophone readers. Partly because I have a rudimentary appreciation of Gujarati, translations of idioms such as sab bandar ke vepaari add layers to stories such as “The New Poet,” where this particular image of “a trader in every port” plays a vital role. Jhumpa Lahiri, who writes and does English and Italian translations, believes that “to translate is to alter one’s linguistic coordinates, to grab on to what has slipped away, to cope with exile.”

“The Shehnai Virtuoso,” the title story in the collection, has an excellent example of an image that lingers in the reader’s mind: “When the tragic gloom, like the doleful, lamenting strains of jogiya music, would advance from that shehnai, then even his own father would lay a hand on his and be able to say only this much in a grief-drenched voice: ‘Son! Enough now. Enough. Any more than this will not be bearable.’” This image of the father’s hand on his blind son’s hand has immediacy and conveys the silencing of the son’s shehnai; at the same time, it heightens the haunting sound of that piercing musical instrument’s reed—and foreshadows the tragedy and grief that follow. So much is accomplished in these few descriptive lines, which I have reimagined as poetry with line breaks:

When the tragic gloom,
like the doleful, lamenting strains of
jogiya music,
would advance from
that shehnai,
then even his own father would
lay a hand on his
and be able to say only this much
in a grief-drenched voice:
“Son! Enough now. Enough.
Any more than this will not be bearable.”

Most of Dhumketu’s compelling stories in this fine collection similarly turn on an image. The book’s first—and, in this reader’s opinion, finest—story, “The Post Office,” contains the image of a daughter’s letter that her father never receives. Although I can rightly be accused of being a sentimentalist, it is not the sentimentality of this story that is remarkable. Dhumketu’s masterful use of similes and metaphors are perhaps why Bhatt opens the book with “The Post Office.” Here’s an outstanding hook of an opening sentence: “The hazy dawn sky was glittering with the previous night’s stars—big and small—like happy memories shimmering in a person’s life.” This simile is brilliant in shedding light. By reversing what is compared (hazy dawn sky to memories rather than the happy memories to the sky), Dhumketu reveals both the setting and the narrator.

Ali, the aging father who longs for words from his daughter who has moved away after marriage, was a hunter in his youth. “Now Ali had learnt what affection and separation meant. Earlier, one of the pleasures of the hunt was the baby partridges running around in bewilderment once he had shot and killed the parent.” It would be powerful to read about the death of a baby partridge, for that would incite feelings of a parent’s loss; but Dhumketu inverts the loss with the parent’s death. And later in the story, after writing metaphorically that “the post office … became [Ali’s] holy land and place of pilgrimage, “Dhumketu turns the tale once more. The postmaster, who had at first been dismissive of Ali’s futile and pitiful daily march to the post office, learns that his own daughter is ill in a faraway country.

While Dhumketu wrote his stories in the faraway Gujarat of the early 20th century, he remains relevant to the modern reader with an open heart and an appreciation for poetic writing that merits more than the 1,000 words of this review. Though each story could be reviewed, I close with “Mungo Gungo,” an ode to a man who saved children by diving into a reservoir that might have drowned those young lives. His swimming skill was an art form, and as “the artist was creating his artwork … the artwork was creating the artist.” This reminds me of another MG, of Mohandas Gandhi and his Sarvodaya philosophy: “you build the road and the road builds you.”

Just as Gandhian thought remains relevant for those willing to slow down on today’s expressways, so do Dhumketu’s stories from the village road.

For RCO’s Papa, Chhaganlal M. Oza, who loves the sweet sound of Gujarati and at 94 has witnessed the “lovely woods” of India’s independence and the “tragic gloom” of Gandhiji’s assassination. Papa has miles to go before he hears the shehnai in his sleep.