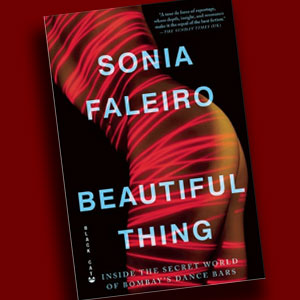 Meet Leela. A confident, vivacious, and headstrong 19-year-old whose personality is desired and revered, if not envied. She is the highest paid dancer in Night Lovers, one of Bombay’s notorious dance bars on Mira Road, and the vehicle that allowed award-winning writer Sonia Faleiro to transport her readers into a world that may be as unmentionable as the slums no one ever wants to talk about.

After five years of research, reporting, and spending time with the girls of Mira Road, Faleiro, a reporter with The New York Times, opens up a world where love, sex, and violence are rampant.

Beautiful Thing follows Leela (who is shadowed by Faleiro) into the subculture of Bombay, where politics, sex, violence, gangsters, and prostitutes are the norm. But what is also the norm, one learns, is that Leela is perfectly content with her lifestyle. She knows her fate, having been pimped out by her father at a young age. She has run away from home in Meerut, and never looked back.

She represents the segment of Indian girls who weren’t lucky enough to go to proper schools, live in decent-sized homes, or be nurtured and overprotected by their parents. Leela belongs to a community of women who are lessened by the very fact they are women. Leela goes on to describe her “fortune”:

“When you look at my life… look at it beside the life of my mother and her mother and my sisters-in-law who have to take permission to walk down the road. If my mother talks to a man who isn’t her son, brother, or cousin, she will hear the sound of my father’s hand across her face, feel fists against her breasts.”

When most of us have a hard time accepting our own destinies, Leela’s bold acceptance of her fate is almost admirable. To Leela—although the reader learns that she has quite the quintessential fantasies of marriage, love, and the knight in shining armor—this lifestyle was her taste of freedom. “Every life has its benefits,” Leela says. “I make money and money gives me something my mother never had. Azaadi. Freedom. And if I have to dance for men so I can have it, okay then, I will dance for men.”

Aptly so, Faleiro recalled in an interview with Khabar, “I was so impressed by [Leela’s] confidence, and in person, she is extraordinary. She is incredibly smart, and no fool.”

It is those brains, the charm that Faleiro exudes well through her prose, that has you rooting for the 19-yearold because it is the same “confidence” that has you believing that Leela, and possibly other girls like her, are capable of so much more—regardless if they are aware of it.

That possibility is moot, however. “We don’t want to see this actuality of India,” said Faleiro. “A lot of their suffering comes from the caste system and gender bias. How do you battle this in society?”

The reality of the situation gets tested further when Maharashtra’s Deputy Chief Minister and Home Minister R.R. Patil introduced The Bombay Police (Amendment) Act of 2005 that “banned dance performances in eating houses, permit rooms, or beer bars”—otherwise known as dance bars. He called them “pickup points for prostitutes” who “deprave public morality.” The act forced 75,000 bar dancers to lose their jobs. The majority of them are unskilled and uneducated, leaving them with no options for another career or job at hand. Although the act was overturned the next year on the basis of equal rights and freedom, it is only natural that it left a discomforting feeling.

“It became discomforting to see other people’s lives play out in front of you and all you want to do is help, but could not,” said Faleiro. “But, you can hope for awareness and wish that life could be lived with justice. If not that, at least in fairness.”

Faleiro’s writing makes it easy to forget that she brings you into a real world scenario. The storytelling constantly plays mind tricks, making you believe you are reading a work of fiction. But, immediately, you realize that what you are reading is very real and very true. These are not developed characters, but actual people—women—with feelings, thoughts, and dreams as real as yours and mine.

Through Leela’s story and Faleiro’s fast-paced weaving of facts and humanizing a group of people that are constantly prejudged for their lifestyle, Beautiful Thing shatters mindsets. It is a disturbing and harsh reality that is the truth of the dance bars and girls who dance in them. One hopes for the happy ending that many look forward to at the end of an underdog story, but this is the exception to the rule.