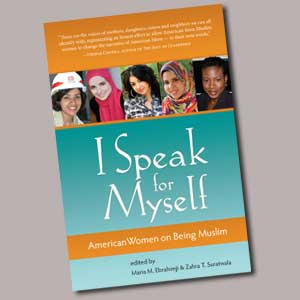 I Speak for Myself: American Women on Being Muslim

Generations being raised in this new millennium will know Facebook, iPhones and disconcerted conversations of politics, religion and war. For the past decade, we have known a world only after September 11. The aftermath of that horrific day placed into the limelight the culture and religion of Islam.


Islamic culture and religion were perceived negatively around the country. Mosques were vandalized, and arguments erupted over building a cultural center at the scene of the crime, Ground Zero. Followers of Islam have found themselves defending the very principle of America: individuality.

Exposed to stereotypical conclusions about her faith, Maria M. Ebrahimji, along with Chicago-based writer and editor Zahra T. Suratwala, compiled and edited the prose of 40 stories of Muslim women who share personal moments of knowing, learning, identifying and owning Islam. “During my travels abroad and speaking engagements here [in Atlanta], I have encountered many non-Muslims who just don’t have any understanding of my faith and don’t really know where to turn,” said Ebrahimji, who is an executive editorial producer at CNN. “The literature out there on Islam to date has been very academic and the stories about Muslim American women in particular have been told through the eyes of non-Muslims or didn’t showcase the diversity of Islam in America.”

I Speak for Myself: American Women on Being Muslim is a collection of essays written by Muslim women of various backgrounds and professions. Their roots are Arab, Pakistani, African-American, Indian, Iranian, Libyan and Afghani. All the women are under the age of 40, and showcase the generation that is up and coming in today’s society. “We really wanted to capture a segment of the Muslim-American community who haven’t really had a voice thus far. The women in this book are of the same generation as us, proud citizens, family members, and contributors to society,” she added.

The introspective pieces reflect the sentiments one can expect from people growing up in a culture different from their roots. Some essays are built around the hijab, the head covering worn by Muslim women, and other essays reflect personal and professional struggles.

Dewnya Bakri-Bazzi, a law school student, got caught between her love for basketball and her religion. Bakri-Bazzi’s strong religious beliefs influenced her conservative dress style. In place of the customary shorts and tank tops, Bakri-Bazzi wore long T-shirts, ankle-length pants and her head scarf to show her respect for her culture, and ran into conflicts at tournaments where referees showed no pity and the crowd no understanding. Mariam Sobh had a doe-eyed view of a world after college where she expected a job based on her skills and not looks, but disillusionment replaced her credulity when she realized she was being negatively perceived because of her hijab—a producer told her that although her talent was obvious, the climate was anti-Muslim. And Fatemah Fakhraie hated “going back to the little place I’ve outgrown,” but in the end, she realizes it’s a duty to take care of one’s aging parents and she would eventually need them as much as they needed her.

With essays that focus on breaking out of cultural misperceptions and coming to a place of internal and external acceptance, the book speaks not just to Muslim women. The women in the book share their discomfort at their initial attempts to disown their religion and culture and then owning Islam as part of their identity; the realization that some responsibilities and duties come with being a Muslim; or the experience of finding peace in a troubled marriage through religion.

“The message is to speak for yourself and not let anyone else seize your narrative or define who you are,” reflected Ebrahimji. Each essay, when stripped of the hijab or the faith, tells the story of girl who is in search of herself and learns to accept herself as she is when everything around her is saying otherwise.