Books: The Hindus by Wendy Doniger 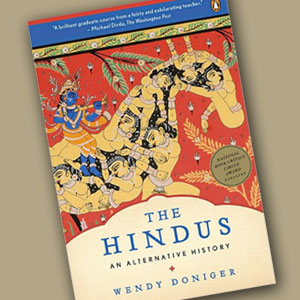 The Hindus: An Alternative History is a tome rich in history, analysis, interpretation and opinion. It is written by one of the foremost scholars on Hinduism, also a Sanskritist. A caveat here: I am neither a Sanskritist nor a student of world religions. However, I do represent the intended or potential readership for this book, which, notwithstanding the extensively researched references and bibliography, is still meant to be accessible to the lay reader. I do also represent an audience that seeks to better understand the religion of their birth, not as practitioners of the religion or faith, but as mere mortals grappling with the enormity of myth, tradition, ritual and practice that came to define the religion for them in their formative years.

Wendy Doniger is the Mircea Eliade Distinguished Service Professor of the History of Religions in the Divinity School at the University of Chicago, and the author of more than a dozen books on or related to Hinduism. In Hindus: An Alternative History, she delivers a comprehensive account of an alternative reading of Hindu philosophy, representing the voice of the marginalized in the ancient texts. But as the author is quick to point out, Hindus is an alternative history and not the history. Much of what we know about Hinduism is what we know through texts, or the written word in Sanskrit. She argues that texts tell us not just about who ruled but also about who was ruled, and about the voice of the ordinary people, if you look close enough.

Since a history of Hinduism is in a sense a history of India, Doniger traces civilizations in India starting from the merger of a breakaway landmass from Africa on to the central Asian landmass, and then chronicles the Indus Valley Civilization, the Vedic peoples, the trajectory of the Vedas, the Brahmanas, the Upanishads and the two great epic poems—the Ramayana and the Mahabharata. Doniger also analyzes the Bhakti traditions emerging from South India, briefly touches upon the Tantric Puranas, and then moves on to Hinduism under the Raj and finally Hinduism in contemporary India.

Since her training is primarily in philology, Doniger organizes her alternative history around the texts—the Vedas, Upanishads, and the epics. Throughout the book, she sets the stage by providing commentaries on certain sections or stories from the texts and then parses out the voice of the marginalized, whether it be women or the lower castes. This teasing out of the faint voices is then further analyzed through the recurrent themes of violence and the representations of animals such as the horse, the dog and the cow, to represent power, pollution and purity respectively. Doniger’s study of violence brings to light the contending forces within and without Hinduism that seemed to both condone and accept violence (through ritual sacrifices) but also eschew it (in part owing to Buddhism and Jainism’s distancing from the idea of ritual violence). As an example of how the author teases out the subaltern voice, take the story of Janashruti and Raikva from the Chandogya Upanishad. King Janashruti, a Kshatriya, seeks to learn from Raikva, a homeless person and of a lower caste, his secret knowledge, suggesting that there may be non-Brahminic sources to some of the ideas expressed in the Upanishads. But ultimately, the point is that a search for true source or origins may be futile. What would be more important and interesting is to understand how different faith or belief systems have fed into a larger tradition that we now call Hinduism. Particularly useful for a quick grasp of the origins of the Veda are Doniger’s summaries on the competing theories on the Aryan invasion/migration. She clearly lays out the four competing theories, and then systematically argues why (or why not) any one theory could hold water.

The numerous sidenotes can at times be distracting, although some of them can be treated as stories within stories like those in the Kathasaritsagara or the Arabian Nights, goading the reader to take a break and delve for a moment into a vignette. (If you do, dive into the vignette on page 51 on Gondwanaland.)

For an amateur collector of etymologies this book is a treasure trove. Did you know, for instance, that the Sanskrit jara is cognate with the Greek georon, from which is derived the English word “gerontology,” or that the noun karma comes from the verb kri, which is cognate with Latin creo—to make or do?

What also emerges in Doniger’s work is a theme that we now find in just about any popular account of India—the notion of multiplicity, or that of India as a land of opposites. But Doniger’s is more specific to Hinduism and is reflected in seemingly opposite concepts such as extreme asceticism, renunciation, and speculations on monism in the Upanishads, on the one hand, and opulence, or the Kama Sutra, on the other. We all know this, and indeed it’s the first thing that is offered up as evidence of the plurality that is India. For instance, in speaking of the shivalinga and its treatment both in its physical sense and as an abstract symbol, Doniger suggests, “(H)ere is a fine example of a tradition driving one foot on the brake and the other on the accelerator.” But elsewhere, she also cautions us, and rightly so, that we should be wary of “essentializing these oppositions...we should regard these dichotomies as nothing more than general guidelines...that help us find our way through the labyrinth of ancient Indian religious groups.”

If anything, through Doniger’s Hindus, we come to understand that folks in ancient times too struggled with issues that we grapple with today—like morality, violence, violence towards animals, materialism, renunciation, etc. In Doniger’s view, a history of Hinduism or ‘isms’ should reflect that. And hers does that, lucidly.

Doniger’s brilliance as a comparative analyst of texts also comes through in her discussions of the concepts of dharma, karma, and moksha. How could an individual reconcile sva-dharma, (what is expected of you in this life) with general dharma? If your profession is butchering, she asks, how could you reconcile that with the general dharma of nonviolence? She calls this puzzle “the paradox of absolutism and relativism,” which is perhaps another pithy summary of Hindu thought.

The language, though scholarly, is accessible if the lay reader makes a concerted effort to plough through. Once the reader settles in for the long haul, the prose emerges as a conversation between the reader and the author, any questions being soon answered or raised by the author herself, either in the prose itself or the many footnotes or the comprehensive bibliography. The book is peppered with delightful wordplay (the pali-valent Pali speakers) and the commentary is often irreverent and tongue-in-cheek. The Aryan invasion or migration is “the charge of the light-(skinned) brigade” and karma, when expressed as a palindrome, is: “Do Good’s deeds live on? No, Evil’s deeds do, O God.”

Popular criticisms seem to zero in on her interpretations of the Ramayana and her treatment of Rama as one who was ill at ease with his sexuality. In a tome such as this, factual inconsistencies may always creep in, but nothing that a new edition could not fix. But interpretative inaccuracies are harder to point out, especially when quoted or taken out of context. Admirers of Doniger’s work suggest the same—that her commentaries are always susceptible to misunderstanding when taken out of context. In her response to critics, Doniger says that ultimately, she is deeply appreciative of Hinduism, and that “she intends to go on celebrating the diversity and pluralism, not to mention the worldly wisdom and sensuality of the Hindus that I have loved for about fifty years now and counting.” But perhaps as other critics have suggested, Doniger seems to lump any and all criticisms (from the non-academic world) as right-wing fundamentalist rants. Just as there is a multiplicity of interpretations to ancient texts and epics, there is too a multiplicity of contemporary Hindu voices.

Once the skeptical reader understands that Doniger’s too is but one version of an alternative history, coming from a liberal scholar, the book should become so much more enjoyable. Doniger, after all is a scholar, a scholar’s scholar if you will. She is known as much for her work as for the criticisms from certain quarters to her work (porn fiction, some have called it, referencing her seemingly heightened attention to eroticism and sensuality in the texts). There are more people who know about the reception to her work than have read her works. But any discerning practitioner of Hinduism or admirer of the religion should first read the book, comprehend the brilliant arguments, the commentary, and only then counter it.

Some who have read the book argue that the intended audience is Western, in its repeated references to eroticism, and the hegemony of the male Brahmin text editors or poets. But, one could also argue that the intended audience is exclusively Hindu or at least Indian, given that the alternative history is a reading of not just the texts, but also the epics, and the folklore. Any reference to Periya Puranam, for instance, would be lost on a casual Western reader.

Doniger gets defensive when she justifies the book as an effort to “counteract their (the Hindu Right’s) claims and to tell the history of the Hindus the way I think it should be told, the way it is more to the credit of the Hindus.” Surely, this massive tome cannot be a mere response to the fundamentalists. Seen this way, the book becomes merely part of a larger polemic and it shouldn’t be. Even though Doniger claims that the book is a “backhanded compliment” to her detractors, homage to the religion that is now “being ruined,” this book is still not just that. It is too much of a scholarly work for her detractors to treat it as an olive branch. If anything, the book showcases the interpretive diversity in the texts and epics, something that the detractors have always had problems with. This is not to say that Hindus is a stifling academic treatise. If anything this review states otherwise. But Doniger must know now that no response would be an appropriate rebuttal for her detractors. The book speaks for itself and needs no justification.

A magnificent tour de force, and a must-read, but to be savored chapter by chapter. Read a little, ponder, soak it in, and then read some more. Savor the book as you will a glass of fine French red wine—the notes may be confusing and strange, the label not quite matching the notes at first, but at the end of it all, you will be that much giddier with the satisfaction of having read through a fascinating account of Hindu thought and philosophy.