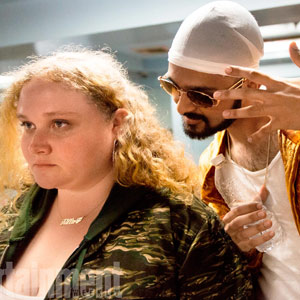 Dhananjay was studying philosophy in Grinnell College in Iowa when his parody rap videos went viral, winning him a plum U.S. movie role.

Actor Siddharth Dhananjay says he feels like he is free-floating in a fairy tale. He is the breakout star along with fellow newcomer Danielle Macdonald in the highly successful Sundance film Patti Cake$—though how that came to be is an extraordinary tale.

Born in Trivandrum, Dhananjay studied in India and Indonesia and eventually made it to Grinnell, a liberal arts college in Iowa, in 2014. Around that time, he started making parody rap videos with two of his friends for a college film festival, and a friend posted them on the WorldstarHipHop website. Using the rap moniker Dhananjay the First, he did spoofs of songs he loved to listen to, like Mario’s “Let Me Love You” and “Say My Name” by Destiny’s Child which went viral. “People loved the spoof rap videos, so we were like ‘Damn, okay, let’s do this, let’s keep doing a bunch of these, this is fun!’”

The videos also piqued the interest of Patti Cake$ director Geremy Jasper. “He randomly watched one the videos and shot me an email asking if I would like to be a part of a movie. That’s where it all started,” said Dhananjay.

Jasper whisked him away to the Sundance Labs in Utah to audition for the role of Jheri, a boom-bap-obsessed New Jersey rapper. Soon after his audition, Dhananjay’s student visa expired and he moved to Bengaluru to live with his aunt. Months stretched into a few years until Dhananjay finally heard back from the executives at Patti Cake$ and reunited with the cast on set in 2016. 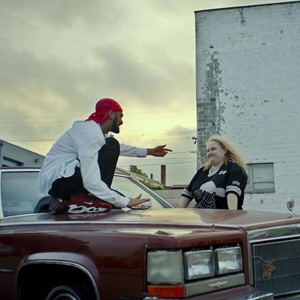 (Left) A still from the film.

Set in gritty strip-mall suburbia, Patti Cake$ chronicles an underdog’s quest for rap superstardom with humor, raw energy, and some unforgettable beats. The film captures the special bond between aspiring rapper Patricia Dombrowski (played by Danielle Macdonald) and her best friend Jheri (played brilliantly by Dhananjay) as they battle rivals in seedy gas-station parking lots and scheme madly about how they might finally earn some stage time for their new group, PBNJ.

Dhananjay, 24, who has been hailed by critics for his breakthrough performance, sat down for an interview with Khabar magazine.

You demonstrated sharp talent for rapping, that too in a New Jersey accent. How did you pull off the role with such self-possession?
I don’t have any formal training, but I do listen to a lot of music, especially hip-hop, R&B, lots of that good stuff, and I’m in tune with the rap world. I think a lot of that inspired me in terms of the performance. I just wanted to be as true as possible to this crazy character Jheri who is a pharmacist by day and rapper by night. He’s also devoted to his best friend Patricia whom he calls Killa-P, while the haters call her Dumbo.

I like to think that there are lots of young Indian boys like Jheri in Jersey who are struggling in their own lives trying to figure out what they want to do and who they really are.

I don’t have formal training in music but as a child I learnt classical Carnatic music inspired by my mom who went to music school.

Was it challenging to master the raps?
For me, the music and the rapping came naturally—that was the easy part. In fact, it was the opposite for me and Danielle. She had never rapped in her life, and was struggling to figure out the raps, but she is a great actor; she can act. It was just the opposite for me. The music part came easily to me, but I was a little apprehensive about the acting. In 2016, I did two months of introductory acting classes, rehearsed a lot with Danielle, and we shot the film in the summer of that year. I think I was the riskiest bet in the film.

Does a big rap career now beckon?
No, I don’t think so. Even with those parody music videos, I think it would be disingenuous to call myself a rapper. They are comic sketches at the end of the day. I never had any plans to be a rapper. I loved being able to do it for the movie, but I’m going to leave that to Jheri. I have come to love acting with this movie. It’s the one thing I want to keep doing.

In other words you are an actor who can rap, much like Ryan Gosling who is not a professional dancer but can dance.
That’s a neat way of putting it.

Did you become an actor by chance?
Yes, I’m a completely accidental actor. I went to Grinnell to study Philosophy and Economics—nothing to do with acting or theatre. This wasn’t in my plan. It just sort of happened, and while melting into the warp and woof of Patti Cake$ I realized I never felt so good doing anything else in my life. I’ve made a big career U-turn, and I’m having fun running with it.

How did your parents react?
They are really excited for me despite being quite clueless about the movie business. Still, they are happy for me and can’t wait to see what’s next.

Your life has unfolded like a fairy tale. Did you ever imagine your first movie role would be a career breakthrough?
Not at all! I was just hyped with the opportunity. Everything after that was beyond my wildest dreams. It’s actually been quite overwhelming. Nothing can really surprise me anymore. It’s been an amazing, mad ride.

I do want to add, though, that we knew in our hearts that Patti Cake$ was a special project. I’m glad audiences at the Cannes and Sundance Film Festival have loved the movie as much as we do.

Strong roles for South Asian male leads in the U.S. are notoriously thin on the ground but have you refused to audition for stereotypical brown skin roles?
Yes, I’ve definitely made a conscious decision that I’m not going to go in on stereotypical stuff. I think that coming off this movie, I have an opportunity not to have to do those roles. I lucked out. A lot of young brown actors have to go audition for roles that they don’t really like. I don’t fault other actors for doing that. Sometimes you just need to work. I’m lucky in a sense that this movie has such momentum right now that it will hopefully allow me to not do those stereotypical roles.

More than just a movie screen buzzword, “brown” is attracting the attention of everyone but people don’t necessarily know what they are buying into. There’s so much left unsaid and I think I have the opportunity to try to fill the space in some way and push the boundaries a little.

A lot has changed since Sir Ben Kingsley changed his name from Krishna Bhanji as a way to his first audition. Actors like Sendhil Ramamurthy, Kumail Nanjiani, and Dev Patel are not token diversity hires, but have lead roles in films which have mainstream success. Things are moving in the right direction, but when all is said, we still need to push the boundaries.

As actors, we are also seeing more roles being written for us because there are more Indians in every aspect of the film trade, almost like a support system that ensures it happens. There are well-known screenwriters like Mindy Kaling and directors like Ritesh Batra, Mira Nair, and Deepa Mehta.

Do you see any space for yourself in the Indian film industry?
I am hoping to do a reverse Priyanka Chopra. She’s a Bollywood superstar making it big in America. On the other hand, I’ve been discovered in America but I would love to act in India. I am a big fan of Indian cinema and would love to do something in India.

What are you working on right now?
I’m on a mission to get my O-1 Visa. It’s probably not the answer you would have expected but it’s tough for me to work in the U.S. on an Indian passport without the O-1 visa. Once I have that, I can audition for roles. The Patti Cake$ producers had me latch on, as an O-2, to my co-star Danielle’s O-1 visa as I didn’t have prior film credits to score an O-1 visa. They had to make the case that I was essential to her performance in Patti Cake$. My team is now helping me get an O-1 visa to live and be employed as an actor in America. But the visa issues are annoying and it’s a collectively stressful process for us all.

Any tips for young South Asians wanting to be actors or musicians?
People have a tendency to doubt themselves and their abilities. Trust yourself. Trust your gut instincts. Believe that you can do it, because the journey is mostly mental. If you don’t believe in yourself—things are not going to go anywhere. Be ready. Jump at anything that seems like an opportunity—a tryout or an audition—because you don’t want to let a once-in-a-lifetime opportunity slip away.

Uttara Choudhury is a New York-based writer and commentator for The Wire and Forbes India.