Causes: Riding for a Cure 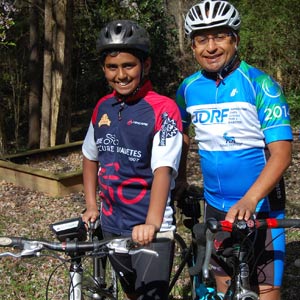 SHANKAR DEVIDAS had never raised money for charity. His biking days ended years ago, and the clunker in his garage wasn’t much of a bicycle. So he’s grateful that he overcame his fears to do a 100-mile ride for a cause that’s close to his heart. It’s an experience he cherishes.

Growing up in India I rode bicycles as a means of transportation, from a heavy Atlas to the slightly lighter BSA SLR. But cycling ended with my first moped until, 25 years later, I took it up again. That was three years ago.

In 2009, our then 6-year-old son, Varun, was diagnosed with type 1 diabetes (T1D). Unlike the more common type 2 diabetes, T1D is an autoimmune condition that destroys a person’s ability to produce insulin, leaving him/her permanently dependent on insulin. Varun has to check his blood glucose level multiple times a day (often averaging 5 or more), calculate the number of carbohydrates consumed every time he eats or drinks, and inject insulin to ensure that the resulting glucose can be absorbed into the blood cells. Without the life-support of insulin, the reality is that every person with T1D will literally starve to death even while eating four 7-course meals a day. But that is not even the half of it. Calculating the amount of insulin is a delicate balancing act that has to account for the number of carbohydrates consumed, exercise, emotional state, illnesses and infections, growth spurts, hormones, the kind of food eaten, and even the time of the day! Give too little insulin and the blood glucose level can rise too high, which can lead to a host of long-term problems. Give too much insulin and be faced with the even more immediate and potentially life-threatening hypoglycemia.

I don’t remember how I stumbled upon JDRF’s Ride to Cure Diabetes program, but I thank my stars that I took the first “rash” step. Otherwise, I wouldn’t have had the privilege of meeting, riding, and sharing an incredible sense of camaraderie and purpose with such a wonderful group of people. From triathletes to people who had barely ridden a few miles before, from teenagers to others in their 60s; from those who had raised hundreds of thousands of dollars to those who had never asked anyone else for a charitable donation ever before, this motley bunch of people train and raise funds every year to meet hundreds more like them at one of JDRF’s six spectacular destination rides, and ride anywhere from a few miles to 100 in a day, often pushing themselves to limits they had not known they had, in weather that can range from HOT in Death Valley to freezing (in Nashville) with one common goal—to find a cure for type 1 diabetes.

In November 2013, thanks to my wonderful friends and family, I achieved my fundraising target of $4,000 and also completed my first 100-mile ride at the JDRF ride in Tucson. I remember a moment around the 60-mile mark during that first ride, when I stopped at a rest area. It had rained almost incessantly since the start; I was wet, my teeth were chattering from the cold, and my legs were threatening to cramp up. The temptation to stop and get into the warm JDRF support bus that was waiting at that stop was almost overwhelming. But I got back on my bicycle and willed myself to pedal on—because I wanted to be able to look my son in the eye when I got back home and tell him that no matter how bad things may seem sometimes for him, he probably can push himself to give it some more.

I have since come back for more. I will participate in my third JDRF ride this year. While the training and fund raising can be challenging, the tremendous sense of community, camaraderie, and purpose at the rides make it all worthwhile. I have seen experienced riders who could have finished the ride quickly and been relaxing at the hotel, choose instead to double back to be with the newbies and encourage them. Coaches literally give riders a push up the difficult hills and help is never more than a rider away—whether you know them or not. During my first ride in Tucson, I was ill prepared for the 45 degree wet weather and could not have ridden more than a few miles, let alone complete it, if a fellow rider whom I did not know had not loaned me his spare rain jacket at the start line. This person actually came prepared to help someone—he had packed a spare jacket! To me that act epitomizes the spirit of JDRF Ride to Cure. It is about helping people.

I will ride for my son and for the millions who endure T1D. Tremendous strides have been made in the care and management of the disorder, but there is a long way to go and enormous financial resources are needed to keep alive research which will ensure developments that will impact not only patients of type 1 diabetes but also type 2 diabetes who find themselves dependent on insulin.

I will continue to ride till the day Type One becomes Type None.