Celebrations: Bali and the Brahmin Dwarf 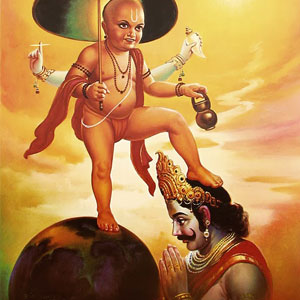 One thing that Indian culture is abundantly blessed with is the rich mythological stories surrounding our festivals, auspicious days, rituals, and celebrations. Here’s one about Vamana (the Brahmin dwarf) and King Bali, which is unique because it deviates a bit from the recurrent theme of “good versus evil”—to symbolize that submitting to the highest is more important than just being good.

The stories surrounding Diwali vary from region to region and even from family to family. Some speak of the goddess Lakshmi, who showers wealth and prosperity to the homes that are lit up with candle lights at their doorways. In some parts of India, Diwali celebrations include observance of the New Year, while in other states, the auspicious first day falls in the spring.

Though there are differences, a common theme across Diwali traditions stresses the importance of good versus evil. In one account, Rama and Sita return to Ayodhya after fourteen years of exile. The people of their land lined up rows of lit oil lamps to guide the two on their way and welcome them home.

Another story details the time a young Lord Krishna taught villagers to worship God and respect karma instead of spending their time making ritual offerings to Indra, the demigod with control over the rains, of whom they were afraid. Lord Indra, angered by Krishna’s words, sent harsh storms to the village, at which point Krishna lifted Mount Govardhan and provided the town with shelter from the elements. In this way, he showed the people that all true power comes from the supreme.

In a third legend, Lord Krishna comes down with his consort, Satyabhama, to defeat the powerful, demonlike Narakasura and stop his conquest of the world. Satyabhama launches the arrow that slays the asura, an act that is celebrated with fireworks and oil baths on what is now known, in some places, as Naraka Chaturdashi. Alternate versions have the goddess Kali or Krishna himself killing the asura, but in any event, the episode, once again, is symbolic of the triumph of good over evil.

However, the story of Vamana and Bali strays from this model. In this fable, the conflict does not end in a clear-cut fashion but rather is a matter of the balance of power. Lord Vishnu, the sustainer, seeks always to preserve and maintain the universe. Here, he's depicted as a force sought out to regain order but not necessarily to restore righteousness and banish that which is evil. In fact, in this case, the banished party is the one revered by the people. The tale of the dwarf and the asura king is retold both on the day of Diwali known as Bali Pratipada and over the course of Onam, the Kerala harvest festival during which Hindus worship Bali as the ruler of their golden age.

Bali and the Dwarf
The benevolent asura king Bali was known across the lands for his good governance. Word of his generosity spread far and wide, and coupled with the devout spirituality through which he obtained many boons, Bali soon took rule over the heavens in addition to reigning on earth. He brought peace to the realms, but the devas worried that they would never regain control of their kingdom and turned to Lord Vishnu for assistance.

“Lord Vishnu,” they pleaded, “You are the only one who can help us.” The gods explained their fear that Bali would never relinquish the heavens.

Vishnu calmed the devas. He decided to test the king to see if he truly was pure-hearted.

The lord appeared at Bali’s court in the form of his fifth avatar, the Brahmin dwarf Vamana. When he arrived, the king Bali was in the midst of performing a yajna in order to garner more spiritual power. Bali had committed to giving alms to anybody who asked during the yajna. With this in mind, Vamana approached.

The king, feeling blessed to be graced with the presence of a Brahmin, offered to give Vamana anything at all that he desired.

“I do not require much,” the dwarf said. “I am a simple man, and all I ask for is three steps of land.”

Because of his visitor’s short stature, the king laughed. “Three steps of land? You insult me by requesting so little.”

And yet, Vamana insisted, that was all that he needed.

Bali agreed to bequeath the land to the dwarf, but his trusted advisor, the guru Shukracharya, had grown wary. He warned the king that something was amiss, that Vamana did not appear to be any ordinary Brahmin and therefore must be a god taking human form.

But the ruler of the asuras had grown proud for all of his munificence. He welcomed the opportunity to grant any being a desired wish. Besides, as he told his guru, “I have promised this, and now I must keep my word.” He completed the sacred rituals and gifted the land to Vamana.

It was then that the dwarf transformed into his true self: Vishnu, the great preserver. He grew taller than the king, than the palace, than the mountains and even the skies.

The king, humbled, fell to his knees. “My Lord—“ he cried, but Lord Vishnu cut him off. “All I ask is for my three steps,” he said. With his first, he covered all of the heavens. And his second step traversed the entire earth.

Lord Vishnu looked at the king Bali. “You promised me three steps,” he said. “I have taken two, and what is left?” “My Lord,” the king kneeled, “Place your last step on my head.”

Thus, Vishnu used his third and final stride to push Bali into the netherworld. But even as he did this, he was impressed by the king’s devotion and bestowed upon him both a title in the realm of the underworld and a boon: “On one day a year, you may rise and rule over your people.”

And so it is that on Bali Pratipada, the great and benevolent king is able to greet his constituents once again. They pray for the prosperity they were shown under his rule and light candles and diyas in honor of his return.