Champs: The ABCs of Bees 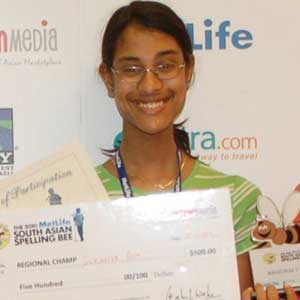 Nine out of the last thirteen winners of the National Spelling Bee are Indian-American kids. Considering that Indian-Americans make up about one percent of the U.S. population, that’s nothing short of a coup. What exactly is the secret of their success?

Maybe the success of these champs has a lot to do with the culture Indian immigrants bring over to this country. Academic excellence is very highly regarded in Indian society. In fact, it ensures a social standing like no other. “Since most of the successful careers are based on academics, as a culture we are focused on academic excellence. It is ingrained in us, as part of our upbringing,” feels Manish Sarda, proud father of Atlanta-based Nilai Sarda, the first runner-up of the National Geographic Bee 2011.

“With so much competition (in India), children are brought up to pursue academic excellence in order to be successful,” says Geetu Duggal, mother of Srijan Duggal, winner of the New Orleans chapter of the Spelling Bee 2011. “Since we are all first- or second-generation immigrants, it will still take some time for our thinking to change, to focus on fields that are not academic” adds Sarda.

“Our parents instill in us, from a very young age, a love for learning and knowledge. Because we love to learn, we are dedicated to it. Our parents teach us the value of good work ethics and this is what helps us to be successful,” says Nilai Sarda. In fact, this is the same work ethic, combined with a fierce desire to prove their capabilities, which makes Indians successful across fields all over the world.

Training for competitions like the Bee provides a strong foundation. “It makes them sharp. It improves their memory and their capacity to grasp so much information in such little time.… If they can do all this, other things will come more easily to them,” observes Duggal. Recruiters respect the hard work and discipline contestants put into preparing for contests like the Spelling Bee and the National Geographic Bee. Being successful takes years of hard work, and the better you train, the more successful you are bound to be.

Dr. Balu Natarajan was the first Indian-American to win the Spelling Bee, in 1985. He observes, “We put a lot of emphasis on academic competitions since academics have always been important among us and the community knows we can do well.” According to Rahul Walia, the brain behind the South Asian Spelling Bee, academic competitions appeal to parents because they exercise the minds of the children.

For Sukanya Roy, the winner of this year’s Spelling Bee, preparing for the Bee was a great way to understand the intricacies and complexities of the English language.

“Studying language patterns and the meanings of the words and their roots fascinated me. I have expanded my vocabulary. This will also help me become a better writer in the future,” says Sukanya. “Winning instilled in me the importance of setting goals and trying to achieve them. Hopefully, this achievement will also help me in my college application process.”

But is the Indian community pushing its children to the edge, forcing them to put in hours and hours of study time into their already busy schedules? The parents and children and Khabar talked to don’t think so. “The process of competing in the Bee started in the school; we weren’t even aware of it,” points out Duggal. “Srijan was one of the winners in the school competition and was chosen to compete in the local Bee. When he won, he was so excited, and he was the one who wanted to take it forward, and we supported him. The desire to do well is his.”

Natarajan’s interest grew at school as well. “I had a fourth grade teacher, Ed Rouleau, who used to hold Spelling Bees in the classroom. I absolutely loved them. The following year, the National Spelling Bee offered local competitions, and I won the school Spelling Bee. My interest blossomed from there. I made it to the National Bee….” Sarda agrees that it is the intensity of the child’s keenness to pursue excellence that leads to success in competitions like the Spelling Bee. “Only when you desire something yourself that you do your best to achieve it. No amount of external pushing can guarantee success in life,” he adds.

Yet, usually, excellence in academics, including competitions like the Bees, is achieved by group effort, the group being the family. Natarajan notes, “A child who competes with the backing of his/her parents, and the resources they bring with them, has an edge over children who do not have the support of their entire family.” Walia adds, “Familial values such as education and a strong work and study ethic play a role in the success of the students. More important is the family involvement. The Spelling Bee engages the entire family, with parents often serving as motivators and coaches.”

One of the challenges of the prep work is to sustain the motivation and focus of the young minds. “Parents need to sit next to the child so that he/she knows how important this is for the parents,” according to Dr. Ratnam Chitturi, founder of the North South Foundation (NSF), which coaches Indian-American children for the Bee. Sukanya, too, attributes the success of Indian-American children to similar factors. “Their emphasis on education and love and respect for knowledge, tremendous support from their communities and the determination to work hard is what makes them successful.”

Besides family, good coaching too is vital for the success of the students. In 1989, Chitturi noticed that Indian-American children were performing well in all standardized tests except the ones in English. He created a Spelling Bee especially for the children of the community, to help them perform better. Since its first competition in 1993, the North South Foundation has spread to 75 locations, with 3000 participants each year. “Dr. Murali Gavini, the father of NSF contests, felt we need to start helping children when they are much younger and build their skills over a number of years. He began with spelling as a foundation and then expanded to vocabulary in the 1990s. Later NSF expanded to a variety of areas: math, science, geography, essay writing, public speaking and Brain Bee,” he adds.

The volunteer-run nonprofit also raises money for needy college students in India. In fact, the original idea behind the NSF was to encourage educational excellence among poor children in India and help them go to college. Says Chitturi, “This is still the number one goal for NSF, which plans to give 1,500 scholarships during the 2011-12 academic year alone.”

Seeing how well Indian-American children were performing in the Bees, Rahul Walia, an advertising executive from New Jersey, thought it would be best to get them to compete within their own peer group, raising the competitive bar. In 2008, he launched the South Asian Spelling Bee, which is growing tremendously, with 400 children competing at nine regional centers. The institution has expanded to Georgia this year. Besides training and encouragement, these organizations give away prizes to the tune of thousands of dollars each year, which aid the winners in their college education.

With so many people rooting for the success of Indian-American children, they are bound to excel. The winners of the Spelling Bee—Sukanya Roy (2011), Anamika Veeramani (2010), Kavya Shivasankar (2009), Sameer Mishra (2008), Anurag Kashyap (2005), Sai R Gunturi (2003), Pratyush Buddiga (2002), George Abraham Thampy (2000), Nupur Lala (1999), Rageshree Ramachandran (1988) and Balu Natarajan (1985) have made the community proud. In fact, Lala was featured in the documentary titled Spellbound, which focuses on how the Spelling Bee was a platform highlighting the American Dream for immigrants.

Apart from the cash prize of $30000, a $2500 U.S. savings bond, a $5000 scholarship, reference books and other prizes are awarded to the winners of the Spelling Bee, helping to secure their educational future. While learning the roots, definitions and parts of speech of a word as they prepare for the Spelling Bee and soaking up pages and pages of facts about countries the world over in readiness for the National Geographic Bee, contestants also enjoy other interesting hobbies. Sukanya, for example, likes hiking, rock climbing and ice skating, is part of her school’s ecology club, and enjoys playing the piano and the violin.

Competitors in the Bees typically get into ‘brainy’ careers. Lala worked as a research assistant at MIT’s Cognitive and Affective Neuroscience Lab after receiving her degree in brain, behaviour and cognitive science. She is now pursuing a medical degree. Natarajan is an internist and sports medicine specialist. George Thampy and Anurag Kashyap studied at Harvard and MIT, respectively.

Nilai, who wants to become a theoretical physicist, muses, “I like math and physics…I want to understand how the world works. I love academics; I wouldn’t go into any field just for the money.” What motivates these children to choose such fields? Sukanya remarks, “Perhaps these professions allow them to give back to their communities. Having one or more parents in these professions also inspires them to follow in their footsteps.”

[Anjum Dhir Kulkarni is a writer from India who has written extensively for publications in India and abroad across genres including lifestyle, health and technology.]