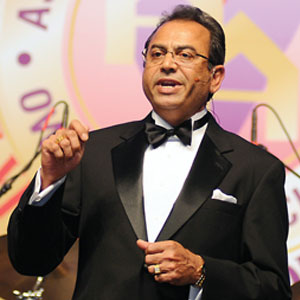 As one of the founding members of AAHOA, Chandrakant “C.K.” Patel has paved the way for many Indian-Americans in the hospitality industry. After almost three decades as a hotelier, Patel continues to make a mark in his chosen career, while also forging new frontiers in the hotel industry in India

For many people, the name Chandrakant “C.K.” Patel is synonymous with the hospitality industry. But very few know that he almost didn’t become a hotelier.

The Kenya-born co-founder of the Asian American Hotel Owners’ Association and its current chairman actually came to the United States in the late 1970s to work as a design engineer in the oil industry.
However, a slump hit the oil industry in the early 1980s and Patel knew he would have to look elsewhere to earn a living. The idea of owning and running a hotel presented itself to him through a hotelier friend whom he often helped. In 1982, at the age of 24, he bought his first hotel in Commerce, Ga. Six years later, he had succeeded in the business well enough to become one of the founding members of AAHOA, an advocacy group for South Asian hoteliers. “There was a lot of discrimination going on within the industry, especially by insurance companies and by hotel franchisers – and since many of us did not know the norms and the laws, it was easy to get taken advantage of,” recalls Patel.

Indians were buying small hotels throughout the country, and running them efficiently. But some competitors put-up “American-owned” signs as a way to attract guests. Being a small hotel owner himself, Patel saw the need for an organization like AAHOA that would help Indian businessmen overcome the discriminatory atmosphere of the 1980s. Many American owners, says Patel, started to feel threatened due to a sharp rise in Indian-owned properties. “Indians have hospitality in their blood, but the problem was that we did not have much education on this topic.” The hoteliers were also struggling with financing, franchising, and insurance issues.

AAHOA was born in 1988, soon becoming an information powerhouse for Asian hoteliers and the fastest-growing hospitality organization in the United States. Today, with more than 10,000 members who together own over 20,000 hotels with a combined market value of $130 billion, AAHOA has the largest membership among Indian business organizations in the United States.

Sacrifice and hard work are not new to Patel, who saw his parents give up many things so their children could have the foundation of a good education. “My mother brought my brothers, sisters and me to India while my father stayed in Kenya to work,” remembers Patel. He himself has continually used this philosophy of sacrifice and hard work in his advocacy for the hospitality industry.

After moving from Kenya to India, Patel graduated from Sardar Patel University in Gujarat with degrees in mechanical and electrical engineering before he migrated to the United States.
The value he places on education fostered his creation of the Certified Hotel Owners’ Program offered through AAHOA. The program has served over a thousand hotel owners and is considered a cornerstone in the organization’s professional development initiative.

“He is a really caring individual who always wants things or people to be better than what they are – he cares that individuals succeed in everything that they do,” said Martha Martin, president of the long-haul trucking company, Phil-Mart Transportations, Inc. Martin worked with Patel when he served on the Board of Directors for the Hometown Community Bank, located in Braselton, Ga., from 2004 to 2008.
Patel’s business savvy and knowledge of small business loans and the hospitality industry made his role on the Bank board effective, but because of the extensive travel his work required, Patel resigned from the board and concentrated his efforts on AAHOA.

Today, as Chairman of AAHOA, Patel continues its legacy of finding solutions to the unique problems that Asian hoteliers continue to face in the marketplace.

“As chairman, I want to focus on finding solutions to the constant problems that are within the industry.” The docket includes fair franchising, bank financing, professional education, and assorted legislation and regulation concerns that became prominent as the Indian-American interest in the American hospitality industry started to rise.
And, risen it has. According to AAHOA, over 60 percent of Wyndham Hotels, and 40 percent of the Holiday Inn Express chain, are owned by Asian Americans. This adds to the estimate that a staggering third of all hotel rooms in the country are operated by Indian Americans, according to the American Hotel & Lodging Association.

During his chairmanship, Patel plans to enhance hospitality not only within the United States but also internationally, by forging a relationship between India and the U.S. “What many people do not know is that with only about 105,000 hotel rooms, India has a shortage of hotels. The number of hotel rooms in all of India is less than those in Texas alone,” explained Patel. “When most of us go to India, we stay with our families. We don’t give hotels a thought. But India is becoming a hot destination as people increasingly travel there for leisure and business, but there are not enough accommodations.”

In January, Patel traveled to Goa, Mumbai and Ahmedabad—along with 36 AAHOA members, staff and guests—to promote tourism and hospitality between the two countries. Meeting with high government officials, Patel discussed the importance of boosting hotel space to accommodate the increasing demand in India. “Building hotels is very hard, because everything in India takes time,” remarked Patel. “We went there to establish single points of contact which will make it easier for hoteliers to do business.”

Making the processes of investing in and building hotel space in India is very important—independent advisory firm IndusView has projected that global hospitality firms will invest close to $1 billion in India in the next two years because of the increase in leisure and business travel.

Patel also met with Kumari Selja, India’s Minister of Tourism, to advocate the importance of streamlining the visa process to make it easier for American visitors to travel to India. “The U.S. and India have such a great bond and as an Indian, I want to promote the country, but we need embassies to provide better services,” Patel said. “If they start giving visas in a timely fashion, foreigners will flood India – boosting the need for hospitality services still further.”

Patel’s work extends to young students who are in hospitality. He notes that the excitement for this industry is hotter than ever. “While the hospitality industry as a lot of hard work, it is also fun.” AAHOA’s commitment to fostering youth in hospitality was displayed at the C.Z. Patel Hospitality Management School’s graduation event in Vallabh Vidhyanagar, Gujarat. Seventy students of the school participated in AAHOA’s Certified Hotel Management program, which teaches students the American way of hospitality management.

Based in part on his robust passion for the hospitality industry, Patel recently received an appointment to serve on the U.S. Travel and Tourism Advisory Board, which consists of 30 leading travel and tourism business leaders appointed by the Secretary of Commerce, Gary Locke, to be advisories on industry-related programs and policies.
Even as he establishes a future for AAHOA. AAHOA and U.S.-India partnerships in hospitality, Patel holds one mission dear to heart: serving the community. “I’m a firm believer in giving back,” said Patel, whose inspiration for AAHOA came from the same sense of service. His philanthropic mindset was influenced by his grandfather, who fought alongside Mahatma Gandhi for India’s independence.

His dedication to service brought on projects such as “Salute to Soldiers,” which provides free accommodation through the USO (United Service Organizations) to returning military personnel, and through TAPS (Tragedy Assistance Program for Survivors) to bereaved families of fallen soldiers.
Although he travels extensively, Patel, whom friends and family call a “workhorse,” finds time to preside over BVM Holdings, based in Atlanta, which manages three hotel properties.

Sean Childers, CEO of Hometown Community Bank, noted, “One of the things that stands out to me about [Patel] is his devotion to his family. With someone who works as much as he does, you would easily think that family is being sacrificed, but he is a great dad and a devoted husband.”
Patel went on to become AAHOA Chairman with the blessings of his wife, Alka, whom he wholly credits for the upbringing of their children, Deepum and Shama: “She did it all by herself and I give her all the credit for raising such great children.” The couple resides in Duluth, while their son Deepum works in New York City and Shama is pursuing a degree in medicine.

“In the end, it’s not just about the hospitality business – it’s about giving back to the community and your fellow human beings through education and service,” remarks Patel. “We have to help each other grow to be successful.”