Children's Books: Of Tigers and Weddings 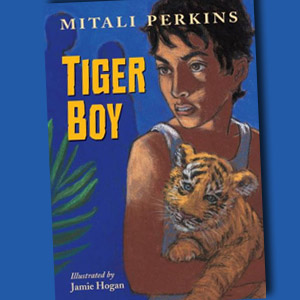 (On Tiger Boy, left): Perkins’ prose is exquisite. She paints a vivid picture of the landscape of life in the Sundarbans—the cool water of the freshwater pond that doubles as a swimming pool, the swaying golpata branches in the monsoon rains, the evening aroma of jasmine flowers and the wild guavas in the mangrove forest. The theme of environmental sustainability binds this riveting plot.

ANJALI ENJETI reviews two recent books, including one from an Atlanta-based publisher, that will appeal not only to children of Indian or South Asian heritage, but also to any American child who is curious about other cultures and continents.

I suppose I continue my subscription for the same reason my parents did—because it exposes my children to parts of the world they may not be familiar with and introduces them to people they may never get to meet.

With the internet, world geography is now accessible through a few keystrokes on a laptop. But nothing, in my opinion, examines the rich layers, the complexity, and the nuances of culture as organically or effectively as magazines and books.

Which brings me to two recently published children’s books by Indian-American authors that artfully examine the relationship between heritage, history and community, and a child’s self-discovery and independence.

By the age of 11, Mitali Bose Perkins, who was born in Kolkata, had lived in Ghana, Cameroon, London, New York, and Mexico. In two of her strongest books, Perkins portrays the life of a Bangladeshi girl who paints designs on rickshaws in Rickshaw Girl, and in Bamboo People she examines the political climate in Burma through a friendship between two teenage boys on opposite sides of war. Perkins’ transnational perspective makes her the perfect conduit to introduce young readers to characters straddling cultures.

In Tiger Boy, her latest middle grade novel, Perkins portrays a cyclone-ravaged island village in the Sundarbans in West Bengal, where young Neel is determined to save a tiger cub that has escaped from a reserve before the evil Mr. Gupta captures it to sell on the black market. “Gupta was a newcomer to the Sundarbans, but he acted like he owned the entire island…Gupta paid his workers stacks of rupees to threaten tenants who fell behind on their rent. He hired others to cut down the rare sundari trees that grew on the uninhabited islands of the reserve.” But Neel, an avid reader and English scholar, is pressured by his parents and his school’s headmaster to study for a scholarship exam for a boarding school in Kolkata. As he struggles to learn mathematics, Neel worries about leaving behind the only life he’s ever known on an island he cherishes. “Why had he been given this useless ability to absorb the meaning of words, sentences, stories, books? A boy didn’t need to read or write well to become a fisher-man or a carpenter.”

Perkins’ prose is exquisite. She paints a vivid picture of the landscape of life in the Sundarbans—the cool water of the freshwater pond that doubles as a swimming pool, the swaying golpata branches in the monsoon rains, the evening aroma of jasmine flowers and the wild guavas in the mangrove forest. The theme of environmental sustainability binds this riveting plot. And in Neel, Perkins has created another fully realized character who learns to stand up for himself, and his beloved homeland, no matter what the cost. 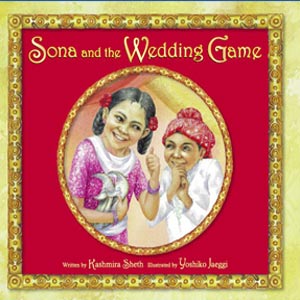 Kashmira Sheth grew up in Bhavnagar and Mumbai before moving to Wisconsin as a teenager. Her latest picture book, Sona and the Wedding Game, was inspired, in part, by her daughter’s wedding, her childhood memories of her own aunt’s wedding, as well as the wedding of the princess of Bhavnagar to a prince from Panna, which Sheth attended when she was seven.

Wedding Game is a tender story about Sona, a little girl who has to steal the shoes of her big sister’s husband-to-be at their Hindu wedding ceremony. Sona has never attended a wedding before and has never heard of this tradition, so she recruits her cousin, Vishal, to help. As Sona devises a plan, she considers what she’ll demand of her future brother-in-law if he wants his shoes returned. Sheth crafts a delightful story about family traditions, and illustrator Yoshiko Jaeggi’s pictures have an ethereal, dream-like quality and elegantly capture Sona’s hesitation, contemplation, and finally, her joy upon success. Sheth’s shy but mischievous Sona will have readers reminiscing about some of their favorite family weddings.

Anjali Enjeti (anjalienjeti.com) is an Atlanta-based novelist, essayist, and book critic. Her work has appeared in The Guardian, The New York Times, Huffington Post, Alternet, and elsewhere. She also writes for ArtsATL.