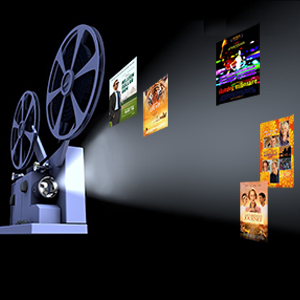 ROBERT HIRSCHFIELD, as a child, discovered India through films—and it’s a love affair that has never ended. Here, he reflects on how several high-profile Western films with Indo-centric themes continue to provide a passage to India.

The first Western film about India that I ever saw was Kim. I was eleven and impressionable, and thinking back, probably spiritually inclined, as it wasn’t the over-the-top adventures of Red Beard, the British spy (Errol Flynn), and his orphaned sidekick Kim that impressed me, but the humility of the Tibetan Buddhist lama (Budapest-born Paul Lukas) upon finding the holy River of The Arrow, for which he had been searching. I couldn’t get him out of my Jewish mind. For years, that “Tibetan,” who resembled a red-robed European parson, leeched into my being bearing the mislaid trademark of spiritual India. Ever since then I never missed a chance to see how Westerners saw the country I would eventually visit and come to love. 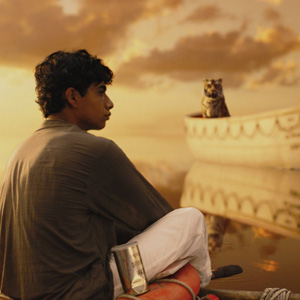 In Heat & Dust, the 1983 Merchant-Ivory film about India, there is the hyper Hindu-American, Chid, who blithely colonizes Hindu gods and rituals. Fast forward thirty cinematic years to Pondicherry and Pi Patel, the zoo owner’s son in Ang Lee’s Life of Pi, and we find India’s revenge on Chid. Hindu-born Pi, a boy even more spiritually acquisitive than his American counterpart, converts to Catholicism, embraces Islam, and as an adult, after his shipwreck, teaches a course in Kaballah in Canada. (Stranded on the high seas with tiger Richard Parker, Pi gives God one of the fiercest tonguelashings in film history, embodying, in his brownskinned outrage, the globalization of Job.)

Interest in the Indian holy man, once a staple of Western films about India (A Passage to India, Gandhi) may have waned, but it remains an interesting lens through which to view outside attitudes. In Heat & Dust, for example, we see Indian spirituality as the cherished post-colonial commodity that fed the Guru industry. (In addition to Chid, there is the local Indian holy woman who attracts the root-seeking British visitor played radiantly by Julie Christie.)

In Pi Patel, we see a spiritualized version of the modern Indian entrepreneur daring to challenge the West at its own game. A creative go-getter able to leave behind all but the most daft or visionary priests, ministers, and monks, he is one of the new breed of Indian characters in recent films: adaptable, susceptible, someone to contend with, respect, someone who quietly insists on the democratization of adaptability. 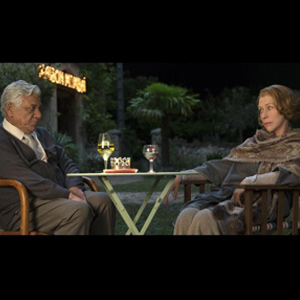 Hassan Kadam, The Hundred-Foot Journey’s culinary whiz and Mumbai refugee along with his family, is perhaps the better example of that new equality. Arriving in the South of France after a bout of unexplained Hindu on Muslim violence (Western filmmakers, including Danny Boyle, director of Slumdog Millionaire, seem content to employ intercommunal violence in India as a dismissive bridge from one scene to the next), Papa Kadam, Hassan’s father, a grizzled, determined energy field embodied by Om Puri, establishes Maison Mumbai, an Indian restaurant across the road from Le Saule Pleureur (The Weeping Willow), a top of the line restaurant run by the intolerant cuisine warrior, Madame Mallory (Helen Mirren.) A culinary turf war begins that is ultimately resolved by Hassan’s ability not only to adapt to, but to excel at French sauces as he excels at Indian curries. Meritocracy wins the day. Madame Mallory crumbles, lures Hassan into her camp as a cook, and peace is made between the two warring houses.

The story’s outcome is unashamedly predictable, but we are shown the contemporary dilemma of the talented young Indian abroad poised on the cusp of two worlds. What does he give up of his own world by entering the new? How can he resist entering the new? 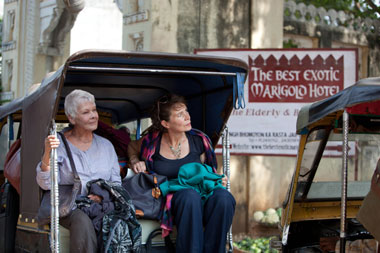 In The Best Exotic Marigold Hotel, a film about the old becoming new in new/old India, a tribe of elderly Britons descend on Jaipur and find themselves ensconced in a sprawling, repair-needing hotel with the occasional door missing from its customary attachment to a room. As this is a British film dealing with Britain’s fabled old colony, the film contains familiar echoes from the past. Like many of the old colonials, these Britons have come to India to reinvent themselves. Graham Dashwood, the retired gay judge, is in fact returning to the land, to the region he grew up in. 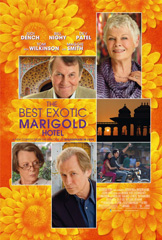 That aside, Marigold straddles all the popularized notions of the new India. Judy Dench’s reflective and financially hard-pressed Evelyn Greenslade takes a kind of consulting job for an outsourcing company. Call-taking for an outsourcing company also happens to be the job of the girlfriend of Marigold’s charming manager, Sonny, played by Dev Patel as if he were on speed, not stopping once to draw a breath. The outsource worker threatens to take the place of the holy man as the clichéd Indian in Western films.

Medical tourism also comes into play. Muriel Donnelly, one of Maggie Smith’s myriad film incarnations, is in India for a hip transplant. Of the many funny lines in Marigold, Smith has one of the best. Setting foot for the first time in her room, she is horrified: “There is an Indian in the room!”

Marigold’s tendency to romanticize India extends to the thorny subject of homosexuality. When Graham Dashwood embraces the Indian lover of his youth in full view of his wife and friends, the scene is at once so tender, passionate, nostalgic, and genuine that you accept its reality, allowing yourself to forget what country you are in, and what a hidden away moment that would be in actuality. When Dashwood succumbs to a heart attack, both his newly acquired geriatric family and his Indian lover and his family attend the Hindu cremation ceremony. Again, you allow yourself to forget how improbable this would be because it is handled so sensitively.

Part of our attraction to film is its ability to embroil you in make-believe landscapes, and Marigold certainly does that. It’s kind of an endearing Indo-geriatric fairy tale. 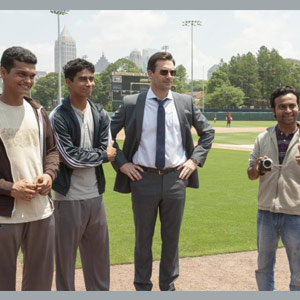 The Million Dollar Arm sounds like a fairy tale—more precisely, like the mother of all American fairy tales, only set in India. An LA agent down on his luck travels like an explorer to the last, vast, untouched Asian market for American big time sports to find Indian pitchers with Major League potential. That this happens to be a true story makes it weirder. Agent J. B. Bernstein conducts a nationwide pitching contest, with an eye towards cricketers (the two winners turn out to be a javelin thrower and the son of a truck driver) to bring his scheme to fruition.

Like Marigold, Million Dollar Arm is able to laugh not only at India (Bernstein’s Indian handler instructing him as to the fine points between “a bribe” and “a bypass”) but at the visitor’s visceral fears of its unhygienic reputation. The elderly American scout Ray Poitevint (Alan Arkin) is either suffering from narcolepsy, or the worst case ever of India avoidance. We seldom see him with his eyes open. 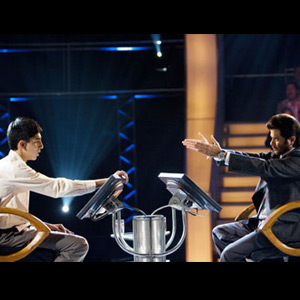 In a country where so many are so desperately poor, it is curious to find two films offering such far-fetched, if stunningly dramatic, advancement schemes. But perhaps they are to be seen, in a way, as extensions of Bollywood’s nurturing escapism.

Slumdog stands unrivaled, reviled and richly praised among the new wave of films about India. An astonishing visionary collage, Boyle presents us with a split-level Mumbai. In the Dharavi netherworld, children are rounded up, deformed to work as beggars by a reptilian Indian Fagin, a character straight out of Dickens. They are also chased by police in a scene so energetically choreographed it can almost be mistaken for a West Side Story dance of the desperate. Side by side with Dharavi, luxury high rises shoot up to the sky—contradictions all Mumbaikars live with.

The notion of the high stakes quiz as redemptive, where the triumph of one lucky slumdog is substituted for the triumphs of the unlucky many, makes one uneasy about Boyle’s mythology. Once the details of child degradation and ruin are spread before us, a moral dimension rudely rears its head, demanding the attention it is destined not to get in a film that steamrolls towards the fulfillment of its Hollywood-honed screen destiny: one man’s triumph over adversity.

Slumdog is without a single dull moment. It shares that with all the other films about India. The new adaptable India, free from its traditional insularity, and the West’s trusty outsourcer, may fuel the story lines, but it is the old, inexhaustible life force of this country that motors these films, that makes them engaging, compelling, or as in the case of Slumdog, unforgettable.