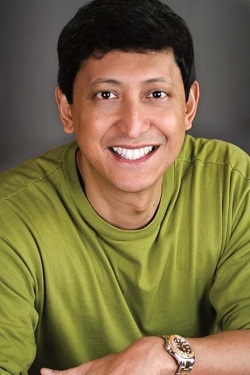 Among the Indian stand-up comics who have become household names, Dan Nainan brings a different kind of flavor to the comedy table. Born in Bloomington, Indiana, to parents of Indian and Japanese descent, Nainan is successful on the comedy circuit, where he has carved out a niche for himself as a comedian who does not make off-color jokes. From opening for comedy guru Russell Peters to landing television and movie roles, Nainan is clearly a star on the rise.
Recently, when he was in Atlanta to perform at a fundraiser, Nainan spoke to Khabar.

Did your mixed background amp your desire to be a comedian?
I don’t think my background drove me. I was abused in school when my peers used racial slurs. What usually drives artists, whether famous or wanting to be famous, is a tough past with their peers or a bad family situation. I have had a great family situation, so my peers drove me. Some people asked me if I was a class clown, and I definitely was not, but I was that kid who would say one thing in class and make everyone laugh. I definitely had a nasty wit.

How did you get into comedy?
When I worked at Intel, I was responsible for doing technology demonstrations to clients and I was absolutely terrified of public speaking. The thing with public speaking is that it only gets better the more you do it. So, I took comedy classes to help with public speaking and wound up loving comedy more than engineering.

When did you make the full transition into comedy?
Well, I worked as a Strategic Relations Manager [at Intel], and a position had come up that I wanted to advance to. After I got the promotion, I hated the new position. It was more of a desk job and I did not get to travel anymore or see the same people. So I decided to take the risk, because if I didn’t do it, I’d always beat myself up for not doing it.

Tell us about your choice to keep your act “clean.” What inspired that?
Well, if I said any swear words, my parents would kick my behind. I couldn’t do anything on a stage that I could not do in front of my parents. Also, once at a show in Gotham (New York), I met and had a conversation with Jerry Seinfeld. Everyone was saying, “Oh no, you cannot talk to him,” but I had the guts and I asked him, “Jerry, do you have any advice for beginner comedians?” He advised that “you should work clean; you will work everywhere.” He was right. And I do so many charity galas, corporate functions that using profanity just would not sell.

What are some of your ultimate goals?
Any comedian wants to get into acting. We all want sitcoms because TV reaches so many people in one instant.

What’s your ideal sitcom or television show?
I am pitching a show on following a comedian trying to make it big. Document hotel stays, club acts, flying everywhere. The irony behind this is also that if you have a show made about your attempts to make it big, you technically already have.

What was it like performing at the 2008 Democratic National Convention in Denver?
It was amazing. The energy of that arena was so high, but the downside was that I actually did not get to see [then Senator] Obama speak because I had to fly out to Seattle. I also got to perform at three [presidential] inaugural events. Obama did not see me, but his sister did and she loved it.

You said earlier that comedians like to venture into acting. You’ve worked in some major films. What was it like to work on The Last Airbender?
I filmed for 16 days and got to hang out with M. Night Shyamalan. It was just absolutely cool.

What is a question you seem to get a lot?
“Why aren’t there more South Asians on television?” The natural assumption is that the industry is racist, but actually there is a shortage! For The Last Airbender, they wanted 300 Indian men for a scene. Where are you going to find 300 unemployed Indian guys?! They all have jobs or are in school. The truth is that every agent, right now, is looking for middle-aged South Asian men? it is a very high demand! South Asians and East Asians are very much in demand, but these are also the cultures where parents want the children to have a “respectable job.”

What is something you would want readers to know about you?
I play five musical instruments and I have a secret desire to have a band, do a comedy show in a huge arena, and open for myself.