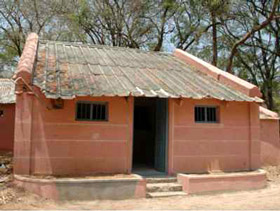 Those pride-inducing words are woven into the fabric of Indian patriotism. Both the lilt and the lyrics of the national anthem have made it perhaps the first and foremost expression of such pride for Indians.

Though this Bengali invocation had been written in 1911 and sung that year in a session of the Indian National Congress in Calcutta, it had remained largely confined to the pages of the Arya Samaj journal, Tatva Bodha Prakasika, of which Rabindranath Tagore was the editor.

(Above) The dilapitated cottage at the Besant Theosophical College in Madanapalle, Andhra Pradesh, where  Tagore is said to have written the first English translation of “Jana Gana Mana.” 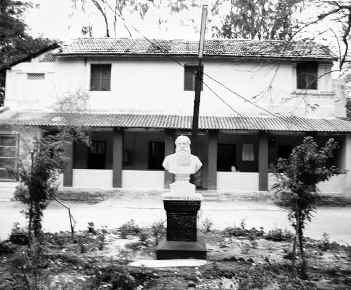 (Left) The courtyard in Madanapalle where "Jana Gana Mana" was first sung by Tagore and a group of students in 1919.

It was at the Besant Theosophical College in Andhra Pradesh in 1919 that Tagore and a group of students first sang out “Jaya hai, Jaya hai,” the concluding crescendo of the anthem in unison, a song that reverberated across the campus. Later Tagore wrote the English translation and the score, which is today displayed in the archives of the College. At that time it was called the “Morning Song of India.”

Here are some fascinating tidbits surrounding this dear and revered verse.

There is a perpetuated myth that Rabindranath Tagore wrote this song for the British monarch.
Tagore refutes this by writing, “In 1911 a certain high official in His Majesty’s service, who was also my friend, had requested that I write a song of felicitation towards the Emperor. The request simply amazed me. It caused a great stir in my heart. In response to that great mental turmoil, I pronounced the victory in Jana Gana Mana of that Bhagya Vidhata (the one to determine the destiny) of India who has age after age held steadfast the reins of India’s chariot through rise and fall, through the straight path and the curved. That Lord of Destiny, that Reader of the Collective Mind of India, that Perennial Guide, could never be George V, George VI, or any other George. Even my official friend understood this about the song. After all, even if his admiration for the crown was excessive, he was not lacking in simple common sense.”

At the Calcutta Congress session which began on December 26, 1911, the second day was apparently devoted entirely to welcoming King George V. “Jana Gana Mana” was sung on this occasion. Thereafter, some newspaper reports claimed that it was in honor of King George V. Since Tagore did not immediately refute the allegation, the perception spread that the song was a eulogy to the monarchy.

The Hindi version
Although he was instrumental in choosing “Jana Gana Mana” as the Qaumi Tarana (National Anthem) of the Provisional Government of Free India in Singapore in October 1943, Netaji Subhas Chandra Bose did not, however, like the fact that the song was in Sanskritized Bengali. So he commissioned a free translation in Hindustani. The translation, “Subh Sukh Chain,” was written by Captain Abid Ali, and its score composed by Captain Ram Singh Thakur, head of the Indian National Army’s music division. He was best known for his rousing classic, “Qadam barhai ja, khushi ke geet gai ja.” Netaji wanted to make “Jana Gana Mana” a martial tune, that soldiers of the Indian National Army could march to, like “Qadam barhai ja.”

Even though “Subh Sukh Chain” is considered a Hindi version of the national anthem, its meaning varies from the latter and it is, therefore, not a true translation.

The national anthem: born in exile, in Germany
Netaji Subhas Chandra Bose went to Germany in April 1941 and setup the Free India Centre. It had a flag similar to the present day Indian Tricolor but with a springing tiger in the middle. He also introduced “Jai Hind” as an Indian form of addressing each other. The only thing missing was a national anthem. Netaji called a meeting and discussed several options and ultimately decided that “Jana Gana Mana” should be the national anthem of Free India. There were no notations available, so Dr. Ambik Majumdar, who was well versed in musical notations, wrote the notations to the song and another Indian, a Dr. Mukherjee, played it on the piano for Netaji’s approval. The final version was then given to Dr Eigel Kruettge, the conductor of the Radio Symphony Orchestra of Hamburg, who made some minor changes to the notation for the orchestra. This is the version that is valid today.

On the 11th of September 1942, the Radio Symphony Orchestra of Hamburg played the national anthems of Germany and the Free India Centre. This was the birth of “Jana Gana Mana” as the national anthem of independent India. Mr N. G. Ganpulay, a close associate of Netaji and an active member of the Free India Centre, recorded the performance on tape. After his death, this tape was handed over to All India Radio, which broadcast a program in 1980 called “National Anthem Born in Exile.”

Is it compulsory to join with the singing of the national anthem in public functions?
In July 1985 in the state of Kerala, some of the Jehovah’s Witnesses children were expelled from school under the instructions of Deputy Inspector of Schools for having refused to sing the national anthem, as it was against the tenets of the religious group. Even though they desisted from actually singing, they used to stand up in respectful silence daily, during the morning assembly when the national anthem was sung. A Commission was appointed and it reported that the children were “law abiding” and that they showed no disrespect to the national anthem. However, under the instructions of Deputy Inspector, the Head Mistress expelled the appellants from school from July 26, 1985 and the Kerala High Court supported her decision.

A parent, V. J. Emmanuel, appealed to the Supreme Court of India for legal remedy. On August 11, 1986, the Supreme Court overruled the Kerala High Court, and directed the respondent authorities to readmit the children into the school. The decision went on to add: “We may at once say that there is no provision of law which obliges anyone to sing the national anthem nor do we think that it is disrespectful to the national anthem if a person stands up respectfully, when the national anthem is sung, and does not join the singing. Our tradition teaches tolerance, our philosophy preaches tolerance, our Constitution practices tolerance, let us not dilute it.” 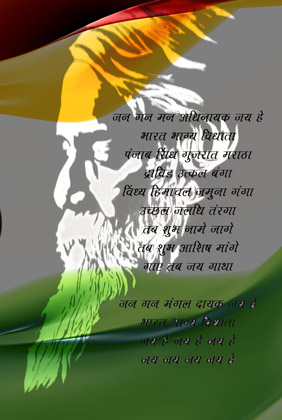 Translation
Thou art the ruler of the minds of all people,
dispenser of India’s destiny.
Thy name rouses the hearts of Punjab, Sind, Gujarat and Maratha,
of the Dravida and Orissa and Bengal;
It echoes in the hills of the Vindhyas and Himalayas,
mingles in the music of Yamuna and Ganga,
and is chanted by the waves of the Indian Sea.
They pray for thy blessings and sing thy praise.
The saving of all people waits in thy hand,
thou dispenser of India’s destiny,
Victory, victory, victory to thee.