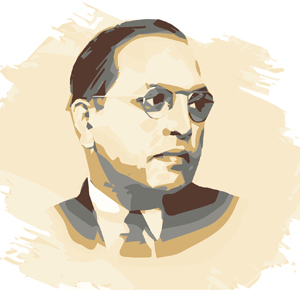 In a new biography of Ambedkar, Shashi Tharoor gets a measure of the constitutionalist and nation-builder, contending that an honest survey of Ambedkar’s life and its impact needs to also look at those faults for which he can be legitimately criticized without taking away from his greatness.

It is difficult today to imagine the scale of what Babasaheb Ambedkar accomplished. To be born into an “untouchable” family in 1891, and that too as the fourteenth and last child of a poor Mahar subedar in an army cantonment, would normally have guaranteed a life of neglect, poverty, and discrimination. Not only did Ambedkar rise above the circumstances of his birth, but he achieved a level of success that would have been spectacular even for a child of privilege.

One of the first Dalits ever to enter an Indian college, he became a professor (at the prestigious Sydenham College) and a principal (of no less an institution than Bombay’s Government Law College). One of the earliest Indian students in the United States, he earn-ed multiple doctorates from Colum-bia University and the University of London in economics, politics, and law. An heir to millennia of discrimination, he was admitted to the bar in London and became “India’s James Madison” as the chair of the Constitution Drafting Committee.

The son of illiterates, he wrote a remarkable number of books whose content and range testify to an eclectic mind and a sharp, if provocative, intellect. An insignificant infant scrabbling in the dust of Mhow in 1891 became the first law minister of a free India in the most impressive cabinet ever assembled in New Delhi.

Whereas some of those who seek to stand on Ambedkar’s shoulders today acknowledge his role in fighting discrimination against Dalits, and others honor his Constitution-making, they do not engage with the totality of his political and economic vision. Ambedkar’s concerns and doubts about Indian democracy, his contempt for Hindu majoritarianism, and his leftist view of political economy and labor rights are usually conveniently overlooked by his professed admirers. They prefer instead to do exactly what he warned against—to worship him as an idol, an act of “bhakti” rather than the critical engagement he might have welcomed.

Reviewing Ambedkar’s colossal achievements requires us to neither restrict him to his role as the great emancipator of India’s Dalits, nor to glorify him as a saint above criticism, but rather to embrace his life and his ideas as a whole (including some 17,500- odd pages of Ambedkar’s writings and speeches), the activism and the politics, the triumphs and the failures that marked his extraordinary impact on India’s public consciousness.

But an honest survey of Ambedkar’s life and impact must look at the flaws in his record as well.

There are four areas on which Ambedkar can legitimately be faulted. The first was his blind spot about Scheduled Tribes who deserved his support as “others” who were ostracized by Indian society—just as Dalits were—but whom he tended to regard dismissively as “savages” in need of “civilizing.” While discussing the issue of proportionate representation, Ambedkar is patronizing at best and offensive at worst: “My proposals do not cover the Aboriginal Tribes although they are larger in number than the Sikhs, Anglo-Indians, Indian Christians and Parsees. . . . [T]he Aboriginal Tribes have not as yet developed any political sense to make the best use of their political opportunities and they may easily become mere instruments in the hands either of a majority or a minority… . The proper thing to do for these backward communities is to establish a Statutory Commission to administer what are now called the ‘excluded areas’ on the same basis as was done in the case of the South African Constitution.”

The very idea of a Dalit leader prescribing the confinement of other deprived Indian citizens to Bantustans is cringeworthy; but it is made worse by Ambedkar echoing the very language he objected to in Gandhi when the Mahatma argued that the untouchables had not yet developed the political sense to use the vote, let alone make use of separate electorates that Ambedkar had demanded. It demeans Ambedkar to have spoken with language bordering on prejudice and racism about the Adivasi people.

A second criticism of Ambedkar relates to what Bhikhu Parekh calls his “quasi-Manichaean” view of Hinduism and Hindu society. Ambedkar’s language about Hindus and Hinduism is too sweepingly scathing: 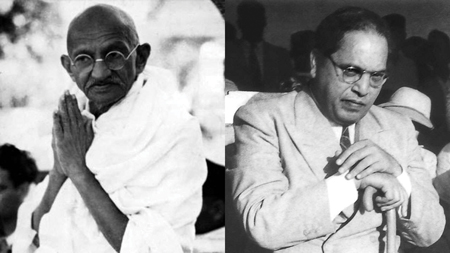 “Hindus are a . . . race of pygmies and dwarfs, stunted in stature and wanting in stamina. It is a nation 9/10ths of which is declared to be unfit for military service. This shows that the Caste System does not embody the eugenics of modern scientists. It is a social system which embodies the arrogance and selfishness of a perverse section of the Hindus who were superior enough in social status to set it in fashion and who had authority to force it on their inferiors.”

Equally savage was his declaration: “There can be a better or a worse Hindu. But a good Hindu there cannot be.”

But there were many Hindus whose lives, beliefs, and conduct did not conform to the Ambedkar stereotype; several who rejected caste and refused to respect caste rules in their personal lives; and many others who reached across caste divides to support Ambedkar and the Dalit cause. His sweeping denunciations of Hinduism left no room to admit such Hindus, nor the Hinduism of spiritual enquiry and philosophical debate, nor the Hinduism of the Bhakti movement, of Chokhamela and Kabir and Ramdas. The philosophy of “acceptance of difference” preached by Vivekananda; Adi Shankara’s acknowledgment that the Atman in a Chandala (a Dalit) is no different from the Atman in a Brahmin; the eclectic, pluralist Hinduism practiced differently in millions of Hindu homes—all these have no place in Ambedkar’s blanket denunciations of Hinduism. It can be argued that he was denouncing Hindu society, not the Hindu faith, but in fact, Ambedkar conflated the two—attributing the ills of Hindu society (hierarchical discrimination in particular) to the religion that in his view sanctified these ills, and thereby damning the entire faith in the process.

Such a black-and-white dismissal of a great religion was intellectually unworthy; too unsubtle for a man of otherwise rigorous intellect.

The third criticism relates to his clash with Gandhi—not his disagreement with the Mahatma, which he was perfectly entitled to have, but the ungraciousness of his manner in expressing it, including even after Gandhi’s death. Ambedkar cannot be faulted for honestly disagreeing with Gandhi on varnash¬rama in Hinduism, the political representation of the Depressed Classes, incompatible economic philosophies, “village India,” and the role of the state in empowering the underclass, all of which were issues on which the two stood poles apart.

All these are legitimate grounds for disagreement and debate. But Ambedkar’s bitterness and acrimony towards Gandhi, denouncing him in two books— with the titles Mr. Gandhi and the Emancipation of the Untouchables and What Congress and Gandhi Have Done to the Untouchables—should have been beneath a man of his stature.

Ambedkar’s hostility stands in contrast to Gandhi’s extensive record of striving for the abolition of untouchability and his overt expressions of respect for the Dalit leader. In a letter to Ambedkar dated August 6, 1944, Gandhi acknowledged their “different views” and the fact that “we see things from different angles,” but sought engagement nonetheless: “I would love to find a meeting ground between us.” With great humility, the Mahatma went on: “I must admit my failure to come nearer to you. If you can show me a way to a common meeting ground between us, I would like to see it.” But Ambedkar could not rise above his antagonism, quoting Gandhi’s view on caste with what even an admirer admits was “venomous disdain and contempt.”

The fourth and final criticism that must be aired is of Ambedkar’s statism—his absolute faith in the institutions and mechanisms of a strong central government to bring about the empowerment of the Dalits, to the exclusion of the moral and spiritual reforms that Gandhi had sought, and without heed to the need to bring people along with him in the adventure of changing time-old traditions and practices. Ambedkar saw the state as an instrument to transform society, using the coercive instrument of the law; the state, for him, was the agent of enlightenment, whereas Indian society was regressive and backward. His disdain for village India made him a centralizer, directing top-down transformation to overcome the prejudices and hidebound ways of the ossified villages.

The image of Ambedkar, in his suit and tie, issuing “progressive” modern diktats to ignorant dhoti-clad bigots covered in the dust and grime of their rural backwardness, is not a reassuring one, evoking the authoritarian fantasies of other modernizing autocracies, rather than the evolutionary change, anchored in local realities, that a democracy requires for its development. Ambedkar once even suggested that the best way to summarily eradicate the caste system and untouchability was if India could produce an Atatürk or a Mussolini. It was this kind of thinking that lay behind his proposals to get the state to regulate the theology and practice of the Hindu religion, an appalling idea that reveals the extent to which he allowed his obsession with annihilating caste to erode his better judgement.

And yet none of these criticisms can vitiate the scale of his achievements. They are the human flaws of a driven human being, animated by passion and outrage, who overcame overwhelming odds to expand the realm of the possible for his people. Even death neither stopped his prolific output nor ended his influence; he has grown ever larger in the national imagination since.

(This is an edited excerpt from Ambedkar: A Life by Shashi Tharoor)

Dr. Shashi Tharoor is a third-term MP for Thiruvananthapuram and an award-winning author of 22 books, most recently The Battle of Belonging (Aleph). He tweets @ShashiTharoor. This article was originally published in The Hindu. Re-printed with permission from Dr. Tharoor.