Home > Magazine > Features > Commentary: Is There Hope for Universalism?

Commentary: Is There Hope for Universalism? 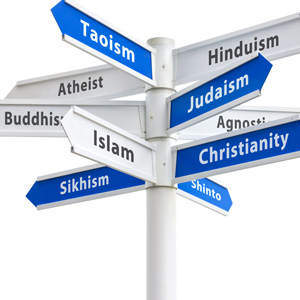 Every major religion in the world preaches values of tolerance, love, and peace. Yet history is a long, woeful tale of bloodshed, bigotry, and lust for power. Does universalism—a philosophy of shared ethical and religious concepts—hold the answer to mankind’s misery?

At the outset I want to make clear that I am neither a philosopher nor a religious expert. I make only a humble effort venturing into this complicated subject. In the last 50 years the world has seen a leapfrog jump in two areas, technology and politico-religion, if I may use that word. Politics and religion, instead of running in parallel and independent of each other, have merged or crossed in several parts of the world. This, I believe, is the root cause of the insecurity and fear we are experiencing. Advances in technology have made life more mobile, comfortable, and faster. On the other hand, destruction of property, murders, and suicide are in the headlines almost every day.

First, let us consider universalism, which refers to religious, ethical, and psychological concepts with universal application. The term was believed to have been used by Plato in the 4th century BC. The belief in one universal religion has been a very influential concept in Western thought.

We see universalism in ancient Hindu sacred texts such as the Rigveda and Upanishads. The Rigveda states, “Ekam sat vipra bahudha vadanti”—To what is one, sages give many names. Swami Vivekananda said, “We believe not only in an unlimited tolerance, but we accept all religions.” This is spoken by all modern Hindu philosophers in their discourses.

Anyone reading the Quran knows that Islam is truly universal. After Mohammed founded the Muslim religion in the 7th century, the Caliphate kings expanded Islam into most of the Middle East, parts of China, Russia, and Indochina. Akbar, the powerful Mughal emperor, instead of imposing the Muslim religion on the population, emphasized diverse forms of religious behavior. He joined his wife in practicing Hindu festivals. He even tried to establish a universal faith, Din-i-Ilahi, drawing on different religious traditions in the country.

Buddhism, which originated in India, did not use forceful methods. King Asoka, who was instrumental in expanding Buddhism, became so dejected after seeing the bloodshed in his last battle that he renounced war. Other faiths—Jainism, Judaism, Sikhism, Confucianism, etc.—call for religious tolerance.

There were wars in the medieval period based on religious differences, such as the Crusades, German Peasants’ war, French religious war, the Thirty and Eighty year wars, followed by a time of peace during the Industrial Revolution. American writers and philosophers of the 19th century, Emerson and Thoreau, drawing inspiration from the Bhagawad Gita, put forth the philosophy of nonviolence, self-reliance, and religious tolerance, ideas which influenced American politics. Both Mahatma Gandhi and Martin Luther King credited these American writers for their nonviolent methods.

The 1893 Parliament of Religions stood as one of the great expressions of hope for increased cooperation between adherents of the world religions, as representatives championed a world civilization with shared religious values as its core. Swami Vivekananda spoke at this gathering in Chicago. One would have thought with this background, and advances in information technology and economic interdependence, a new emphasis on diversity should have been evident in our modern age.

Unfortunately, 70 years ago, the British divided India based on religion, culminating in a war between India and Pakistan, still unresolved. Catholics and Protestants fought in Ireland, also hinged on religious differences. The Middle East conflict took center stage from 1967 and became a menace to the world’s peace and economy, with no end in sight even today.

In the name of religion, billions of dollars’ worth of property is destroyed and thousands are killed. Murder and suicide take the lives of hundreds of people. The nations of the world are spending trillions of dollars to cope with the challenges of conflicts, terrorism, and to “maintain strength.” The only solution I see is for religious leaders to set aside fundamental and pure religious ideas, embrace ‘universalism,’ follow the tenets of love, and shun hatred.

Ramachandra Reddy, a philanthropist based in Augusta, Georgia, is an engineer and entrepreneur who works in energy conservation. Long active in the local community, Reddy was appointed to the Georgia Medical Center Authority, and he’s a founding trustee of the Hindu Temple in Augusta.