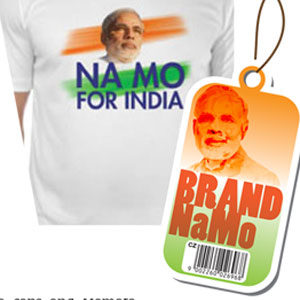 “We have failed to present Brand India in front of the world because of some self-created problems,” Narendra Modi told a market summit in Mumbai recently.

Modi himself clearly has no such problems. He is a textbook case study of how to sell a brand—in this case, the brand being himself. The Times of India reports that a NaMo store is opening in an upmarket mall in Ahmedabad to sell NaMoMantra apparel, books, and other merchandise. A boutique in Ahmedabad has registered a trademark for those half-sleeve kurtas Modi favors. It’s now eyeing an international trademark for the brand. Indian Express adds that at least 30,000 made-in-Surat long sleeved kurtas with the words NaMo Mantra embroidered on them were sent to Patna’s Gandhi Maidan for Modi’s October 27 Hunkar (lion’s roar) Rally.

Move over Lion King. Modi Lion is here. That’s not a joke. Modi Lion is, in fact, an upcoming brand planning to sell toys to children. Even his most ardent fans could not have foreseen this transformation—from Loha Purush (Iron Man) to cuddly toy.

Indian politics is no stranger to cultish behavior. Politicians from Indira Gandhi to N. T. Rama Rao have enthusiastically promoted their larger-than-life personas. While Mahatma Gandhi’s loin-cloth, so derided by Winston Churchill, didn’t quite take off as a fashion craze, we do have the Gandhi topi and the Nehru jacket.

But in post-liberalization India our passion for political demigods is only matched by our crazed brandconsciousness. This cottage industry of memorabilia springing up around Modi, both in mithai shops with Modi pedas and in upscale malls, is really a comment on the commodification of our politics where the man and his message can be merchandised. And the sales figures are regarded as a mark of his political salability.

As ad man Santosh Desai writes, brands such as Brand India are sexy because “it allows for the translation of a large, abstract concept into an ownable and easy-to-consume confection.” This is Disney-fication of politics as opposed to the deification of political leaders that we have been used to. That was an old-school kind of branding imposed with the heavy hand of the state. It meant Mayawati’s giant statues in public parks. Or endless government schemes bearing the names of the Nehru-Gandhi family from the Rajiv Gandhi Grameen Vidyutikaran Yojana to the Indira Awaas Yojana.

Modi has moved us a step beyond the usual markers of political branding. This is a different kind of branding, a more market-savvy, people-friendly one. It’s closer in spirit to those I Am Anna caps and Mamata Banerjee’s paintings that sell for lakhs in Kolkata. But those paintings are bought in galleries by industrialists. And there’s no line of Didi-wear clothes or I Am Anna t-shirts being peddled in malls anywhere. That is why the commodification of Modi is different, both in scale and scope, from what we are used to in Indian politics.

In a global sense, such commodification is not new. There’s plenty of Obama-bilia around from the Yes Pecan ice cream flavor to the iconic Obama Hope t-shirts. But whereas there can often be a playfulness about the memorabilia-zation of politicians, we are deadly earnest about it (that means we will not see Rahul “escape velocity” rockets or Mulayam pehlwan-dolls).

Turning a politician into a brand is certainly useful. Brand Modi becomes an act of reflection with the multiplying effect of a hall of mirrors. As Modi stands at the rally, beaming, waving to the crowd, the jubilant crowd gazes back at him draped in NaMo paraphernalia—Modi masks, Modi t-shirts, Modi kurtas. For his fans it’s like coming together in the hyper-reality of a theme park, a Disneyland of hope and optimism.

And Modi-haters will nod in recognition at the French philosopher Jean Baudrillard’s assessment of Disney: The whole Walt Disney philosophy eats out of your hand with these pretty little sentimental creatures in grey fur coats. For my own part, I believe that behind these smiling eyes there lurks a cold, ferocious beast fearfully stalking us.

Either way it is as if our feverish passion for politics and our insatiable hunger for brands have finally come together in common churn. And Narendra Modi has emerged from that manthan as an entity than can both sell and be sold. What better NaMoMantra can there be in the new India?

Formerly an expat in California, Sandip Roy is now based in Kolkata, where he is the culture editor for firstpost.com. This article first appeared there.