COVID-19  In-depth info for Indians in Atlanta/Georgia. Click here
Home > Magazine > Features > Commentary: Why the Voter May Already Be a Winner

Commentary: Why the Voter May Already Be a Winner 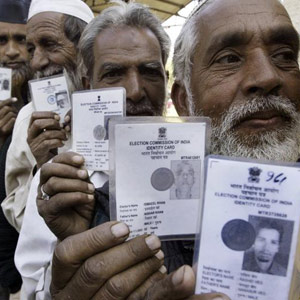 Many factors make the forthcoming Lok Sabha elections of 2014 different from earlier ones—and more advantageous for the voter.

The Lok Sabha elections in April and May 2014 may prove to be a watershed for Indian politics, and probably the Waterloo for quite a few Indian politicians. While individual fortunes may be made or marred, the one person who is sure to get a better deal from it all is the common man.

The pulls and pushes, particularly by the Congress, the Bhartiya Janata Party (BJP), and the Aam Aadmi Party (AAP) to project a new brand of governance can only help the Indian voter, as each party tries to best and sometimes emulate the others to win him over.

Factors such as the rise of Narendra Modi as the prime ministerial candidate of the BJP, and the bagging of 28 seats by AAP in the Delhi polls, have energized the masses. The nomination of Modi is perhaps a game changer for the 2014 campaigning. As he progressively talks about better governance and development, he seems to gain more and more empathy with his audience. The huge crowds at his rallies have disconcerted his opponents, to say the least. AAP surprised many by its sterling performance in Delhi. It performed extremely well because of its agenda of clean politics and good governance. However, with just a month of governance and with national ambitions, they are under extreme scrutiny and questioning by the media, public, and opposition. On the Congress front, while the party may yet come up with its own game plan, at least the talk and the thrust is again in favor of the common man. In a recent TV interview, Rahul Gandhi spoke about the pressing need to nominate clean and good candidates and about empowering people to improve our polity.

How could the voter benefit by this energized political landscape? AAP’s campaign in Delhi, with its emphasis on clean politicians, is sure to rub off on the other political parties. There’s a chance we may get a larger crop of clean politicians. Another example is AAP’s promise to end VIP culture in Delhi. No red beacons, escort vehicles, or long convoys. The CMs of a couple of other states have already followed suit and reduced their convoys. These are baby steps, but could grow into a trend that sees the reduction of wasteful government expenditure and more importantly change in the way the public perceives VIPs, and in turn how they treat the public.

With a plethora of promises, parties are now talking more of better governance and citizen-centric issues than in any earlier election. One small example is the possible increase of the quota of gas cylinders from 9 to 12 for each family. We saw Rahul Gandhi on TV asking for this of the PM during a recent Congress national meet. It may be a populist measure but for those with large families, it brings some relief.

Then there is the Indian media, which is now very active and vocal, and is robustly supplemented by the social media—Facebook, Twitter, YouTube, and such. Large numbers of prospective voters are accessing real-time news and opinions. Opinions are conveyed, formed, or sought in interactive broadcast forums. The biggest advantage of this deluge of news and opinions is that issues that really affect the common man are being widely highlighted. There is extensive reporting from all parts of the country and the internet has enabled people even in remote locations to convey their views and grievances. Consequently at the time of real decision-making in the polling booth, the voter may make a decision that helps himself the most. With a vigilant media exposing wrongdoings almost instantaneously, elections 2014 seem ready to throw up a more committed politician in response to a more alert voter.

The Election Commission of India is now an authority of which most Indians can be quite proud. As an autonomous, constitutionally established federal authority, it has increasingly enabled free and fair elections in the country. The appointment of T.N. Seshan as Chief Election Commissioner (CEC) back in 1991 reinvigorated the Election Commission. Bold and decisive, Seshan made huge corrections to the illegal manipulation of India’s electoral system. By cancelling elections or conducting repolls where improprieties had occurred, disciplining errant poll officers, and fighting for the right to deploy paramilitary forces in sensitive areas, Seshan forced candidates to take the Election Commission’s code of conduct seriously and strengthened its supervisory machinery. Successive CECs introduced improved procedures, technology, and practices that have ensured fair play in the electoral process. The introduction of EVMs—Electronic Voting Machines—has helped to reduce malpractices and improve the efficiency of the electoral process drastically. India is probably the only country that now carries out such a gargantuan polling exercise with EVMs. The voter will benefit from the fact that corrupt politicians, whom he has neither voted for nor cares for, will not be foisted upon him.

In the early 1990s, China’s leadership opened up the economy to foreign investment and market allocation. Political institutions were stabilized, and there was a generational shift from peasant revolutionaries to well-educated, professional technocrats. China has improved its infrastructure dramatically under these technocrats. In contrast, India has huge gaps in infrastructure and health care. With a crying need for better vision and implementation, can we copy some of the good steps taken by China? Soon, political parties will select and release their list of Lok Sabha candidates. With so much emphasis on good governance at election time, will they nominate engineers, doctors, lawyers, town planners, administrators, and even visionaries to provide a thrust for improving our towns and cities? With increased awareness and engagement of the masses, this is more likely than not.

Over the years, there have been multiple scams, much misuse of political power, high inflation, and an increasing shift away from the concerns of the common man. As political leaders and parties campaign for power and promise good governance and development, they will necessarily have to address issues that will make life better for the common man. If they work to meet poll promises we stand to gain. Otherwise the media, the opposition, and the general public will seek accountability from the victor for their poll promises. For the common man, the voter, could it be “heads I win, tails you lose”? Jai Ho!

Anand K. Gupta is a Pune, India based freelance who has written for the Free Press Journal, The Asian Age, and other media outlets.