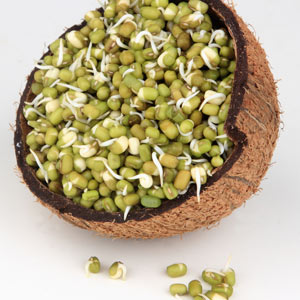 The long way can be therapeutic, learns the author, while contemplating the various ways of cooking a cherished family staple, the dried moong bean.

Somewhere in the vast scrolling feed of pop culture news, politics, and funny yet distracting animal videos, someone asked me a seemingly simple question: What does a seed mean? To me?

The inquirer was not a person of South Asian descent. To them, Indian cooking used far too many seeds to count; the mere idea inspired fear and trepidation, represented a maze of configuring nuances like tackling a 1,000-piece puzzle on a snowy day. The perplexing notion of determining the difference between black and yellow mustard seeds—or understanding the subtle difference between seeds of the Umbelliferae or carrot family: cumin, black cumin, coriander, dill, fennel, or caraway—just to name a couple of examples—was daunting!

Yet, seeds are an integral part of the Indian cuisine. Their individuality shines through dishes suggesting unique preferences, personalizations, signature twists. Those familiar with Indian cuisine can cook with the effortless finesse and dexterity of a neurosurgeon, and the nonchalance of a farm hand.

Nearly half my life was on a different continent, among people with my skin tone. Our family lives revolved around two things: mother’s cooking and my father’s stressful career in law enforcement. I was younger then, a child. The one ‘seed’ that elicited strong memories was the dried moong bean. This legume, essentially a seed, was on nearly every grocery list. It was not one in my mother’s masala dabba, her palette of flavors that allowed her to paint every dish in varied hues, but a pantry staple. If the moong bean supply was low, she thrust some money into my hand and I made an emergency run to the neighborhood grocer that evening, waited for him to measure out a kilo or two of the green bean, wrap it in a bag of recycled newspapers, and the new purchase quickly replenished the stock. When the supermarket came to our neighborhood, at thirteen, it was my job to stock the pantry and ensure we had, among other things, a kilo or two of the dried green moong beans.

As a child, I knew there were a few ways to cook it: my grandmother pressure cooked hers, my mother’s best friend pressure cooked them directly with rice and light seasoning. There are half a dozen easy ways to cook it. Yet, for decades I remained bewildered that mother always chose the one that was most tedious, most time consuming, and sadly, my least favorite preparation. She soaked the beans overnight. It would be two days before they became edible. Drained the next morning, she allowed them to sprout in a damp cheesecloth-lined sieve for another twenty-four hours, during which she prepared a spice paste of freshly grated and roasted coconut, onions, ginger, garlic, and other whole spices. When she was ready to cook them, she spent the time picking through them, removing unsprouted ones, rinsing away their green casing, and then combining the spice paste and the sprouted moong beans in a large pot, and allowing it to simmer for at least twenty minutes. She then served it for dinner with a side of her favorite phulka rotis and rice.

The sprouted moong bean and coconut stew for dinner invariably meant that the kids had spicy scrambled eggs in our lunch-boxes, our tiered metal tiffins. These tiffins would make their way through town to our school in little plastic lunch bags at the back of the tiffin carriers’ bicycle. The scrambled eggs would cool off into mounds of yellow and green, showing off specks of jalapeños and red onions. They were never my favorite.

As a child, the sprouted beans represented the cause of mother’s distraction, her many hours spent in the kitchen, and the reason my afternoon lunch was lackluster. When I started cooking for myself, I avoided cooking sprouted beans like the plague.

And while I spent time avoiding it, I also moved to the United States, chased a few careers, married, and started raising a family. I took on food writing because it fed my soul, uncovering my complicated relationships with food: food affected moods, composure, passions, reactions, health, and well-being, not just through its consumption, but through rituals that preceded its preparation.

As life became more complex, moong beans reentered our kitchen, a comforting reminder at first of my mother’s kitchen, and an easy handy staple form of vegetarian protein. I cooked it the simple way, pressure cooking the beans until they softened, replacing the freshly grated coconut with the convenient yet flavor-deprived frozen coconut from the ethnic store, or skipping the coconut completely. If I remembered, I stocked the pantry with coconut milk and used it in the stew. I sometimes altered the flavors with an additional tempering, a tadka, of mustard seeds, curry leaves, and asafetida.

Yet, every alteration deviated from the memory of the moong beans I remembered eating and resenting. I missed the fresh coconut from our farm, grating it with a sickle-shaped grater, or stealing a few morsels from whoever was working each half shell, the aroma of roasting the sweet fresh coconut with spices, pulverizing the amber colored mix into a paste, and returning it to the pot, to wait for the sprouted moong beans.

Until, that is, I had the opportunity to teach this dish to a Jewish couple who wanted to learn a healthy vegan protein dish in my tiny suburban kitchen in Atlanta, far away from my parents’ coconut farm in India or my mother’s kitchen within it. I wondered about which method I wanted to teach them: my mother’s— the original version—or mine? I felt like a cheater with shortcuts. Was I callously trading care for convenience?

Or did I really want to teach them an amalgamation of the two methods?

I measured the dried beans, washed, and soaked them, checked a few times that day to see their steady progression as the greenish casing of the beans cracked open to reveal the creamy white cotyledons. I admired the emerging roots and then gave them room to grow in a damp cheesecloth. When they showed promise, I added coconut milk to the grocery list, and on the day of our cooking lesson, I picked through the sprouted ones, looking for the ones that had not sprouted and rinsing away the green casings of the beans. We cooked them gently with the same care that mother had taught me and simplified the process with the coconut milk. My mother was visiting us. She was at that dinner. She liked the preparation.

I finally understood why my mother chose the long and complicated way of cooking them. It was therapeutic for her. She could distract herself from the stresses of the day, from things that were outside her control, and focus on those that she could. It was about seeking and finding.

As I worked through my preparation, I recognized the subtle meditative quality of preparing for the dish. As I cooked and taught our friends, I recognized that the evolution of process was helping create a new pristine memory. As we ate, I found myself relieved, not for a well-done dish that balanced the flavors well, or that I had my mother’s approval on the dish, but because somewhere in the amalgamation of two methods, of the old and new, I had found the balance of what satisfied my hunger: a combination of memory and flavor, of tradition and comfort.

Nandita Godbole is an author and food writer, whose latest title Not For You: Family Narratives of Denial & Comfort Foods was recently featured on NBC Asian America. 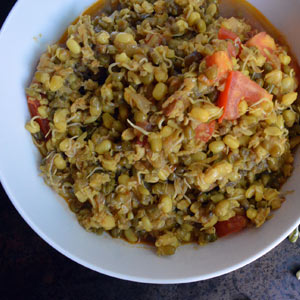 PRE-PREP
Soak the mung beans in about 2 cups of water overnight. Discard the water the next morning, rinse them out but don’t drain completely, cover the container with a moist towel or dishcloth and set aside for twenty four hours. The beans will sprout during this time. Just-sprouted beans are ideal for this recipe. Once sprouted, rinse them briefly and gently to remove any loose bean coverings. The beans are then ready for use.

METHOD
Heat the oil in a large saucepan. As it warms up, add the onions and sauté until lightly golden brown.
Then add the ginger and garlic paste and jalapeños if using any, and sauté until fragrant.
Add the whole green cardamom pods, cinnamon stick, and bay leaf, and sauté for 1 minute. Carefully add the turmeric, cayenne pepper powder, cumin powder, and coriander powder; give it a quick stir and remove from heat.
Add the coconut milk and blend with a hand-held blender until smooth; return to the stove. Allow this mixture to return to a low simmer, 2-5 minutes.
Now add the sprouted mung beans and gently mix until the spices coat them. Cover the pot lightly, allowing the steam to escape, and let this cook for about 8-10 minutes. Stir every few minutes to ensure even cooking and add water to ensure the beans do not stick to the pot.
As the beans continue to cook, season with salt, add the sugar and tomatoes, cover, and cook for another 3-5 minutes until the tomatoes soften.
Garnish with cilantro leaves. Serve hot with breads of choice, or with steamed rice for a well-balanced gluten free meal.