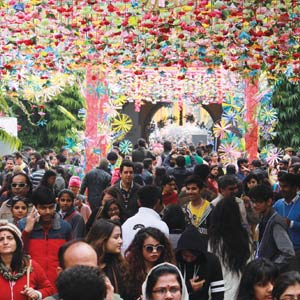 For one delirious week in January, the JAIPUR LITERATURE FESTIVAL is the most happening cultural event in India.

“Excited as a schoolgirl” about best sums up my state of being as we walk down the lane leading to Diggi Palace, whose gracious lawns have hosted the Jaipur Literature Festival for a full 10 years. Past security check, beneath an archway, and a cerulean arc of sky opens up, a lovely backdrop for a kaleidoscope of criss-crossing paper decorations—tiny brass bells, pinwheels, and a frenzy of flowers, their pinks, yellows, greens, and reds fluttering in mad abandon. So is this what a serious literary event is like, I wonder, in a happy daze, even as the surging crowd of visitors carries me along, wave-like, to my first venue, the Main Lawn. 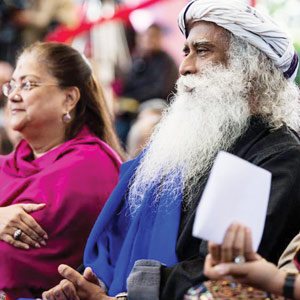 But serious is neither an appropriate nor sufficient adjective to encompass the JLF experience. The sheer magnitude of attendees—500,000, over a span of its five days—makes this the largest book festival in the world. The mela-like ambience (Time Out magazine neatly captured it as “James Joyce meets Monsoon Wedding”) that prevails in the crisp, sparkly air of a desert winter, offers a spread of delights for book lovers and intellectuals of every stripe. And curious or casual visitors, too. Where else, in one afternoon, can one imbibe the simple yet profound wisdom of Sadhguru, listen in on Tamil author Vaasanthi’s candid experience of writing former Tamil Nadu Chief Minister Jayalalithaa’s biography, and a mere half hour later, dive into “The Foreign Correspondents Club,” a riveting conversation among Mark Tully, Luke Harding, Madeleine O’Dea, and Mei Fong on the mostly unglamorous, often dangerous, and sometimes bizarre experiences of foreign correspondents? Even squeezed into the back rows of a 2,000-strong audience, there’s a sense of sitting in on an informal drawing-room chat among eminent personalities from the worlds of literature, film, journalism, and the arts. 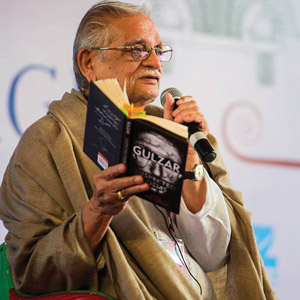 By Day Two, after long hours of standing and peering over the heads of packed crowds at the more popular events, I’ve learnt strategy to rest my aching feet—head to the venue of choice a good half hour ahead of time, hang out on the fringes of the ongoing program and lunge for the first vacant chair when people start leaving. A good thing, too, for seated under the lovely, ochre-and-red tented Char Bagh and listening to Gulzar reading irony-tinged lines from his new collection Suspected Poems was, in a word, sublime.

“Kohinoor,” my next choice of event, was a crackling ride through the history of the famous diamond. Festival codirector, author, and brilliant speaker William Dalrymple and his equally savvy co-author Anita Anand of the recently released book, Kohinoor, held the audience rapt with their sweeping view of the centuries, detailing the intrigues, betrayals, murder, and ill luck that the Kohinoor left in its wake. 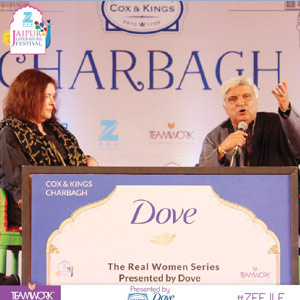 The veteran Javed Akhtar, doing what he does best: playing with words. (Photo: courtesy, JLF)

“If the denominator of your life is infinity, the value of your life is zero.” Thus spoke Devdutt Pattanaik, and the folks gathered under the Mughal Tent—students, tourists, corporate types, senior citizens, and silken ladies—were bug-eyed with fascination trying to keep up with his rapid-fire comparisons of Indian and Greek mythology. While Greek heroes evolve from ordinary men into larger-than-life superheroes, says Pattanaik, the protagonist in Hindu epics is the ultimate superstar, God himself, who descends into the avatar of an ordinary human to help resolve the problems of the world. And in case you’ve never understood why the appearance of Hindu gods defies logic (many arms, animal heads, a plethora of forms?), it’s to teach humility, he opines, to make us ego-ridden humans understand that nature is far too complex for our puny intellect. Ah, so now we know. No doubt, his new book, Greek Mythology, will be flying off the shelves, too, by the time you read this.

It’s got to be a Bollywood star who can pack ’em in like sardines. Perversely, I’d chosen not to attend the book launch of Rishi Kapoor’s tell-all, aptly titled Khullam Khulla. But sipping masala chai at the neighboring—and alas, thinly populated—venue, the full-throated roar of Rishi saab’s audience made it clear that the eminent literati around notwithstanding, nobody shines like a movie star in India.

Quite a bit of stardust adheres to Shashi Tharoor, clearly the personality every eager-beaver visitor had come to see at the event entitled “The Dishonourable Company: How the East India Company Took Over India.” Moderated by the indefatigable Dalrymple, the discussion with British historians offered different perspectives on the East India Company’s chokehold on one of the world’s great civilizations and how it came to be so. Despite the cameraman’s penchant for too-frequent projections on the large screen of Mr. Tharoor employing that famously casual flick of his hair, one nevertheless came away with new nuggets of knowledge about India’s colonial history. 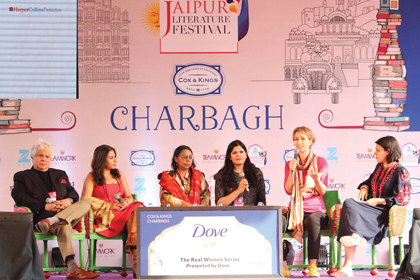 The festival is a symposium of thoughts and trends. Here’s a panel talk titled, “The Real Women Series.” (Photo: courtesy, JLF)

People-watching is, of course, one of the unexpected joys of JLF. Celeb-spotting from literary and media circles is a given (“Oh look, there’s Tavleen Singh, desperately searching for a chair!”). It’s clear though, that masses of visitors have little interest in anything remotely literary. Gaggles of Class 9 schoolkids (compulsorily bussed here, no doubt) sprawl on the trim, green lawns, chomping down on chhole-khulche, burgers, and pasta, while pashmina-toting aunties doze lightly through book readings during the golden afternoon hours, and more than a smattering of foreign visitors take in this mini-India on display rather bemusedly.

All too soon, my new, indigo block printed tote bag weighed down with book purchases, I trudge back from the dream universe of Diggi Palace into the manic traffic outside. Controversy, criticism, crowds, and endless cups of chai—not much seems to faze the Jaipur Lit Fest even as another year melts away. I know I’ll be back.

Poornima Narayanan is a freelance writer and editor based in New Delhi, India.