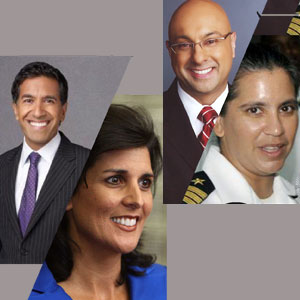 Indians are quick to attach labels imputing confused identities to other Indians raised outside the “homeland.” But the notion of an unbridgeable gap between “us” and “them” is ridiculous in today’s fast-changing world, writes the author.

American Born Confused Desi (ABCD), Canadian Born Confused Desi (CBCD), British Born Confused Desi (BBCD) and of course the ever popular “whitewash” and “coconut” for those regarded as being brown on the outside but white on the inside—there are as many names for them are there are for others of Indian origin, who were born or raised outside—Fiji Born Indians (FBI), and Confused American Desis (CAD), those still living in the “homeland” but choosing to follow a Western lifestyle. And of course there are those FOBs (Fresh-Off-the-Boat immigrants) who’re still clueless about the culture they’ve chosen to be part of.

All of these names are clever, distinct and equally overblown in their own special ways yet ultimately link to a common theme: the stereotyping and failure of acceptance of Indians by Indians.

The answer may be found in the one common place everyone knows yet few seldom turn to for direction— ourselves. Portrayed in films as severely Westernized, labeled by “traditional” South Asians as culturally inept, the ABCDs of the world are often regarded as a generation that is subpar to the last simply because of where they were born, what language they speak and how they choose to live their lives—as either traditional-to-a-“t” or as anything but, with no room in the middle for compromise.

However, in today’s time, the very idea that a strong, continuous cultural gap exists between nativeborn traditional South Asians and those born elsewhere is amusing to say the least, if not outright dull altogether. A quick glance at the modern world would show that cultures (like people) are constantly evolving with the times, honoring the old by embracing the new and combining the two to preserve and improve upon a sacred past.

Proof of such change can be found in the examples set by accomplished Indians helping to shape the world today, a few of whom are noted below:

Dr. Sanjay Gupta:
CNN Chief Medical Correspondent
An American neurosurgeon, published writer, and former White House Fellow admired by the likes of Senator Clinton and President Obama, CNN’s lead medical man started out with humble roots as a native of Novi, Michigan. While a qualified “ABCD” by birth, Gupta seemed to embrace both cultures as he joined college clubs, got married in a Hindu wedding and still speaks Hindi to this day.

Gov. Nikki Haley:
Governor of South Carolina
Born to Sikh Indian immigrants in Bamberg, South Carolina, Nikki Randhawa Haley took to the political stage following a career in accounting and working in the family clothing store business, helping to expand it into a multimillion dollar operation. While raised as a Sikh, Haley identifies herself as a Christian but participated in both Sikh gurdwara and Methodist church wedding ceremonies with her husband, Army National Guard officer Michael Haley. Today, she serves as the 116th governor of South Carolina, the second Indian-American governor in the country (next to Louisiana Gov. Bobby Jindal) and attends both Methodist and Sikh religious services out of respect for her family’s culture.

Ali Velshi:
CNN Chief Business Correspondent
Born in Kenya, raised in Canada and becoming an award-winning reporter in the States, Velshi chose to remain true to his cultural roots throughout his life—becoming a staunch supporter of the Muslim community through his efforts in defending the idea of building a mosque near Ground Zero in New York City. To this day he is not shy to acknowledge his background as an Ismaili Muslim while also thriving in his career as host of CNN’s “Your Money.”

Commander Shanti Sethi:
Commander, USS Decatur (DDG-73)
The 12th female commander in the U.S. Navy, Commander Sethi is a woman who chose to lead a life far from convention. Born in Reno, Nevada, to parents who later divorced when she was just five years old, this 4-foot-11-native of Silicon Valley, California, grew up without the pressure of pursuing an “acceptable” career field outlined by traditional standards, and seemed to make the most of this with her choice to attend the Norwich military academy and graduate as a naval officer in 1994. While Sethi has openly admitted that she was not very familiar with certain aspects of her Indian culture, this certainly has not stopped her from bringing inspiration to her community and setting an example for Indians as well as women everywhere to follow. On March 16, 2011, Commander Sethi made history once again when she became the first female commander of a U.S. Naval warship to visit India when her destroyer pulled into Chennai for a short visit, during which she took time to speak to women at the U.S. Consulate. Her visit can now be seen on YouTube under “Women Achievers: Never let anyone underestimate you.”

In addition to the above, there are scores of other desis who have found their own ways of honoring our culture by sharing it with the rest of the world. For example, in June 2011 Captain Pratima Dharm, a New Delhi native, made history in the United States Army when she became the first ever Hindu Chaplain in the U.S. military, utilizing the teachings of the Hindu deity Krishna and the Bhagavad Gita to help motivate and inspire soldiers in their time of need.

Although some may consider these five as “cultural washouts” through and through, it is doubtful any of them ever saw themselves as such growing up. While not all followed family tradition to the letter, they stand as leading examples of the next generation of desis coming of age in the world today. Their collective work ethics, personal drive, and determination to make the very best of their lives, regardless of cultural conformity, pay homage to the idea that it is possible to achieve great success in life by embracing Western ideals while still adhering to the core South Asian norms of respecting family roots, and working hard to achieve goals and set an example for others to follow.

In hindsight, looking back on the question of exactly what does it mean to be a good “Indian,” “Muslim,” “Sikh,” “American,” “Canadian,” and so forth, one could easily see that qualifications for all of the above are essentially one and the same—to have faith, work hard, respect family, and strive to honor the past by helping to build a better, brighter future.

Jason Ram is a native of California with cultural roots from the Fiji Islands. He currently serves as a Second Lieutenant in the United States Air Force, and is a freelance journalist with experience as columnist, news editor, and executive editor for various news, print, and online publications.