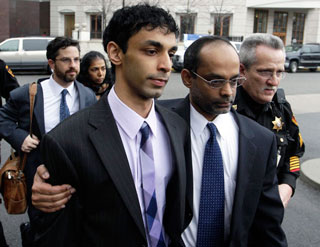 The trial of Dharun Ravi quickly became bigger than either Ravi or Clementi. It became a “message” trial, one that was about a larger national conversation on gay bullying. Even President Obama weighed in on the issue, posting a video message saying the suicides of young gay people break his heart.

It’s not because there was bias against Indians that came out in the courtroom. It was not because his ethnicity was put on trial, that he became some kind of Exhibit A for an affluent but socially conservative immigrant community. Dharun Ravi did not take a plea bargain in December that would have avoided jail time altogether and put him on probation with 600 hours of community service. Most Americans in his position would have jumped at it. But Ravi is not an American citizen. Born in India, raised most of his life in the U.S. but still an Indian citizen, he was afraid he would be deported to India.

He gambled he could prove to a jury that he was not some gay-bashing bigot, that the webcam he secretly turned on his roommate Tyler Clementi was a college prank that went tragically wrong. He lost his gamble and now faces up to 10 years in prison and deportation. It’s a tragedy all around, Indian-American journalist Arthur Pais told NorthJersey.com. “One family lost a son and the other family has to deal with a loss of their reputation and no one knows what the future holds for this young man.”

The trial of Dharun Ravi quickly became bigger than either Ravi or Clementi. It became a “message” trial, one that was about a larger national conversation on gay bullying. Even President Obama weighed in on the issue, posting a video message saying the suicides of young gay people break his heart. “You are not alone. You didn’t do anything wrong. You didn’t do anything to deserve being bullied,” Obama said.

No one knows whether Tyler Clementi jumped off the George Washington Bridge because of what Dharun Ravi did. Ravi was not on trial for the death of Clementi. He was on trial for the invasion of his privacy.

The case did become the poster case for gay bullying, a cruelty that is just often dismissed as “kids will be kids,” nothing very serious. “We do believe this verdict sends the important message that a ‘kids will be kids’ defense is no excuse to bully another student,” Steven Goldstein, the chair of New Jersey-based LGBT organization, Garden State Equality, said in a statement.

But as Ravi’s missed chance at a plea bargain shows, it was also a case about America’s broken immigration system.

Loeun Lun fired a gun in the air as a teenager to protect himself from a gang attack. But he ended up being deported to Cambodia, a country he had left as a child. By then he had his own family in America, a wife and two daughters. In the documentary Sentenced Home, we see him building a tiny shack in the middle of rice paddies in Cambodia.

Like many of his neighbors KK fell into drugs and gangs while growing up on the hard-scrabble streets of a poor neighborhood in Long Beach, California. But his gang-mates were full-fledged Americans. He had been born in a Thai refugee camp. In 2004 he was deported to Cambodia, the very country his parents had once fled.

Carlos Pacheco came to the U.S. from Portugal with a green card when he was six. He was no model citizen. He had been booked for assaulting his wife Maria. He had also shoplifted, stolen a video game worth $10, two packs of Tylenol cold medicine and four packs of cigarettes. The sum total of his thefts came to $93.50. That was enough to put him on the road to deportation.

Then there are all those other teenagers who committed no crime other than being brought to America as a child and growing up in the country without papers. By some estimates there are a million of those young people who live in a kind of immigration no-man’s land, afraid that a missing taillight on their car can send them spiraling into deportation proceedings.

Ravi, Lun, Pacheco are different from them. They were convicted of crimes, big and small. The Illegal Immigration Reform and Immigrant Responsibility Act of 1996 demands that all non-citizens who commit felonies must be deported. That can be murder, or shoplifting or urinating in public. Judicial discretion was pretty much eliminated. The immigration system does not give anyone a second chance for being a dumb teenager. You are punished first for the crime you committed. Then you are punished for the accident of your birthplace.

As a juror in this case admitted, no one knows what actually went through Dharun Ravi’s mind when he spied on his roommate and tried to turn it into a peep-show for all his friends. But we can probably be certain of one thing. Dharun Ravi surely never imagined that that webcam could become a one-way ticket to his own deportation.

[Sandip Roy is the culture editor of Firstpost.com, where this commentary originally appeared. Reprinted with permission.]