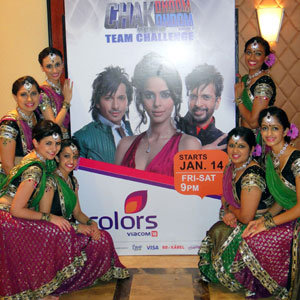 It started with 5000 teams auditioning across India, London, Dubai and the United States for a place in Chak Dhoom Dhoom, the much-watched dance talent show on Aapka Colors TV in India. When it all ended for Atlanta’s Kruti Dance Academy, they had managed to make it all the way to the top nine teams standing—before they were eliminated by the audience vote, despite being the judges’ favorites. En route, they dazzled with seven stunning performances on Indian national TV, prompting the judges to comment on their command of classical dance, which seemed to them more impressive than that of the local teams from India.

For the seven-member Kruti team, the excitement of the initial selection from among so many teams was followed by the euphoria of  earning a place among the top 32 teams in the final audition. It was the start of a thrilling journey that included accomplishment, success and self-discovery.

The girls—Shemoni Sheth, Shreya Shah, Keshal Patel, Jaimisha Patel, Shivani Gandhi, Mili Shah and Bianca Rama—were whisked off to Mumbai on March 4, 2011. Despite their jet lag, the team managed, with their first performance just two days after their arrival in Mumbai, to earn a spot in the Top 12, the Bemisaal Baara group.

On the way to the top, the Kruti girls won rave reviews from the judges for their stunning performances for songs like “Sheila Ki Jawani,” “Chann Ke Mohalla,” a Bharatanatyam fusion piece, and then an airhostess dance in the Profession Theme category. Their creativity, precision and perfect synchronization came in for a lot of praise, and they found themselves challenged in the sixth round of the competition, titled the Reflection Challenge.

The glamour of being on Indian national TV for weeks was not earned easily. The schedules were grueling. The routine, according to Shemoni, team lead, included full-day rehearsals from 9 a.m. to 4 p.m. Wednesday to Sunday. In these rehearsals, Shemoni was responsible for choreographing and perfecting two different dance routines. Mondays were “technical days,” involving dress rehearsals on-stage and coordinating with the production crew, followed by late-night practices for the final taping of the episode on Tuesday.

Apart from the rigorous routine, the girls faced additional challenges in dealing with the Mumbai traffic, and having to communicate in Hindi. “At first it was a culture shock,” Bianca said. “But as the days went by, I started to fall in love with the city. Being the only non-Gujarati in the group, I was the only one that could speak Hindi, and this came in handy when communicating with the contestants as well as with people outside production.”

The absence of a normal school routine meant long-distance learning for several girls. Keshal started home schooling and took her classes and exams after rehearsals; Shreya and Jaimisha worked online, submitting assignments via email; and college students Shivani and Bianca took a semester off school.

Used as they were to performing for audiences in America, Shivani pointed out, the team found their biggest challenge was to figure out what the judges, the channel and the audience wanted from them. And coming from America also made it a matter of great pride to win a place on a platform that showcased the best dance talent in India. Shemoni said, “To be from the U.S. and to compete on such a huge platform with expertise in Bharatanatyam made us feel so proud.”

“Indians outside of India cling to our culture to make up for the fact that it is not a part of our daily surroundings,” Shemoni observed. “Most of the (other) teams were proficient in western dance styles like hip-hop, contemporary and jazz.” Praksha Patel, team mom, told Khabar, “I think they (contestants and organizers) were expecting the girls in the Kruti team to be very Americanized. The fact that Kruti emerged as the only team with an Indian classical dance background reflected how rooted the team was to its cultural origins.”

For the Kruti team, finishing in the Top 25 in America’s Got Talent in 2010 was a thrill in itself. But representing America in a reality dance show in India was not only a first for them but also an entirely different kind of experience.

Mili said, “Many of us grew up watching Indian TV shows like Boogie Woogie and Dance India Dance, so having the opportunity to participate in an Indian dance talent show (in India) was quite amazing. We not only learned the ins and outs of the Indian reality show business, but also got to meet some extremely talented and kind people.” The team was judged each week by big Bollywood names like Terrence Lewis, Javed Jaffrey and Mallika Sherawat, who was later replaced by Urmila Matondkar.

Having had the opportunity to do a workshop with Lewis in Dallas last year, Shivani already knew the girls were in for the opportunity of a lifetime. All six girls agreed that Lewis was the most perceptive of the judges. “His experience as a judge on other dance television shows validates his comments and critiques,” Mili said. “He knew when to give positive feedback when things were done well, but he also gave criticism where it was deserved.”

Kruti worked with choreographers from Lewis’s dance company. The girls explored Film City, one of the city’s most popular studios, and had the privilege of dancing with popular film actor Akshay Kumar on one episode during which the actor escorted Shemoni’s grandmother on to the stage.  All the components of a show—the hair, makeup, costumes, trailers, lights, and cameras—had their own thrilling impact. “We were part of a press conference, with about 30 media representatives, and even got to be on the radio,” recalled Jaimisha.

But homesickness did set in, inevitably. According to Praksha, things hit a low when the team fell to a place in the bottom three. “These were hard times for the girls, but somehow they kept going and persevered.” Keshal recalled that Praksha, the team’s chaperone, “made our rooms feel like home by putting up inspiring quotes…and other little things.”

Everyone helped to keep the Kruti team going—the production crew as well as other competing teams. With all the contestants living under one hotel roof, sharing meals, and celebrating anniversaries, birthdays and each other’s successes, a camaraderie soon grew among the teams. “We started the show as acquaintances,” Shemoni said, “but we left the show as family.”

The Kruti team made it to the seventh round, performing “Dola Re” with a western flavor, after which they were eliminated. “The judges liked it better than the other bottom three performances,” Shemoni said, “but we lost because of the audience vote.”

The “Gujju gang”—as Shemoni jocularly described the Kruti team to the judges—learned extensively about India’s culture, people, movies, and how to better converse in Hindi. They learned to cope with limited internet access and lack of schedules, and to manage homework and synchronize dance and music.

The team learned several different genres of dancing at Chak Dhoom Dhoom, from contemporary, jazz and Broadway, to whacking and hip-hop.

But the experience wasn’t all about accomplishment—it was also about learning life lessons and gaining insights into themselves. “One phrase that I have definitely cherished during our trip,” said Shreya, “is tension mat lo (No need for tension—don’t worry).”

“I now know what it takes to remain in a competition for so many weeks,” she added.  “I have not only become a better dancer, but I have also become aware of my body and strength.”

“I feel like I grew to be a better dancer and a better person.” Jaimisha said. “This experience taught me a lot about just dancing with your soul, letting go, and giving it your all.”

Observed Keshal: “Because of the judges’ evaluations, I feel that I grew more as a dancer. I learned that you must be aware of every single part of your body in order to fully execute a move.”

“Dance is subjective,” explained Shemoni.  “Throughout this process we learned to filter comments and use them to strengthen our character and our dance ability. We ended 2010 with a Top 25 finish out of 70,000 entries in America’s Got Talent. We started 2011 with a Top 9 finish out of 5,000 teams in Chak Dhoom Dhoom. Now that we are back we are excited to see what’s in store for us next!”