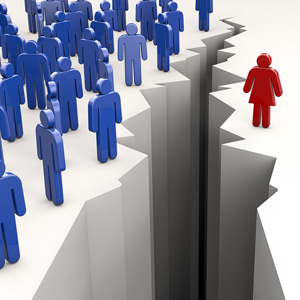 The percentage of women in engineering jobs is so embarrassingly low—in the single digits or low teens—that many tech companies refuse to release diversity data. Their excuse is that the pipeline of women studying engineering is shrinking.

Tech-industry executives say they have an extremely difficult time finding technical talent and that this shortage hurts their company’s performance. They claim to look far and wide, including abroad, yet they overlook the lowest-hanging fruit: women and minorities. This creates a self-perpetuating cycle. When it comes to women, because there are not many in engineering, girls don’t perceive computing to be a friendly profession. So, fewer are entering the field. In 1985, 37 percent of undergraduate degree recipients in computer and information science were women; by 2011, this proportion had dropped to 18 percent.

The technology industry is excluding a significant proportion of our population from the growing technology economy, and things are only getting worse.

This problem can be fixed, but we need to start by acknowledging that the fault is with the employer rather than with women. Employers usually have good intentions and do not deliberately discriminate against women and minorities, but there is a hidden bias that needs to be understood and overcome. The diversity data that corporate executives usually look at are at the company level rather than at the departmental level and include lower-level administrative/support roles. If these data were analyzed at the departmental level, particularly in technology, executives would be shocked at what they saw. They would realize that the deck is stacked against women at every stage of the game.

I talked with some of the leading experts on diversity for a book I’m writing about women in innovation. Here are some of their recommendations for understanding the problem and finding solutions:

Look at how jobs are defined. Lucy Sanders, CEO of the National Center for Women & Information Technology, says that companies need to pay attention to what types of technical jobs are given to women. Are they the low-status technical jobs? Are they high-prestige jobs such as architect and lead designer? How are the jobs defined? Are they written in such a way as to solicit more responses from males? For example, job descriptions that are overloaded with long lists of required skills (which may or may not be needed on day one, and could be learned on the job) may cause women to not apply if they don’t have each and every skill; men on the other hand will tend to apply if they have only a subset of the skills, Sanders says.

Broaden the talent pool by looking beyond the usual recruitment grounds. Companies need to build ties to universities where there are high proportions of women and minorities, and to recruit at conferences such as the Grace Hopper Celebration of Women in Computing and the Women 2.0 Conference.

Interview at least one woman and one member of a minority for every open position. Freada Kapor Klein, founder of the Level Playing Field Institute, says companies should implement a rule such as the Rooney Rule for National Football League teams. This requires all teams to interview minority candidates for head coaching and senior football operation jobs. The key is to make sure that every hiring pool is diverse with respect to gender and race.

Have at least one woman on the hiring team. Telle Whitney, CEO of the Anita Borg Institute, cites academic research that shows people tend to hire those who are similar to them. She says that the demographics of the hiring team greatly influence the outcome of hiring. It also makes a difference in offer acceptance. A female candidate will recognize that the business values diversity if the interviewers are men and women, and she is more likely to join the company if offered a job, Whitney says.

In hiring decisions, the focus should always be on competencies rather than on credentials. Klein says that degrees from prestigious schools usually weigh heavily over the ability to write code or solve problems. Candidate-screening criteria such as unpaid internships, summer international experiences, and gap years also create an unfair advantage because these are signs of a wealthy background and not earned meritocratic achievements. She says that companies should focus on “distance traveled”—such as the demonstrated ability of people who grew up in modest circumstances to overcome adversity, or to be the first in their families to go to college.

Once we increase the proportion of women in technical roles, the challenge is to retain them and ease the transition to senior positions.

Vivek Wadhwa (www.Wadhwa.com), a fellow at the Rock Center for Corporate Governance at Stanford University, is director of research at the Center for Entrepreneurship and Research Commercialization at Duke University’s engineering school, and is distinguished scholar at Singularity University and Emory University. This column also appeared in The Wall Street Journal.