Entertainment: A MAN FOR ALL SEASONS 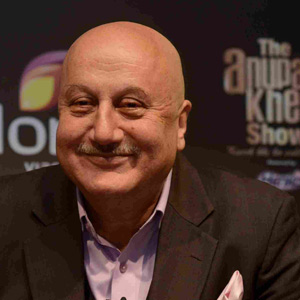 From being a thespian to a comic, the versatile veteran Anupam Kher has done it all in showbiz. In an interview with Khabar, he shares his sharp views and career highlights.

We wept with him in his debut film Saraansh (1980) and dissolved into giggles in Kuch Kuch Hota Hai (1998). Is there anything in showbiz that Anupam Kher has not done? Apparently not. Soon after his student days at National School of Drama, Anupam carved out a wide-ranging, brilliantly multifaceted career path, switching seamlessly between cinema (Bollywood, regional films, and Hollywood, too), theater, and television. Besides ratcheting up a host of memorable roles ranging from the tragic and sensitive to the comedic, Anupam has ventured into production and direction. Along the way, he’s picked up a Padma Shri, a couple of National Film Awards, five Filmfare awards for comedy roles, and headed the National School of Drama and Film Censor Board. He’s also given back to the world of entertainment by opening an acting school in Mumbai. He’s now—take a breath—a sought after TV show host, motivational lecturer, and the author of a popular book. Khabar caught up with the versatile and very cool Anupam Kher when he visited Atlanta to stage his new play Mera Woh Matlab Nahi Tha that’s currently garnering rave reviews around the world. 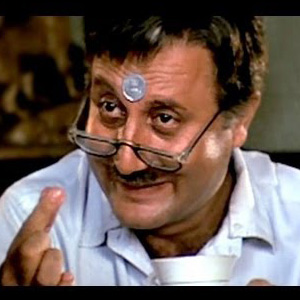 (Left) In a slapstick role.

Talking about the play to begin with, apart from it being a humorous play, you’ve touched upon a lot of social issues, all in one breath. What brought you to this decision?
It’s not decided that we should talk about social issues. A play is a play. In that play whatever comes across, if the social issues do come across it’s wonderful. Otherwise, any play, any film is a fictional story written as a story and in that story you can incorporate few things but you cannot decide that OK let me now talk about social issues, and comedy, and [so on]. It’s a good way of….it’s a successful play, that’s why it’s successful, because it includes everything. End of it, the story appeals to people, who were once lovers and meet after thirty-five years.

Your novel combination of theater and cinema technique was quite effective. How and why did you come up with that?
I wanted to mix for the first time theater and cinema technique together and merge it. We [Kher and Neena Gupta] could not have played the younger [versions of the] characters on stage, so we decided to do the flashback with two different actors in a film backdrop. Even the part where [the character of] Kaddubhai, where Satish Kaushik is talking on the phone would not have been effective simply with audio alone because it’s a visual medium. And we needed to add all those Houston slides and park and everything. It gave it a very rich production vibe. Also it’s important to use this spectacular form to do something new. That’s what growing up is all about.

In terms of your management, between films, your TV production, the show, and theater…
And my school, teaching, acting, and my motivational lectures…

How are you able to…
My grandfather used to say a busy man has time for everything. So if you do something which you like then you will find the time. It’s only if I am asked to do something I am not happy about that I will not be able to do it. But if I am doing things which give me creative satisfaction, emotional satisfaction, then it’s not very difficult to do it. 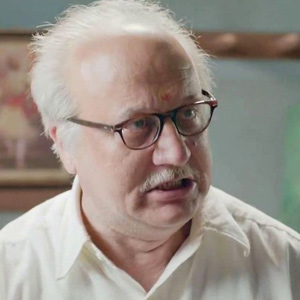 In a serious role: Kher is seen here in a still from Ekkees Toppon ki Salaami.

Indian films and actors have come a long way, and are integrating into global cinema. Where do you see this heading?
To start with, it’s a very economical based necessity. Because India is a big market for Hollywood films. Their films do amazing business in India also. So every studio in Hollywood wants their presence. And with that comes the possibility of adding actors from India. I think that’s the first reason. Now there are writers writing with Indian characters in mind.

I am so happy and proud of Priyanka Chopra, she’s coming in a mainstream series called Quantico. I recently did Sense8. Irrfan is doing such wonderful work. Anil Kapoor is doing well. So, we are basically from Bombay, not [that] we live in LA and we are being picked up. Even Indian actors living in the U.S. are [getting more roles]. So I think it’s becoming a global village, it’s easy to now be part of each other’s’ cinema.

But conversely, reading from the media reports, when Robert de Niro visited your institute, the media wrote about how our actors were fawning over him and touching his feet…what is your reaction to that?
That’s our parampara (custom). When we respect somebody, that’s a very important thing to do. There is no denying that Robert de Niro is one of the greatest actors in the world. Even if he goes anywhere in the world, I think people should touch his feet, and why not? He’s done so much. I as an actor, from drama school to my struggling days, revered him. I’d be very happy to be touching his feet. I was very honored that he came to my school and everybody who touched his feet, they were small little actors who were looking at their god of acting. That was wonderful.

In terms of your consummate work in the industry, you started off with an extremely challenging role, playing an old man when you were in your youth. Now when you dial back, what is one role that you think would be the most challenging for you that you haven’t yet…
I’ll ask this question after 30 years, when I’ve reached that stage of “Ok, now let me look back at my career.” Another thirty years to answer that question.

Do you have anything in your mind that you strive for, in terms of a role?
No, for me journey is much more important than the destination. I enjoy the journey and in that whatever I want to do is happening and I am doing it. Look at this play. I am doing for the last 3 months now and we have already done 25 shows, packed, superb all over India, Singapore. In India, in Chennai, Kolkata, and the response here is phenomenal so for one year I will not be doing else anything but taking this play all over the world. 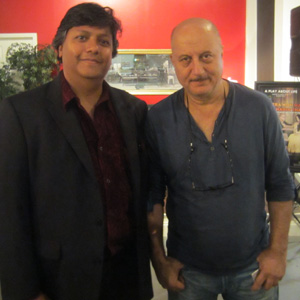 From the institutional point of view, looking over the new breed of actors that are coming to be trained, do you see any degree of variance from... ?
The younger generation is automatically a very confident generation, so half the job is done. From a generation of mine, it took years for us to gain confidence. But today, they have so many sources of information and knowledge and everything. They come as confident people and I think cinema has changed in India for the last five years. I think it is the golden period of Indian cinema because you can make movies like Khosla Ka Ghosla, Special 26, Wednesday, and Masaan and all these films, and still there is an audience for that. So we’ve moved ahead.

From all the three mediums that you have completely owned, is there a favorite?
I love doing theater because it brings me closer to the audience. It also tests me as an actor, it polishes me as an actor. It is also is a great adrenalin rush––there’s no retake in theater. You just have to be there. But I have been fortunate enough to do varied kinds of roles even in cinema. And television’s reach is amazing when I do the Anupam Kher Show—Kuch Bhi Ho Saktha Hai, the way it reaches in 48 countries or 58 countries including the US and Canada. It’s done very well in the first season and I think the first two episodes of the second season have also been appreciated. You have to be good and then every medium helps you. If you’re bad then you’re bad in every medium. I would rather be good in every one. And I love doing that. I am passionate about life, so it’s wonderful to be able to do anything.

You mentioned you are a motivational speaker. Where do you speak?
I have spoken at Oxford, at Cambridge, at Kellogg Business School, at all the IITs and the IIMs.

Any message for the young aspiring actor?
There is no substitute to hard work and honesty. That’s all.