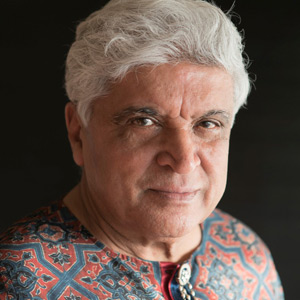 He has been entertaining us for five decades, and in the process, has become a one-man institution in Hindi films as its leading poet, lyricist, and screenwriter. The Padma Vibhushan award-winning artist talks to Khabar.

These three pedestrian words of the Hindi language went on to acquire a cult status amongst Indian cinema lovers of the 1970s. This and many other lines from Sholay—arguably, the all-time most successful movie in Indian filmdom—became so popular that they would roll effortlessly off the tongues of the legions of fans who had them memorized down pat. 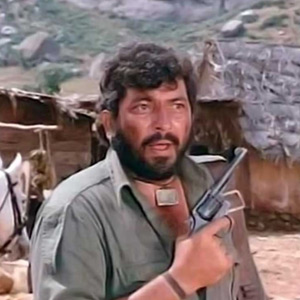 Javed Akhtar of the Salim–Javed duo who wrote those dialogues has since become a one-man institution in Indian cinema. Few enjoy the stature that he does as a poet, lyricist, and screenwriter who has regaled movie goers for five decades—earning him the prestigious Padma Vibhushan, one of India’s highest civilian awards. 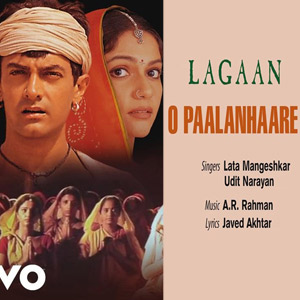 The genius of Javed sahaab, as he is known in the industry, is his finesse, both with sublime poetry on the one hand, to massively popular dialogues and songs on the other. The man who gave us the moving “O Paalanhaare” from Lagaan, India’s only Oscar contender, is also the one to animate the menacing Gabbar Singh of Sholay, who retorts, “Ab…goli kha,” when Kalia, his loyal henchman pleads, “Sardar, maine aapka namak khaya hai sardar.”

Javed sahaab’s filmography is an endless roster of massive hits. As a wordsmith, he has entertained us in one capacity or another in more films than we can handily count. Besides Sholay and Lagaan, the following list of movies barely scratches the surface of the totality of his work: Haathi Mere Saathi, Don, Kranti, Betaab, Mashaal, Silsila, Saagar, Tezaab, Zubeidaa, 1942: A Love Story, Jodhaa Akbar, Dil Chahta Hai, Om Shanti Om, Slumdog Millionaire, Wake Up Sid, Zindagi Na Milegi Dobara, Dil Dhadakne Do.

Ever wonder where the creative inspiration comes for a prodigious artist like Javed sahaab? Wonder no more. In an exclusive phone interview with Khabar, excerpts of which follow below, the legendary lyricist touches upon some of that. The interview itself is a teaser to his upcoming show in Atlanta, “Main Koi Aisa Geet Gaoon” on October 21st at The Rialto Center for the Arts, where the legend will share some interesting anecdotes, back stories, and inspirations behind his songs and screenplays.

Javed sahaab, what are the key influences that shaped your career when you got started in the film industry?
Aslam sahaab, I first got involved with the film industry in 1965, though, in those early years, did not get any substantial work. I finally started getting some work in 1970. Salim sahaab (Salim Khan) and I worked as a pair and wrote movie scripts for 11 years. I started writing songs for the first time in 1981 in the movie Silsila (“Dekha ek khwab to yeh silsile hue...”). This in itself is such an amazing story. Yash Chopra asked me to write a song for that movie. Even one day prior to that day, I had never even considered writing songs for films!

I have worked closely with Yash Chopra, Ramesh Sippy, R. D. Burman, Laxmikant–Pyarelal, Anu Malik, Shankar–Ehsaan–Loy, A. R. Rahman. They all have different styles and personality traits. Working with all these different personalities has given me such different experiences, and there are many interesting and funny stories that go with these interactions. 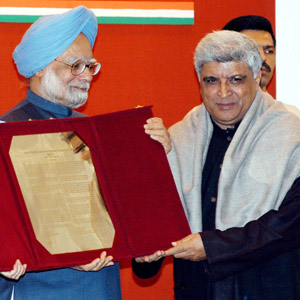 You mentioned the song from Silsila. That explains your debut in song writing. How did you get into movie script writing?
Interestingly, after my graduation I aspired to become a film director! As I started working on movie sets as an assistant to the director, sometimes there were occasions when there was a need to change a dialogue or make some other similar change. That is when I offered my services to basically keep the directors pleased with me and show them my utility. At times I would write a dialogue or scene here and there, which impressed my friends and they suggested that I start writing and become a writer. Gradually I started getting more opportunities to write and some of the scenes and dialogues became popular, which of course gave me encouragement. That is how I got involved in writing.

I feel your initial movie scripts were more Westernized than other Hindi movies compared to the ones written later in your career. Can you comment on that?
I beg to disagree. For instance, if you take the plot of Zanjeer or Deewaar it was a story on human relationships, and brothers who didn’t get along. That’s certainly common in Indian culture as well. I have to say that if we were influenced by popular culture we were equally influenced by Krishan Chander, Rajinder Singh Bedi, Manto (popular Urdu/Hindi writers) as well.

Do you feel your writing style is burdened by the impact of your father and forefathers who were acclaimed poets themselves?
Believe it or not, I felt no burden. My father’s and my grandfather’s style has always been simpler and plain…without too much usage of Farsi. The poetry that I write is my style and my style only; it is not impacted by how my father or grandfather wrote. Our tradition has been to follow No Tradition! Even my son and my daughter, Farhan and Zoya, have their own style and make movies in their own unique fashion.

You are a script writer, a song writer, a poet…what do you enjoy most?
I enjoy all of it. When the work is good, I enjoy it very much. When it’s not…I try to improve it, but I am not partial to any one of it. I get as much joy from script writing as I do in writing songs.

You have worked with so many different directors, actors, music directors. Everyone, I’m sure, wants to work with you. How do you choose who to work with? What do you look for?
I have always enjoyed working with people who respect my craft, give me enough room to truly express myself. Sometimes people become too prescriptive and want to almost write the song themselves. I prefer to avoid those people. I also write what my heart holds true. If someone wants me to write a song that they think will sell, but I know is not my style, I steer away.

You have so many famous lines from your films that have gone viral and have become part of the Indian psyche. A dialogue writer in that way can bring change in society and the culture of the country.
That’s true. I agree, but our culture is also reflected in our films…when society changes, films change, too. They both have an impact on each other.

As a lyricist, are you satisfied with the quality of song writing these days?
I am disappointed. It’s a really bad situation these days. The beauty of language has been completely destroyed. But…the tide is turning. I feel that we’re about to experience change. I feel people are pining for more poetry, better quality, and I am optimistic that people will demand those kinds of songs soon. When we demand quality, we will start getting it.

Many entertainment shows, big and small, focusing on Hindustani music and movies, come to town. They all have their fan following. Your upcoming show in Atlanta probably attracts a bit of a different crowd. Music almost becomes secondary for these people as they look forward to being in your presence. Would you please share some details of your show with us?
These shows that you mentioned have great music and are great shows. My show is a little different in a few respects. For example, [apart from the filmy stuff] I’ll be sharing my literary poetry. There will also be a Q&A session. The audience will be able to ask me any questions they might have. There will be a band of very talented singers that will perform some of my songs live.

You see, the songs that we all enjoy from our movies just don’t appear out of thin air. There are so many people involved in a song’s creation: a writer, a music director, singers, and actors, just to name a few. So I will go into how we come up with the lyrics of the songs according to the situation of the story. Every song has a unique background and story behind it. I am going to share the long journeys of the creation of the songs and all the events and incidents that helped shape it. Some of the incidents were funny, some emotional, and some sad. There are a myriad of stories about these songs that relate to people I have worked with…people such as Yash Chopra, Ramesh Sippy, R. D. Burman, Laxmikant–Pyarelal, A. R. Rahman, Shankar–Ehsaan–Loy, Anu Malik, Lata ji, Kishore da, or even newer singers like Sonu Nigam.

Just as trees develop individually in a unique manner, so do songs, and that is what I will be sharing with the audience.

Aslam Pervez is a writer, poet, radio broadcaster, actor, and voice-over artist. He is known in Atlanta for being the host of Zoom Atlanta Radio (http://www.zoomatlantaradio.com/)