Entertainment: The Jihadist of Irony 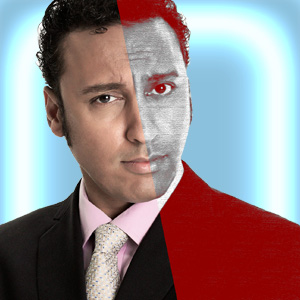 Funnyman and actor Aasif Mandvi has come a long way from the days of playing stereotypical characters. Now he parodies them. As one of the masters of this art form, he is a regular on The Daily Show with Jon Stewart. Our veteran contributor Lavina Melwani catches up with Mandvi at the launch of his book, No Land’s Man.

Aasif Mandvi is the quintessential immigrant—he belongs nowhere and everywhere. He has knocked around three continents—Asia, America, and Europe—and appropriated a bit from each of his hometowns: Dhule in Gujarat, Brampton in the UK, and Tampa and New York in the US. Being brown, being different, being Muslim, he’s had a tough time, and so many of us will identify with his story because in many ways it is our story, too.

In fact, as a journalist who’s followed his trajectory to fame, I’ve had a chance to see Mandvi take on all these roles in real life.

“Actor-writer Aasif Mandvi has played his share of cabbies, newsstand workers, and other spunky dreamers who have washed up on the shores of America,” I wrote in Newsday, the American newspaper, in 2001. Yet, even in real life, he is never totally out of character, because he is himself an immigrant, fueled and sustained by his dream to be an American actor.

The turning point was his first one-man show, “Sakina’s Restaurant,” in which he played all six characters. Using sketch comedy and stand up, all the characters evolved out of his own family. He was relatively unknown at that time, the space was the small American Place Theater and the tickets were just 10 dollars. For Mandvi it was an act of bravado—would the seats even get filled? Yet the play hit people in the gut and the heart, and went on for a six-month run through word of mouth. It won Mandvi rave reviews and the prestigious 1999 Obie Award. 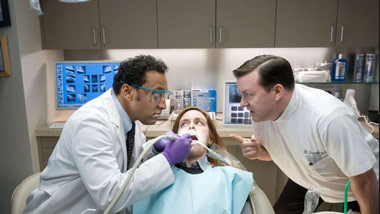 For a young brown actor in America, it’s been a constant case of re-invention. After all, how many cab drivers, doctors, and terrorists can one play? To circumvent the indignity of stereotypical roles, Mandvi knew it was imperative to create his own material, telling the story of South Asian immigrants.

“Having been boxed in by the industry, my response was to write something that would break me out of that box,” he told me. “I wanted to purposely create stereotypes and then break them.”

This has become his mantra in all the material he writes, slaying stereotypes. He’s created the avatar of the first Muslim correspondent on The Daily Show, becoming almost a spokesperson for young Muslims who have identified with this hip, outspoken character. Suddenly it’s cool to be a Muslim! He even went on to receive a Courage in Media award from the Council on American Islamic Relations. 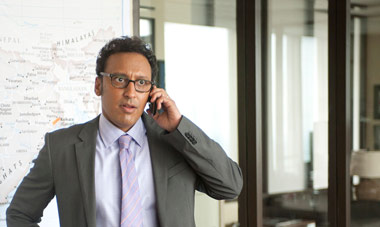 “Aasif is one of those Renaissance young men who do everything,” says Aroon Shivdasani, Director of Indo-American Arts Council (IAAC), who first met Aasif many years ago when he was still taking acting classes. IAAC recently organized his book launch at the Aicon Gallery in New York for his new book of personal essays, Aasif Mandvi: No Land’s Man. Aasif has done everything from Hollywood movies to television shows, including the lead in Merchant Ivory’s The Mystic Masseur. Recently he was seen in projects as diverse as Disney’s Million Dollar Arm and the Pulitzer Prize winning Broadway play Disgraced.

Yet celebrity has not changed Aasif Mandvi as it does so many others, and the packed standing room audience at launch of his book was evidence of his popularity, with friends and followers from all phases of his life. The book takes on race, immigration, religion, food, and family—and has you chuckling on every page. We never knew life—and all our hard times—could be so funny. And perhaps that is the way to take life, with a large dose of humor.

As a young boy, Mandvi, whose full last name is Mandviwala, totally identified with Fonzie of Happy Days, the popular television show, for the Fonz’s actual name was Arthur Fonzarelli. “He’s got a dorky name and he’s really cool. That was the beginning of my wanting to be an actor!” he recalls of being an 11-year-old in America.

No Land’s Man is a fun and eminently readable collection of short, personal essays. Who wouldn’t be tempted to read something titled “Curry Pot Cowboy” or “The Jihadist of Irony”? With self-deprecating humor, Mandvi takes his own life and turns it into an open book.

One essay titled “The International House of Patel” should particularly resonate with those of us from immigrant families. Here, Mandvi’s immigrant family takes a road trip in a rented station wagon with visiting grandparents from India. Writes Mandvi,

Before we left, my father had gathered us together in the living room and handed us each a white T-shirt. I unfurled mine and saw that it sported an authentic and impressive IHOP logo under which were written the words ‘International House of Patel.’

“But our name isn’t Patel, Dad,” I pointed out.

“Mandviwala was too expensive,” he said. “They charge by the letter. And besides, Americans don’t know the difference.”

The idea was to invoke brand loyalty and get a discount at IHOP for his father’s favorite meal: brunch.

“The beauty of America,” my father would say, “is that they have so much food, that between breakfast and lunch they have to stop and eat again. Breakfast and lunch! Put them together and you get brunch! Genius, right? Bloody Americans! I love them. Their English is atrocious, but they have a word for everything!”

Listening to Mandvi read this chapter from No Land’s Man at the launch was pure performance art and a real treat. Putting on an Indian accent, he read his father’s responses and the room was in fits of laughter. All of us have experienced Indian parents first hand, and it’s a credit to Mandvi’s family that they have been very sporting about the hilarious exposés.

Ask Mandvi how his family has reacted to his book, and he says drolly, “They are not big fans at all. They want to sell you their copy of the book!” Yet he concedes that his highly supportive family, though confounded by the book, have allowed him to do his art: “My dad will even sign the book for you!”

There is pain and pathos, too, beneath the humor, as one finds in the essay “The Chili Pepper,” and each essay takes us through different experiences of the immigrant life.

In the book, Mandvi also explores his relationship with Islam and the changing perceptions of Muslims in society. He writes,

In the last two decades I had become disillusioned with my relationship to Islam—in truth I had seen the inside of more bars than mosques. I mostly defined prayer as an excuse to ask God for things.

“Please, please, please, Allah, let me get this part. I promise I will give to the poor,” I would say after an audition. “I will pray five times a day if you just make it so they cast me as Islamic terrorist number 3.”

Now of course, Mandvi is the senior Middle East/Muslim/All Things Brown correspondent on The Daily Show and this is a very big deal. As he writes,

I became the Gupta/Zakaria/Velshi/Amanpour masala on The Daily Show smorgasbord, which at that time consisted mostly of white people. More significantly, however, I also brought the halal factor by becoming The Daily Show’s ironically named ‘Senior Muslim Correspondent.’

Indeed, the “The Jihadist of Irony” is a wonderfully thoughtful essay which shows how humor can change perceptions and open a dialogue among people of diverse views in America.

Earlier, says Mandvi, he was treated by Muslims at his parents’ mosque as if he had a bottle of whiskey in his sock and a pig for a best friend—now they react as if he’s one of their own and they even want to introduce him to their daughters!

This is, of course, Mandvi’s first book. How different has the experience been from all his other work? He says, “I’m a performer—I always get up and perform before people and they give me their feedback. And that tells me whether something is working or not. For the book, basically you have to start bothering your friends who are usually in the middle of something, like childbirth! I called a lot of friends—and now there are a lot of them who don’t speak to me anymore.” 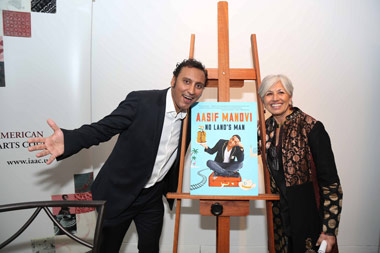 An earnest guest at the book launch asked Mandvi when he first started writing. Mandvi replied just as earnestly, “Well, I started writing when I was very young—pretty much when I learned to read. I guess I could have started earlier than that but then it would have made no sense at all!”

Yes, Mandvi has been writing a long while. I particularly enjoyed one quote in the book where he described the power of profanity, usually regarded as uncivil and coarse:

Profanity is the chili pepper of language. If used by an idiot or a clod, it can overwhelm the discourse so the meaning is lost, but if used by a linguistic master chef, it can insert a piquant passion to the point where even though your ears may burn and you may want to rinse your mouth out, you cannot say it doesn’t sound delicious.

What better antidote to pain and struggle and the search for identity than to laugh at oneself? In No Land’s Man Aasif Mandvi takes you on a fun, positive journey, exploring plenty of hot button issues.

Mandvi (second from right) shot to larger recognition through his role as the satirical “Senior Muslim Correspondent” on The Daily Show with Jon Stewart.