Essay: Feast for a Crow 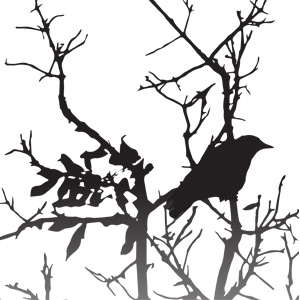 Vignettes on mortality and traditions.

It was not dawn. The rattling of our front door latches woke me. Scuffling foreign feet and unfamiliar hushed voices overpowered the silence of our apartment. I walked across the connecting double doors into our living room. Mother was huddled on the floor with her back towards me, her polyester saree tightly wound around her. I reached my arms around her waist. She was cool but quivering. I nestled my chin in her shoulder letting the gaze of my eyes rest on a small white bundle lying on a small, white, makeshift cotton mattress. Within its soft folds I saw my baby sister. She was not moving but looked peaceful. I sensed she was not going to wake. I hugged my mother again, and asked, “Do you want some water?” I was four. My mind raced to the idea that perhaps I was not going to have to fight for mother’s attention anymore. I bowed my head at the family altar and went back to sleep under warm blankets.

Mother went into depression. My 8-year-old brother held her hands and hugged her often. Somehow he understood. Father buried himself in work. I felt that seeing me reminded him of his other daughter, whom he had been unable to protect. Perhaps he had not loved either of us enough. He never forgave himself, and he never stopped trying. I felt guilty for wanting his attention.


Death came to my maternal grandparents’ home for a man who had loved his grandkids, the restaurateur who taught mother cooking, with legendary, larger than life stories. After his stroke he shrank to a collection of flesh, bones, and spirit. That day his tall frame was covered in a thin white sheet to keep him cool while his body slowly quit. My grandmother, my aunt, and my parents held his hands, smoothing his bald head, singing prayer verses, comforting him in his passage. I sat alone on a large swing in my parents’ house nearby. The walls grandfather helped my mother build now separated me from the eerie howling of our farm dogs, the farm he had chosen for us. Grown-ups took up the duties of last rites and cremation. I wrote a poem and wept. I was 18.

Some years later, I was told that a dear friend had passed. We had picnicked a few days before. She was too young to die. I was to find her best friend and tell her. The days that followed became one giant wad of melancholy, tacked together with soaked handkerchiefs. She was dressed in her mother’s wedding finery—lying in state. The concrete pavement was strewn with spent Nerium flowers, their musky fragrance punctuating the sadness. Priests and her family lowered her next to her mother, and covered her with earth. We girlfriends grieved, mourned, and comforted each other that day and disbanded after. I left for the U.S. six months later. I was 25.


Death came again in a cold hospital room. That morning, Father’s grey eyes became more opaque, his lips parched; he tried to breathe. We played his favorite prayer hymn off my phone. His breath labored so we waited outside. My 12-year-old daughter held his hand until the nurse asked her to leave, too. Death’s long drawn taunting was ending. Father breathed his last near a large window, while we sat outside the ICU. My brother saw Father’s heart rate drop to zero. He came out to tell me. I was to fetch Mother. I was to fill out forms so that Father’s body could be ‘released.’ As I stumbled through it, Father’s spirit was already free—soaring into the monsoon July skies of the city he once loved and protected, his Bombay. I was 45.

We were driven home to prepare for the last rites. We cleared the living room, wept, and set chairs in the courtyard. Priests and others were alerted for Father’s last rites, scheduled the next morning. Brahmin rituals were strict. Dry firewood was needed—but the monsoons meant damp wood. There might not be roses at short notice. Mother wanted the best ghee for the pyre. Someone printed out a portrait of father. We tried to sleep.

I explained Hindu cremation and spirituality to my daughter that morning. We collected fragrant flowers from the garden and wrote him a letter; Father loved both. When my brother brought him home one last time, our hands and feet failed us. Mother was beside herself. I was to light a lamp and garland his portrait to initiate the rituals. I was to help with a ceremonial bath before cremation. I was to ensure attendees had a modest meal, arrange cleansing baths for the men after the rites, and see that Mother didn’t starve. We bid Father’s body goodbye. From afar, I watched brother drowning in grief and responsibility as he followed the priest’s instructions. I grieved only in moderation because people were watching. I was to … because I was not the child anymore, but the woman of the house. Those were the rules.

Solitude, silences, and sobbing blanketed the fortnight. Father had fallen in love with Mother at her father’s restaurant. I had cooked my very first meal for him. And yet, in our house of chefs, strangers came to prepare the final ritual feast. The priest said those were the rules. Two women made a feast for a ritual that honored a man they never met. They made things I had not seen before or that Father would have enjoyed. The priest instructed me to serve twenty-one miniature banana leaves, for the visiting spirits. Brother took a platter out to the backyard inviting the ravens and crows to the feast. They embodied Father’s spirit, said the scriptures; it was the cycle of life, they said. The ravens hesitated. Brother talked to the circling birds, hoping to converse with Father, to convince him to continue his spiritual journey without attachment. After much hesitation, one raven pecked through. A proclamation followed: the crows had feasted. Brother and Mother sighed. I instructed the cooks: the ritual feast could now be served. Those were the rules.

Chef and cookbook author Nandita Godbole is also a freelance writer and an entrepreneur who blogs at www.currycravingskitchen.com.