Home > Magazine > Features > Americana: Everyone is a Winner!

Americana: Everyone is a Winner! 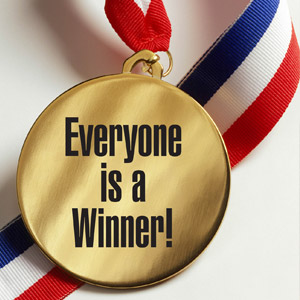 Nowadays every suburban home is lined with trophies and medals that don’t mean much. That’s not how it was in the America of the past.

In the seventh grade, I wanted to make the school’s basketball team, and despite my thin frame, I had the skills to do it. After a series of tryouts, I was one of 15 players hoping to make the team of 12. One more scrimmage was ahead, but instead of being nervous I was confident, knowing I was clearly better than a handful of others competing for those last three spots.

Up and down the basketball court I raced, but I never touched the ball. Later, I would learn that the really good players, whose place on the team was secure, had pre-agreed to throw the ball only to their lesser-skilled buddies, and to then wildly applaud their simplest of baskets. Late in the scrimmage, I grabbed a defensive rebound, but instead of passing the ball, I dribbled the length of the court and made a difficult shot. The gym, save for the sounds of squeaking sneakers and a shattered dream, was quiet. I left the gym in tears.

Several years ago, I walked into my teenage daughter’s room. Her bed was nearly covered by an astonishing number of colorful ribbons. I told her that during my school years I never won a ribbon.

“Dad! These ribbons don’t count for anything! Anyone who just shows up gets one. I thought about tossing them in the trash but since the colors are pretty, I’ve decided to hang them on the wall.”

A skier races down an icy ramp, hoping to propel his body into the air at a speed high enough to reach a distant landing area. But he slips, cannot regain his form and then falls off the side of the ramp. There is no safety net, so we watch, horrified, as his now limp body flops down the unforgiving terrain. Even though we have seen this video many times before, we think the man is dead.

In the previous clip, we had seen a far happier snippet of a Little League team winning a championship game. “The thrill of victory…,” the voice-over narrator says as we watch the kids celebrate, and then he pauses, waiting for the video of the skier to play. “And the agony of defeat.”

The sequence I have just shared played for decades on the long-running weekly show, ABC Wide World of Sports.

In America, where every kid once tasted the thrill of victory and the agony of defeat, everyone is now a winner. What are we to make of this?

Alfie Kohn, a nationally respected author and lecturer in the areas of education, parenting, and human behavior, believes that America, among all the world’s countries, is absurdly competitive. In his 1986 book, No Contest, he writes that America has an unhealthy fixation with competition, and that such “conditioning” begins at birth. We need to be like other countries where children are allowed to follow their natural instinct, which according to him, is more cooperation and less competition.

Biologists such as Garrett Hardin don’t agree with such sentiment.

We are not surprised to note that young people whose needs are taken care of by their elders often fail to appreciate the inevitability of competition. What is surprising is that adults whose specialty is the behavior of human beings in groups—sociologists—should hold competition in such low esteem.

When I asked my 96-year-old mom for her view, she snapped, “What’s next? Winning and losing is part of life! Now when your father and I played golf or tennis, he never liked it when I beat him ….”

Is there any boy or girl in the world who doesn’t want to run the fastest, win the most marbles, or snap up the last checker? When I was a kid I wanted to win, but mom and dad never put such pressures on me. Games were important to me, taught me how to win, and lose. Some may think this crazy, but several decades ago it was thought that games and sports helped prepare children for the challenges of adulthood.

But Kohn, pointing to different cultures, stresses the case that American culture relentlessly presses competitive behavior on its children.

My favorite childhood board game was Monopoly, an American classic that became popular during the Great Depression of the 1930s. The player who gets the most money wins. Such was also true with the other best-selling games including Life, Careers, and Stocks and Bonds. Few American games are based on the primary virtues of faith, hope, and charity.

My failure to make that basketball team was one of many childhood events that shaped my adult life. Sure, I was in tears that afternoon, but I was already plotting revenge: someday, I will beat you, your inner circles, and your secret handshake agreements. As the school years passed I preferred subjects such as math and science, where answers were either right or wrong, and grades were not subject to the whims of a teacher. I chose a career in sales, a seemingly cutthroat profession, where results and rankings are clear and public.

Winning with grace and losing with humility, such lessons were also instilled in me at an early age. Mom and dad were good role models, so were professional golfers such as Jack Nicklaus and Arnold Palmer, tennis players like Rod Laver and Arthur Ashe, and any of the football players on the 1960s Green Bay Packers. Vince Lombardi, that team’s legendary coach, often said, “Winning isn’t everything, it’s the only thing.”

A friend of mine, Mark, called me as he was driving home from the country club. He had finished second in the annual golf tournament. “Do you think I am crazy for wanting to throw this runner-up trophy into the swamp?” he asked. No, I replied, adding that I also hated second-place trophies. To me, they are a constant reminder of what you didn’t accomplish. Heave-ho, splish-splash, the deed was done.

When I shared the above story with the kids who attended my Christian Sunday School class, they thought that Mark and I were nuts. Hah, I yapped, show me the verses in the Bible where Jesus says we should not do our best. Wishing for others to fail is a sin, hoping that your God-given talents lead to a win, most certainly not. After a lively debate, I told them another story.

When I was in junior high school, two kids were assigned by our teacher to pick teams for our recess football games. I was often one of the two. I would pick a player, and then the other captain would make his selection. The kids who couldn’t run or catch were always picked last. “What do you think of that system?” I asked the astonished class.

After mom finished recounting her sports wins, I gave her some more distressing news, at least to her. For the record—and this has been verified—she was class valedictorian of Torrington High in 1938. So I tell her about an Arlington, Virginia high school, which in a class size of 457, had 117 valedictorians. A school in California had 30. Another school decided that they didn’t have any, yet another school claimed that all of their students were in the top half of their graduating class.

I tried, but failed, to uncover any useful studies that might account for how and why this change from awarding a few trophies to many came about, so I will toss in my own opinion. In my childhood, moms and dads had three or four kids, and didn’t have the time and energy to fawn over each one. Today, with family sizes reduced, every kid becomes the focus and is more protected from the vagaries of the cold, cruel world. Peter Pan, the famous fictional character who famously did not want to grow up would feel right at home in contemporary America. Social research indicates that today’s kids are not considered adults until they are 25-years-old. For decades, American kids were ranked as the most educated in the world. Today, we are not even in the top ten, except in ribbon counts.

In 1975, Janis Ian won a Grammy as best female performer for her hit song, “At Seventeen.”

I learned the truth at seventeen
That love was meant for beauty queens
And high school girls with clear-skinned smiles
Who married young and then retired.
The valentines I never knew,
The Friday night charades of youth
Were spent on one more beautiful.
At seventeen I learned the truth.

I learned the truth not at 17, but at 13. I survived, better for the experience. The question for all of us is challenging: when, and how, do we teach our children that life isn’t easy?