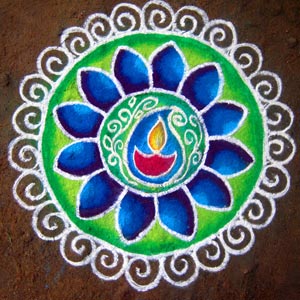 It is the usual morning rush hour at home. Leaving for work, I step out, only to halt at the gate. Sivaranjani, my house help, is absorbed in her activity: bending down, she swirls her fingers in swift strokes, releasing the white powder she holds between her thumb and index fingers. I stand to watch, forgetting all the morning stress.

A few finishing touches later, voila! An elegant pattern manifests on the floor. The simple floral motif with double line strokes creates a special effect, which speaks of her dexterity.

“Why, it is fantastic! You are quite an expert!” I reply earnestly.

The conversation, as you rightly guessed, is centered on the unique art of rangoli, prevalent in India. 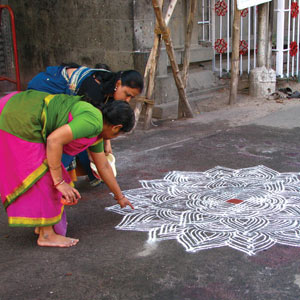 Bengaluru is a rapidly growing city, embracing modernization at a tremendous pace. However, what endears me to it is the amalgam of traditional culture and progress, making it truly multifaceted, as many pockets still carry the old world charm. A casual morning walk will reveal the front yards of many houses washed and decked with white rangolis.

Having dabbled with rangolis in girlhood, my expertise is limited to a few basic patterns, owing to a lack of acuity in simultaneously managing the powder and developing the design. Thankfully, I retain an eye for these artful exhibits and often delve into the nuances. Simple or elaborate, my reaction to a rangoli is one of awe and amazement.

The heady mix of tradition and exquisite design of rangolis distinctively transforms a place. Basic or intricate, the rangoli occupies a fair amount of space. Should the designer, on a whim, decide to add a few more dots, join them by lines and motifs, then soon enough a small pattern can extend over a wide area. It is no wonder then that rangolis demand a huge canvas. What better than a large area like the floor to exhibit? The setting is not limited to the exteriors alone. As often seen in many rural areas, the designs adorn fences, walls, stairways, and the living quarters. 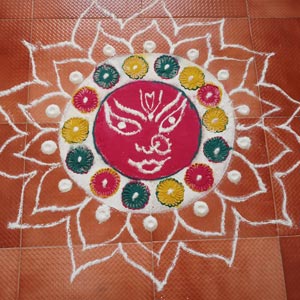 Rangolis have been the prerogative of women, and they take to the task zealously. Many households witness the lady of the house up at the crack of dawn, bathed, and earnestly involved in creating rangoli patterns at the entrance to the home. Traditionally, rangolis were prominent décor elements, drawn on mud smeared floors using white stone powder or rice flour. To enhance the look, colors made of brick, turmeric, grains, and dyed sand filled the white designs.

Cultural and spiritual significance
Atithi Devo Bhava (“A guest is as God”) is an ingrained aspect of Indian culture. What better way than the display of art to please gods and guests alike? Hence, every doorway has a rangoli to grab the visitor’s attention.

Rangolis are said to ward off evils and bring peace, health, and prosperity to the household as they act as spiritual symbols. On special occasions, it is not uncommon to see women gather around the rangoli singing hymns and songs, to fortify the well-being of the people. With such deep meanings attached to drawing rangolis, it is not without reason that they have become a part of daily rituals.

Rangolis are customary during festivals, in temples and prayer areas. In fact, the prayer room in the house has a mandatory star-shaped rangoli, a symbol of power that is believed to exude positive energy all around.

Rangolis are known vernacularly by different names—kolam, muggulu, aripana, mandana, to name a few. However, the root is from the Sanskrit ‘ranga valli.’ ‘Ranga’ means colors and ‘valli’ denotes a pattern. Rangolis find a mention in the verses of the Ramayana and Mahabharata (ordinary people are said to have welcomed their kings by laying intricate designs all along the pathways, expressing their happiness through this art—on a much smaller scale but with similar intent, parade routes are often marked with designs on streets of the USA).

These expressions of joy are true in these modern times, too, as I realized at my cousin’s wedding. Archana, the bride, celebrated the occasion by painting colorful rangolis all along the walkway of her house! She keeps alive her penchant for this traditional art during festivals and events, despite a demanding career. She is quick to respond to my appreciation of her efforts: “The credit goes to grandmother. I draw inspiration from her rangoli book and innovate on them.” 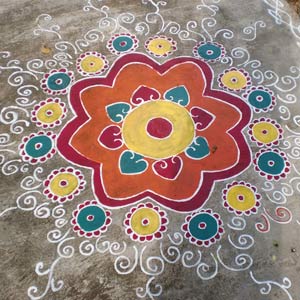 (Left) A rangoli made with chalk or paint is easier to do than one made with powders.

Explaining the intricacies of the art, Archana tells me, “Laying a flawless Rangoli with powders or rice flour paste demands tremendous ability and mastery in the skill. It is easier with chalk or paints.”

Diligent practice and focused concentration is no doubt the key to drawing a visually appealing design. Orthodox rangolis are made up of dots and curved lines forming a symmetrical pattern. In other words, these symmetrical patterns create a visual harmonic—an optical waveform (similar to a harmonized sound creating music). When a proper optical harmonic is laid out, it creates a soothing effect on the mind. Neuroscience refers to this as the field of Cymatics and indicates therapeutic qualities to it.

Science tells us that it requires the involvement of both the left and right hemispheres in the brain to maintain geometrical symmetry. The stone powder is said to energize pressure points in the fingers, activating nerve circuits in the brain. On the spiritual plane, the dots imply energy centers while the curved lines circulate the energy. Along with conventional designs, patterns also comprise leaves, flowers, images of gods and goddesses, all radiating positive energy around the place. The added colors imply abundance, vibrancy, and merriment.

Is it not incredible that such deep scientific reasons hide behind these drawings? Justifiably, our ancestors had profound knowledge in integrating art and science with spiritualism. To this day, rangolis retain their charm. Like many things, they have adapted to changing times and demands. The original stone powder is many a time replaced with chalk and paints; multihued colored powders, stickers, embellishments, and glitters find wide use. For the not-so-adept, molds, stencil-sieves, and rollers offer a helping hand.

The festival of lights is incomplete without the color splash of a rangoli. Happy Diwali!

Susheela Srinivas is a freelance writer and columnist based in Bengaluru. 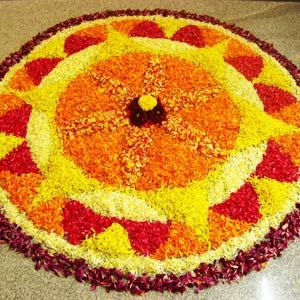 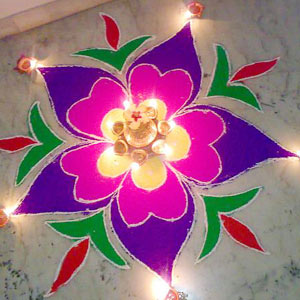