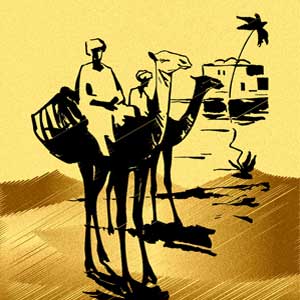 The sand shines around me, and it feels like I’m sitting on gold, the sun thawing into the wavy horizon. After three decades of living in the city, having refused as a child to become a camel driver like Father, I return now to the sands.

I imagine Father, his stilted gait, the broad-chested silhouette walking towards me at a distance, big Kalu plodding by his side. Those days nobody dared call Kalu a camel; he was Father’s obedient son, my younger brother.

Father is no more but when I think of my childhood, those sandy treks along Thar Desert with enthralled foreigners, those salt-drizzled watermelons and extra-sweet chai, there is always Father, busy lighting wood or cooking pakoras for the tourists or coaxing Kalu to munch on shrubs, jaunty dung beetles and scorpions fading into the gloaming.

That night—just before Diwali—Father and I squatted by the sputtering campfire at the base of a sand dune, enamored tourists behind us whispering love in each other’s ears as they lay on a thick blanket, heads resting on their expensive bags.

He asked me again, “Are you sure?” I nodded, and looked into his eyes, and now I wish I hadn’t. His eyes were charcoal-black in the flickering shadows but I knew they were always a light brown; in the darkness I also saw pain, the creases on his forehead and around his mouth exaggerated by the white turban and dancing flames beside us. But the selfish joy of going away to the city with my uncle engulfed me, the joy of escaping to a place of motorcars and trains and wealth and tall buildings, where our paths wouldn’t be just fiery sands dotted with insignificant temples, where toys would be more than live baby goats being tossed around giggling children.

While the tourists hushed into sleep, Father usually sang old melodies, unhurried and melancholic. His friends used empty water buckets and stainless steel plates to embellish their songs as white-skinned travelers, beer bottles in hand, swayed to the loud tunes, but Father preferred sober, more traditional songs. “I give them a pure piece of our land, my heart,” he often said. I thought his songs got slower after Mother died. When she was around, these treks with Kalu and other camels seemed more fun; she and her friends would wrap gleeful tourists in colorful shawls, paint their nails and foreheads, and refill their chai cups. Even the camels seemed noisier, with my friends and me chuckling at their frequent farts.

That night by the campfire Father remained silent after I nodded at his question; he stared at the flames, stroking the curls of his mustache, while I admired the generous curve of the moon, wondering how the top of city skyscrapers would appear in its light.

“Take care of him. He’s just nine,” I remember Father telling my uncle the next morning. Then Father took me aside to the back of our house and told me a story of how one day he met the deputy to the Indian Prime Minister, and how impressed he was with my father’s manners and with the ride on Kalu. The deputy asked him to come to New Delhi if he found the time, and Father accepted the invitation. The world took notice, he said, as an uneducated camel driver from the desert made his way to the Prime Minister’s mansion, all expenses paid, and dined with his staff. Although the euphoria of the visit rose and plunged like a hump, the story soon forgotten and life settled into reality, Father said it still filled him with pride. On that dining table, there were no spoons or forks, he said, the ministerial staff ate with their hands.

I left my village thinking Father’s story was entertaining but not believable. Soon the city con- sumed me, milked my emotions so dry that I mourned only too briefly Father’s death within a few years of my leaving the village.

I don’t know why I have returned now, just me, without my wife or children. Perhaps they symbolize something that lured me away from the sands, and I wish to grapple alone with nostalgia, even languish a little. When I had talked to my uncle a few months ago about Father’s story, he smiled indulgently and showed me old newspaper clippings of the incident.

Now, streaks of fireworks race across the cloudless sky. It is New Year’s Eve, I realize. The moon seems larger, and everything more charming than what I recall. In fading light, against the horizon, small outlines of camel drivers and their animals returning home appear like marching black puppets on wind-whipped sand.

The silhouette approaching me turns out to be my hoary neighbor but the camel with him is indeed Kalu. “Here he is,” he says beaming, “I told you; they live longer than you think.” I watch my neighbor walk away, and then turn to Father’s obedient son, age showing in his face as he munches on something, streaks of black below his eyes as if he has been crying.

A blanket under me, my backpack below my head, I fall asleep listening to the once familiar sounds of open, rippled desert, peering at the star-lit heavens that I had forgotten to notice in the city. Father looked so youthful in those pictures from uncle’s old paper clippings, so much younger than the man in my memories. It is perhaps because the face I often recall is the one I saw by the campfire when he asked me for the last time if I was sure.