COVID-19  In-depth info for Indians in Atlanta/Georgia. Click here
Home > Magazine > Features > Film Review: All about Laal (It’s all about us)

Film Review: All about Laal (It’s all about us) 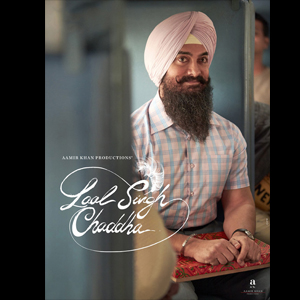 The success of the Bollywood remake of Forrest Gump may depend less on the film’s merits and more on the audience’s values.

In recent times, Bollywood has made many successful remakes of super hits like Mrs. Doubtfire (Chachi 420). They have even made multiple versions, with minor variations, of a Hollywood film. For example, The Godfather was remade over and over—into Dharmatma in 1975, Dayavaan in 1988, Aatank Hi Aatank in 1995, Sarkar in 2005, Sarkar Raj in 2008, and Sarkar 3 in 2017.

So, when Bollywood superstar Aamir Khan set out to remake Forrest Gump, expectations soared understandably high. Aamir Khan has been a surefire moneymaker. His Raja Hindustani (1996) is the fourth-highest-grossing Indian film since the 1990s. In 2001, as actor and producer of Lagaan, Khan became a national symbol. He has the right combination of talent, charm, and credibility for the Indian version of Forrest Gump, and he has executed the role admirably.

The adaptation of Forrest Gump to Indian culture and characters has been seamless although the effort reportedly took ten years. America’s troubled post-War history provided a pithy backdrop to Forrest Gump. Likewise, India’s kaleidoscopic history adds spice to the Laal chronicle. For the most part, the script of Laal Singh Chaddha is a carbon-copy of Forrest Gump except for the replacements necessary for the Indian stories it tells.

The Indian version’s success may depend less on the film’s merits and more on the audience’s values.

As the world’s two largest democracies, India and America are shining examples of progress on a scale never seen in human history. Each is a product of self-inflicted wounds (Civil War and Partition, respectively) and historical sins (slavery, racial, religious, and caste discrimination) but both nations have been transformed by continuous spurts of social and political reforms.

The main character, in both films, is a naïve man of modest intelligence whose life is buffeted by random coincidences but somehow manages to become a celebrated athlete, a decorated veteran, and a successful businessman. All this while the society around him is roiled by systemic forces of violence, bigotry, corruption, and decadence.

Forrest Gump took a wide swath of American history (ranging from Klan-era racism and segregation to the wanton brutality of the Vietnam War, the Draft, the cult celebration of college athletes, Watergate, assassinations, drugs, and hippie culture) and wove them intricately into the life of its main character.

The irony and contradictions juxtaposed into Forrest Gump’s life left the audience perplexed, if not perturbed. After initial praise, however, the film fell prey to understandable revisionism. The film has been progressively assaulted for the incongruities of a white male naïf becoming a celebrated hero in a country troubled by racism and inequalities. A 2019 article in IndieWire declared, “‘Forrest Gump,’ 25 Years Later: A Bad Movie That Gets Worse With Age.”

Laal Singh Chaddha did not have to wait long to be pilloried. Right from the day of its release, it has been facing scathing criticism, particularly from Indians, for peculiarly Indian reasons.

Laal Singh Chaddha’s tapestry is shallower. Laal’s story starts with the 1984 siege of the Sikh Temple in Amritsar, Indira Gandhi’s assassination, the backlash against Sikhs, and the 1999 Kargil war with Pakistan. The film offers glimpses of India’s 1983 World Cup cricket championship, Mandal Commission protests (1990), Babri masjid’s demolition (1992), and Mumbai blasts (1993) but these are not embedded into the story’s mosaic. Other tumultuous parts of Indian history, such as Kashmir, Rajiv Gandhi’s assassination, India’s audacious nuclear tests, and rapid economic growth and inequalities, are conspicuously absent from the narrative. As a result, the film is unable to hold the mirror up to India in the same way Forrest Gump did to America.

The portrayal of Laal as a low-IQ soldier has angered some Indians who take great pride in their military and its gallant performance in combat. India’s army is also a large and coveted employer for the country’s growing young population. By contrast, Americans opposed the Vietnam War and its veterans came home to face ignominy and even hostility.

Ironically, the greatest virtue (or sin) of the Bollywood version is the one deviation it chose to make from the American original. Forrest Gump’s protagonist, as a soldier, used his athletic prowess to save a Lieutenant in the American army. By contrast, Laal is shown rescuing several men among whom happens to be an enemy combatant—a Pakistani terrorist, no less! The rescued terrorist eventually becomes Laal’s business partner and returns, presumably to Pakistan, to become a remorseful peace- loving philanthropist!

The idealism implied in this humane departure from the original is admirable and thought-provoking. Instead, this has spawned not only criticism but a rude boycott against the film, organized by politically motivated vigilantes. This is an unwarranted reaction to this benign and well-meaning film.

Saving a terrorist’s life? A reformed terrorist? Such notions appear to be anathema in today’s world, where even a minor gaffe from years ago could get a person “canceled” with no room for redemption or forgiveness.

Making matters more complicated, Aamir Khan has voiced concerns about the growth of anti- Muslim sentiments in India in recent years. Most Indians deny this or do not like to hear or talk about it. India continues to remain on edge about Pakistan- inspired terrorism. Although large-scale terrorism has declined significantly, cross-border incursions continue to menace India. Indeed, the week that Laal Singh Chaddha was released, four Indian soldiers were killed in a shootout with Kashmiri rebels allegedly inspired by Pakistan. In these circumstances, the idea of saving or reforming terrorists looks like contrived appeasement to some Indians.

But, isn’t this just a movie? If we cannot imagine the idea of a reformed terrorist, even in the world of fiction, what are we left with? When art is forced to imitate life, what can we say?

Quoting a famous line from the two movies, whenever Forrest or Laal is frustrated and flummoxed about something, he declares: “That’s all I have to say about that…”

John Laxmi is an American of Indian origin based in Atlanta, GA.