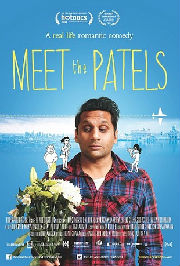 Cast: The Patel family: Ravi, Geeta and their parents Champa and Vasant

As an Indian and a Gujarati, I found myself squirming uncomfortably at the candid, if lighthearted, exposé in Meet the Patels of what appears to be a clannish and orthodox community. Of course, I also found myself smiling with a familiar nod at the seemingly comical and outdated process of matrimonial matchmaking that makes the central theme of the film.

Meet the Patels is a film documenting the process of seeking a suitor for Ravi Patel. Ravi is the archetypal second-generation Indian-American—a blend of the modern and the traditional, the Western and the Indian. Unknown to his parents, he has had an American girlfriend for two years. Despite having great chemistry with Audrey, his girlfriend, when it comes to marriage, Ravi is in a dilemma. He has grown up seeing the success and joy of marriage and family in his traditional extended family, and in the larger close-knit Patel community. He feels, for the long haul, he would truly be happy only with someone from such a similar background. And so, soon after breaking up with Audrey, during a family trip to India, Ravi agrees to allow his parents to launch a search for a bride for him through the traditional methods. Thus begins a 2-year quest for a suitable match for Ravi, which of course is a project taken up not only by Ravi’s parents, but also by relatives in the extended family and community.

Somewhere along the lines, Ravi and his sister Geeta, the former an actor and the latter a documentary filmmaker, thought it would be a great idea to document the whole bride-hunting and matchmaking process, and so it starts—at first, just as a home video. Soon the unravelling narrative is getting captured on film, as uncles and aunties are making recommendations, biodata sheets are flying in and out, and matrimonial conventions are attended. And it all continues when the family comes back to the U.S. where Ravi is set up on dates with other Patel girls.

Seen from the perspective of the mainstream (where the film is getting some exposure), the Patel clan—which, incidentally, is not too far removed from the larger Indian culture when it comes to matchmaking—seems extremely quaint, if not downright xenophobic in its insistence on marrying within the clan. But the genius of the film is that despite its cringe-inducing honesty (which is also the ace up its sleeve), it manages to unravel, slowly but convincingly, that the elder Patels—the parents of the protagonist Ravi, are, after all, not closed-minded bigots who feel that their children are too good to be married to anyone but a Patel. The film manages to portray that the ways of the old, no matter how unromantic they may appear at first glance, are anchored in the wisdom of pragmatism—one that has produced happier marriages in high numbers than in the West where most would scoff at the businesslike approach towards finding a life partner. What eventually absolves the elder Patels is that while insisting on the proven pragmatism of their ways, they are, when it comes right down to it, also open-minded enough to accept the truism that love knows no bounds of caste, creed, race, or nationality.

What makes this a unique film is the courage of the makers to turn the camera on themselves through a challenging and personal episode of their life. And so we get to witness, without filters of fiction, the raw exchanges, and generational wrangling between Ravi and his parents, while sister Geeta’s only role, for the most part, is to document it all on film. The often repeated lament of mother Champa that Ravi doesn’t seem to be open-minded or committed enough to the process strikes familiarly exasperating to the younger audiences who are tipping their hats off to Ravi for being such a trooper.

Despite its origins as a home video, the production value of the final product is a testament to the film and acting affiliations of the Patel siblings. The elder Patels, meanwhile, deserve credit for not only playing along with the filming of a very personal family saga, but also playing their part well by, ironically, pretty much ignoring the camera rather than succumbing to the self-consciousness it can induce.

The process of “hunting” or campaigning to find a life partner that the film portrays in impeccable detail may also be quite a buzzkill for the romantically inclined. And yet, once again, the film actually manages to end up being quite romantic indeed. Along the way, Meet the Patels makes you question and laugh in equal measure. But it is in its final twist that it manages to compete with the most idealistic of romantic feature films in its message of how love triumphs over all—even age old traditions, clan, and community.